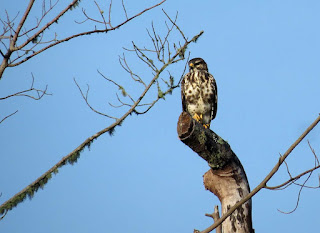 We had pretty much cleaned up in Huatulco, so we decided to use the morning to gain some elevation and try to find a different set of birds. We would be traveling on the road we were going to on the following day, but it deserved a good bit of time. We stopped on Pluma Hidalgo road and heard the eerie call of a Thicket Tinamou nearby. Several Red-crowned Ant-Tanagers dodged on and off of the road. This particular sub-species has a rosier colored crown. Golden Vireos were showing well. We had three Citreoline Trogons and six Spot-breasted Orioles. Happy Wrens sang from the scrub. (They really are called Happy Wrens.)

We went a bit further north and up slope and parked where a young Gray Hawk was perching. We didn't bother him one bit. Several people saw the Dickey's race of Audubon Oriole, which I missed, unfortunately. A Wagler's Emerald Toucanet showed off a bit. The views were incredible! We heard both Ruddy and White-faced Quail Doves calling. We started finding some hummingbirds.  A femail Golden-crowned Emerald perched up nicely. Blue-capped and Berylline Hummingbirds fed on the flowers. A couple of Collared Forest Falcons called, but couldn't be drawn in. There were flycatchers , Sulphur-bellied, Dusky-capped and a Greater Pewee. We had a very range restricted butterfly, a Solitary Bolla. It isn't much to look at, but it was probably the rarest bug of the trip. 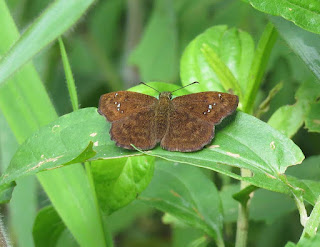 We stopped for lunch at a little restaurant along the road. There was a public restroom with a big metal turnstile that charged a couple of pesos. Everyone entered at the same spot, and then there was a small hall where you went left for the women's room, or right for men's. A nice bathroom is a good thing, but this one was even better. There were fabulous moths all over the wall, including a couple of  huge red, black and cream colored monsters, longer than my thumb. After the other women left, I called Martin over to see, as the best ones were on our side. Lunch was good. I was starting to be able to eat a bit more each time.

We made one more stop, a small grassy trail, even higher up which was stuffed with Blue-capped Hummingbirds. We also had a Garnet-throated Hummingbird. Several people walked further down the trail, but I was lazy and stayed up closer to the van. Their efforts were rewarded by seeing a couple of Mexican Hermits, a hummingbird that was recently split from Long-billed Hermit. We stayed for about an hour and then headed back down towards the sea. We would return to this area on the following day.

We drove the winding roads down to Puerto Angel, a small beach town. Michael knew a boat operator there and we were going to do a "mini pelagic" to a huge rock a couple of miles away that has many, many boobies roosting. Michael found him and arranged for us to go. The boat was a lot smaller than the one the day before, not much more than a large skiff with a sun screen. Michael said that he had used this boat for actual pelagic trips and I was shocked. I couldn't imagine going far out in this little thing. They pulled it up on the beach, but you had to wade to get in, dodging the waves. We all took our shoes off and left them in a little restaurant. Martin chose not to go, as the sun was very bright and he burns very easily. I got my freshly washed jeans soaked to the knee, but it was the price I had to pay. Little did I know what would happen later.

We took off and headed out of the small harbor. A Red-footed Booby was one of the first birds we saw. This was a surprise, as they tend to be more deep water birds. We skirted the coast, which was peppered with gorgeous beach homes. We passed a well known clothing optional beach, but it was not occupied, at least that I could see. No, I didn't use my binoculars to check. The rock loomed in the distance and  boobies flew back and forth. A Royal Tern, the only one of the trip, passes us. Magnificent Frigate Birds soared overhead. We reached the rock and went around it a couple of times. Brown Boobies were the most common, by far. There were several Blue-footed Boobies and we had one young Masked Booby, which gave us a five booby trip. (Only in birding can you say something like that!) A group of Bridled Terns flew in and then back out. The waves crashed on the rock. It was very impressive.

The boat sailed back and got to the beach. They pulled it up again, and we all started to get out. Since my jeans were already wet to the knee, I wasn't worried about the water. I swung my legs over the edge and started to get out, when a large wave struck me, knocking me down. I was freaking out about my camera, but one of the men who pulled the boat up, grabbed me and threw the camera up over my shoulder, so it did not get wet. That was about the only thing that didn't get wet. My binoculars went in, but they are waterproof. Thank you Zeiss. When I got to the van, Eddie took one look at me and motioned for me to wait. He didn't want me sitting on the seat of the van. I had my rain jacket, so we put that over the seat and drove back to the hotel. I was actually glad to get to go into the Pacific Ocean. :-)
Photos for the day:
https://www.flickr.com/photos/sngcanary/sets/72157656554646816

Sounds like a fantastic outing! Congrats on the 5 Boobies! That's an impressive day. And glad the camera did not get wet.