My impressions of India. 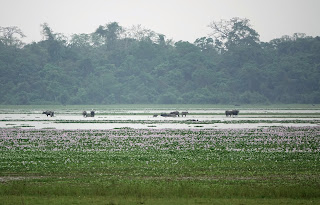 This is going to be a bit rambling. Please forgive me.  We only saw a small part of India, mostly in the far northeast, a part the average American would never visit. It was very different than the mental images I have had of India most of my life. This was not the "Junglebook", or the slums with Mother Teresa standing in the middle of a throng of people. It was not "filthy", a term an American birder had used describing India. Obviously, there was some culture shock, but I felt very comfortable in the towns and countryside. The northeast has some of the most spectacular scenery I have ever seen.  The parks in Assam made me feel like I was in a safari movie, with the rhinos, elephants, and water buffalo. Parts of Arunachal Pradesh put me in mind of Tibet, with the gorgeous mountains, Buddhist shrines and stupas, and prayer flags draped everywhere. 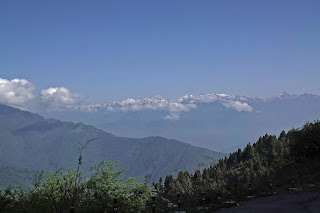 Almost everyone spoke English and most of the signs were in English, though sometimes with very amusing misspellings. I am embarrassed that I sometimes had difficulty understanding people due to their accents.  I hated feeling like an ugly American when that happened, but everyone was very patient with me and didn't seem to mind too much repeating themselves. I don't recall a single person who was not very nice to me. 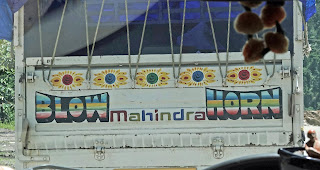 Traffic in this part of India is insane, but not because it is bumper to bumper. How can you drive down a two lane road, with people passing in both lanes and cows standing in the middle of the road and not have accidents? I am sure they must, but we didn't see any while we were on the road. The drivers seemed to be very aware of what other people were doing and adjusted their speed and their position on the road. One thing they do, though, is honk their horns continuously, which was a bit jarring for me, initially. Most of the trucks have "BLOW HORN" painted on the back of them, and people do all the time! Mike said that this is because the truck drivers want to be aware of people behind them and passing them.

The food in India was so incredibly good. I eat at Indian restaurants here fairly often, but we had so many more dishes than the standard curries we get here. The heat level of the spice was less than I expected. We ate quite often at tiny restaurants on the side of the road, which were all great. In Arunachal Pradesh there is a Tibetan influence in many of the dishes, with dumplings being one of the mainstay foods. I am very much a carnivore, but I was quite happy eating vegetarian for much of the trip. Coffee was a bit of a problem. I am not a huge fan of instant coffee, which is what we had mostly. I learned very quickly to enjoy hot tea. Don't expect to get wine at the "wine shops." They are small liquor stores and I was disappointed that they don't carry gin, either, but the whisky was OK.

I mentioned this a couple of times in my day by day posts about the trip, but I wanted to talk again about people taking our pictures. There were a number of places where we were asked to pose for photos. Sometimes when we were walking on roads I would see people driving by snapping shots with their phones. Anyone who knows me is aware I HATE having my picture taken, but I didn't mind. I figure who do I know who will see them?  I found it really funny that we were such a novelty.

I was really surprised at how relaxed people were about things we would have apoplexy over in the United States. Kids, even preschoolers, played and walked along the roads. It wasn't unusual to see a family of four crammed on a motorcycle with no helmets. Of course everywhere we went cows and other animals were wandering in the streets. 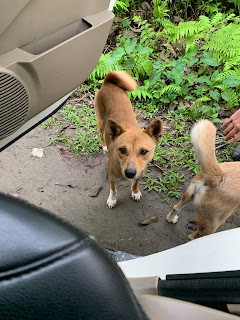 Speaking of animals, I was so surprised at how sweet the dogs were. Of course, some of this was probably because I was constantly slipping them part of my breakfast when we ate on the road. Most of the dogs in the lower elevations reminded me of Basenjis,  short-coated, medium sized, with pricked ears and tightly curled tails. If I could have a dog, I would have one of them in a minute! The dogs are higher elevations had much thicker coats, for good reason, with floppy ears, and seemed a bit more aloof, though not unfriendly. The smaller ones reminded me of Tibetan Spaniels.

Our trip was set up by Mike Prince of Bubo Birding, and Asian Adventures. The two local guides we had were great! We were so lucky to have Mike go along with us, both for his skill and great company. The accommodations were a mixed bag, ranging from a very nice resort, to a hotel with sketchy electricity, to a thatched roof cabin, to tents with rock hard cots. Bathing with a bucket of hot water and large mug was not as bad as it sounds. It was the most adventurous trips I have ever done. Willie says it was the best birding trip he has ever done, and I think I agree. I would very highly recommend going to northeast India.

I saw 371 species of birds,  which I won't list here for brevity's sake, with 162 of those new for me. We spent two weeks actually birding, so I feel this was great. My mammal list is much, much lower, but every bit as exciting to me! Here is my list: