Monterrey, we did it! 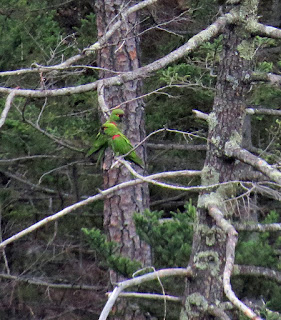 Monterrey Nuevo Leon is only two and half hours south of Laredo, TX. We have wanted to go birding there for years, but because of the problems with drug cartels we didn't dare. There were two species in particular we were interested in, Worthen's Sparrow and Maroon-fronted Parrot. It was so close, but everyone told us it was way too dangerous. Then, our friend Martin Hagne told me about a guide named Rene Valdes. Rene was taking people to a couple of locations in northern Mexico again. In addition to Martin, our friends Michael Retter and Matt Hale went with Rene last year. We decided it was time.

We contacted Rene and set up a short tour. We made arrangements with Rene to pick us up in Laredo on Saturday, August 4th. We left San Antonio at about 5AM. Rene was meeting us at the long term parking lot at the Laredo Airport. (Secure parking is only $5 a day!) While waiting we found a pair of Tropical Kingbirds working the trees by the airport entrance. We figured it was a good omen. Rene was a little delayed getting through the border crossing, but arrived at about 9AM. After filling up with gas, we crossed the border. Going into Mexico is a snap. They didn't even check our passports.

We stopped for an early lunch on the way and headed to Rene's location for Worthen's Sparrow near San Rafael, south of Monterrey. This grassland sparrow is endemic to northeast Mexico and is listed as endangered, due to habitat destruction. There is a single historic record for the United States, a bird collected near Silver City NM. It isn't a flashy bird, resembling a Field Sparrow. As we drove into the habitat we saw a group of Mexican Prairie Dogs, also endemic to the area. A Burrowing Owl flushed from one of the holes. We turned on to a dirt road and started our search, with no luck. Rene said the birds often perch on the fence lines along the road we drove in on, so we went back and drove up and down, again with no luck. We returned to the dirt road and Martin spotted a distant bird sitting on a stalk of grass. We got in the scope and our efforts had paid off. We got in the car and drove down the main road, level with where the bird was and found a second one perched up. Both birds were farther off than we had hoped, but we were still very happy. The clouds rolled in off of the mountains and it started to rain. 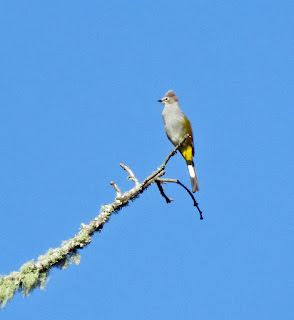 Luckily the clouds were moving out of our next stop, Carretera de Monterreal. This road into a very posh resort area is great for montane species. We stopped just before the entrance gate and quickly found a couple of Colima Warblers, several Slate-throated Redstarts and a Russet Nightingale-Thrush. The pine forest reminded me more of Colorado than Mexico. There was even a ski run! We drove further in and found a Pine Flycatcher, a Black-headed Grosbeak, Brown-throated House Wren, a couple of Yellow-eyed Juncos, several Rufous-capped Warblers. and a gorgeous Gray Silky-flycatcher. A Pine Siskin joined a young Western Bluebird, sitting on the top of a pine tree.  Rufous-capped Brush-Finches were common. One of the best things for me was hearing Brown-backed Solitaires singing. It is my favorite bird song, sounding like a waterfall of broken glass. Martin and I were very impressed with the road. We drove back to Monterrey, where we spent the night.

Rene picked us up at the hotel a bit before 6AM to go look for Tawny-collared Nightjar and Blue-capped Motmot. He had a location where the nightjars have recently been found. We drove in and flushed a Northern Pauraque on the side of the road. We stopped and Rene played a tape of the nightjar calling, hoping it would respond. A couple of Ferruginous Pygmy-Owls were tooting away. It was just starting to get light enough that we could see when the nightjar flew over our heads. It wasn't the best look, but it was enough. As soon as dawn broke Rene found a couple of motmots. We drove around the area and picked up a few more common birds, including an Eastern Screech-Owl.

We drove into town for some fabulous tacos. We had a fairly long drive ahead to our final destination for the night, Cabanas Mesa del Oso, up above Monterrey in Cumbres de Monterrey National Park. The road up has spots for our main target, Maroon-fronted Parrot. This is another endangered bird, endemic to northeast Mexico. They nest in holes in large limestone cliffs. Rene had studied this species extensively when he was in university and guaranteed us we would see it. I always shudder when someone says we will absolutely see a bird. That usually is the kiss of death, but we were hopeful. We made a stop at a small shop to get food for lunch, dinner and breakfast for the next morning, as there is no restaurant at the cabanas.  A large cliff loomed above where parrots are often seen, but none appeared while we waited for the food.

The drive up to the cabanas gets very rough. We were lucky in that it was not muddy. I can't imagine going up without high clearance, but we did see some cars on the road that were somehow getting through. There were a number of very loud ATVs, blasting music and roaring by. We parked on a pull off below a very high precipice. The sound of parrots echoed everywhere. Looking up, we could see small flocks circling high overhead. Rene delivered! As we stood there several birds swooped down to a ridge lined with pine trees. One pair almost took my hat off. The noise of their wings was awesome. We stayed and enjoyed the show for quite some time, taking mostly digi-scoped photos and even some video. I got a few very poor pictures of the birds at their nest holes.

We enjoyed birding the road very much. Painted Redstarts flitted around all along the road. More solitaires sang in the pines. Rene had told us that Golden-cheeked Warblers were the most common warbler, so when I spotted a bird moving through the pines with a black throat and a yellow face, I called out Golden-cheek! I was a little embarrassed when Rene corrected me and said "No, Black-throated Green!" It was very early for this species. Even in Texas it would be a rare sighting this time of year. There were actually two of them. The road led us over a pass and we dropped a bit to Mesa del Oso.

The setting of the cabanas is spectacular. Our cabin had an incredible view of a forested canyon between two high mountains. The temperature was delightfully cool. I ended up putting on a light jacket. it had been quite cloudy, but suddenly the sun broke through a little. A few butterflies started flying and I got a couple of photos. Wandering down from the cabin I found some govenia orchids. We did some birding around the area, but did a lot of just sitting and talking, enjoying the view. Later after dark we had three species of owls calling, Northern Pygmy-owl, Whiskered Screech-Owl, and best of all, Mexican Spotted Owl. Spotted Owl has been my nemesis bird for years, so I was very excited to actually see one in a pine near the cabin.

In the morning we birded around the area until about 10AM. We had both Mountain and Elegant Trogons, Greater Pewee, Crescent-chested Warbler, more Painted Redstarts, Bridled Titmouse, Hepatic and Flame-colored Tanager, Audubon's Oriolesand a few other birds.  A Northern Pygmy-owl was singing right off of the road. One of the Elegant Trogons took a swipe at it, flushing it off of the tree. We saw a few butterflies, but nothing new. We were driving not only back to Monterrey, but to Laredo, so we started downhill. We made a few stops, including at the parrot cliff. Some butterflies were flying along the road and we photographed a few, including a very beat up Teal Beamer, a new species for me. We made one more stop in Monterrey looking for Golden-Olive Woodpecker, which we have seen before, but that form may be split into a new species in the future. Unfortunately, we didn't find one. After being up on the mountain, the heat was more than noticeable. We drove back through Monterrey and on to Laredo. The border crossing into the United States had a very long wait, with passport checks and a few questions. We got back to our car at about 8PM and were home by 1045PM.

The whole experience was incredible. Monterrey was so different than what we expected. The city is very nice. It is so hard to believe it is so close to the border. There is no where like this in Texas, or really, anywhere in the United States.
. We never felt unsafe. In fact I feel less safe in parts of San Antonio. I asked Rene if this was something we could do on our own. He said yes, but with a few caveats. He said it would be best to drive down on the weekends and to always travel during the day. He advised getting gas before crossing the border and not stopping until close to Monterrey. I would highly recommend Rene as a guide, but unfortunately, he is moving to the Yucatan peninsula for work, and probably won't be available in the future. I asked him if there were any other guides in the area, and sadly he said no. We really hope to go back, maybe with a few friends in the future.