Not traveling, but still birding. Our amazing postage stamp yard. 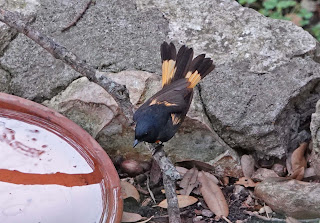 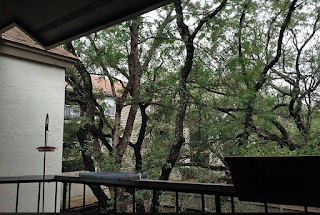 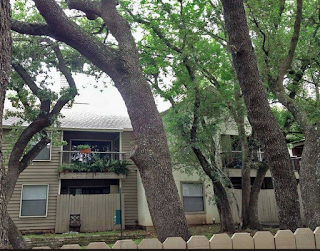 I normally use my posts to tell about our birding travels, but all of that screeched to a halt in mid-March, when the Covid 19 pandemic hit Texas and the rest of the world. Today I was thinking about how this changed our birding for the year. I am not sure if it is of interest to anyone, but what else do I have to do?

We live in an apartment complex in the middle of the medical district in San Antonio, TX. We moved here a little over eight years ago. When the manager showed us this apartment we walked into the front door, saw through the sliding glass door to the backyard and said that we would take it, even before seeing the rest of the apartment.  The balcony of our second floor apartment sits in the canopy of a group of mature live oaks. Even though the yard it not much bigger than a basketball court we immediately saw the potential for birds. We knew it would be good, but we had no idea just how good it would be.

We started a "balcony list" as soon as we moved in. As it was July, there wasn't a lot of variety, but it was nice to see breeding birds, like Black-crested Titmice and Golden-fronted Woodpeckers. As soon as fall migration kicked in we added quite a few new birds. We ticked along, adding winter residents and then spring migrants, particularly warblers. I was working full time, so my home birding was limited. By the end of the first year we had 56 species for the balcony. We continued to add birds. I switched to working from home about a year and a half after moving, which helped a lot. We finally got to 100 species in April of 2019. We had a number of extremely good birds, including a Broad-billed Hummingbird visiting my shrimp plant in January 2015. Spring migration was the most fun. We had accumulated an impressive list of warblers.

Then 2020 came along. I was furloughed from my job in corporate travel in March. We took covid very seriously, self-quarantine immediately.  Martin stopped doing his consulting work. There was very little to do other than sit on the balcony and look for birds. My time birding went from less than an hour a day to all freaking day long every day. OK, maybe not all day, but I was probably averaging five or six hours. Martin was spending a good bit of his time there, too. When we starting sheltering at home our list was at 106 species. We thought we wouldn't add much, but we were wrong. 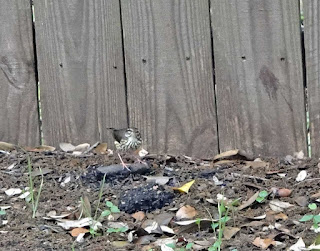 The first new bird I found was a Louisiana Waterthrush that literally dropped in on March 23. We have no water in the yard, other than a couple of clay plant saucers under the trees. I had never seen a Louisiana away from water before. We would go out close to dawn and scan the tree tops. Birds would come in and feed, then take off moving north. Some of the fly-over birds, like Upland Sandpiper, and Black-necked Stilt were surprising, to say the least. As I said, we had a great warbler list, 24 species before quarantine. We had repeats of almost all of them, including a couple of Golden-winged Warblers. In the past we had seen three or four Ovenbirds total; this past spring we had at least ten. Our "best" sighting was a female Cerulean Warbler on May 12, a new county bird for me! 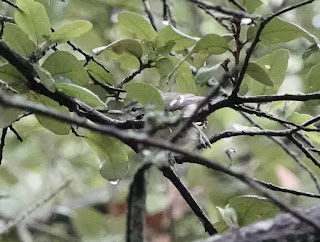 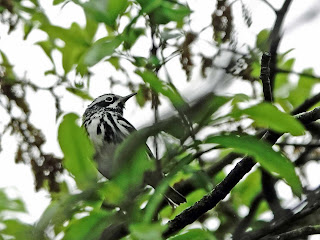 Even after Spring migration I continued birding every day, though not for as long a period. I can only stand so much Texas heat. I had some surprises in summer like a Eastern Wood-pewee in June and a female Painted Bunting in July who stayed just a minute before she took off.  A pair of Black-and-white Warblers, also in July, were a surprise.

Soon some fall migrants started arriving like empidonax flycatchers and Summer Tanagers. In early September I spotted an Eastern Kingbird and numerous Baltimore Orioles. I was lucky to find another new warbler species, a Mourning. I added balcony bird #131 a couple of days ago, a migrating Northern Harrier flying over,

As I said earlier we had 106 species for the back yard when the pandemic started. We now stand at 131. More surprising is our total list for the balcony just this year is 109 species! Considering it took almost seven years to get to 100 species, we were very pleased. This included 25 species of warblers, 12 species of flycatchers, and six species of vireos. Our all time warbler total is 27 species!

As I said, the yard it tiny. The only under-story we have are two tiny clumps of ligustrum. We worked very hard this year. Other than a very few day trips to close areas we have stuck to birding the apartment complex. I believe many people could significantly increase their yard lists if they put in the time. We do have a bird feeder and the plant saucer "water features", but most of the sightings have been in the trees. We pay attention to weather patterns. We found that frontal passages would cause drop-ins. The Cerulean Warbler was here during a little rain shower.