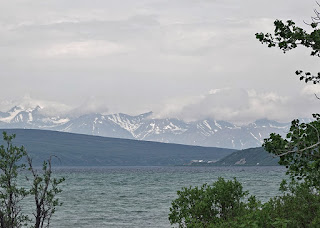 I work in corporate travel. I chose this line of work because I love to travel and there used to be a lot of benefits. Unfortunately, those have shrunk over the years, but I still get one pair of tickets each year to fly domestically. About a month ago we started talking about using them. Our first thought was Maine, as I have never seen Atlantic Puffin, but I couldn't find the right availability that I needed on any of the airlines that I could use. But, I could get flights to Alaska. Martin suggested Fairbanks, as there are a number of butterflies there with a limited range, and we each needed two species of birds there. The prime time for the butterflies was late June. I checked if I could get the time off, and I booked our flights!

We left on June 22, flying on United from Austin to San Francisco, and then on to Fairbanks. We arrived just before midnight, with the sun still shining. We had to wait on board the plane for an extra 20 minutes or so, as the first jet-way wouldn't work. This did not make us particularly happy. Finally, we disembarked. After collecting our baggage and the rental car, we checked into the Holiday Inn for six nights. (If you go, the hotel was great.) We fell into bed, exhausted, not sure of what we would do the following day. I thought we would sleep in, but no, we were up in less than five hours.

The weather did not look good for butterflying. There was some light rain and the area we had talked about going to, the Steese Highway, northeast of Fairbanks, looked like it would be having rain for some time, so we decided to head south. Arctic Warbler, a bird we both needed, breeds in this area, near Paxson. Martin had seen records of Long-tailed Jaegers and Smith's Longspurs nearby by Tangle Lakes. We had seen both species outside of breeding season, but one can never see enough of either. There were also some butterflies we wanted, so our decision was made.

We drove south past North Pole, which looked like one big tacky Christmas wonderland. We did not bother to visit any of the ornament stores. It was a rather lengthy drive to the area we wanted to start in, about three hours, but we still made a few stops. I spotted a flock of  nine White-winged Scoters at Birch Lake. A bit further on there was a pair of Trumpeter Swans, which I not regret not photographing. Our first mammal of the trip was a Snow-shoe Hare, on the shoulder. Shortly after that, a Mink ran across the road! Getting closer to Paxson, I spotted an Arctic Tern. Herring and Mew Gulls were common. 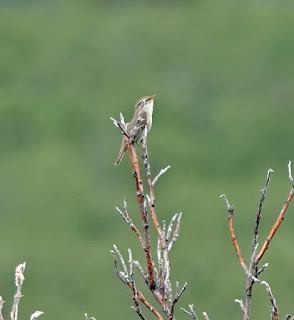 We finally reached our turn to Tangle Lakes on AK 2 W, and a good spot for Arctic Warbler. We pulled over and immediately heard them singing. One was sitting up on one of the small willows and I was able to get several photos, though none were fabulous. This was a new bird for both of us. We each had one more possible new bird, though these were different ones for each of us. White-crowned Sparrows and Yellow Warblers were singing. We had at least five Arctic Warblers.

We reached the Tangle Lakes area, but had not seen either long-spurs or jaegers. We stopped at a small lake, where a Common Loon was snoozing close to shore. He finally lifted his head and gave us a dirty look. There was a nice spot of tundra, so we walked in to see if we could find some butterflies. It was really wet and very squishy. Because of a stupid error, bringing a mismatched pair of sneakers, both for the right foot, I was wearing leather walking shoes, and did not really want to get them soaked. It was exhausting slogging around, but we did see a few butterflies and lots of wild flowers. As Martin wasn't hampered by his footwear, he was some distance from me. I heard him shout and point. A Rock Ptarmigan was flying across the tundra, diving into some willows along the road. This was the second life bird I needed! Needless to say, I was more than happy.

We had a late lunch overlooking the largest of the lakes. The food was OK, but the view was astonishing. We started back and saw two birders heading out over another portion of tundra. We stopped to chat and they told us they were looking for Smith's Longspurs, but it was at least a mile walk. We said, "Good luck!" and went on our way. Neither of us were up to a mile long hike. We also had no sightings of Long-tailed Jaegers. 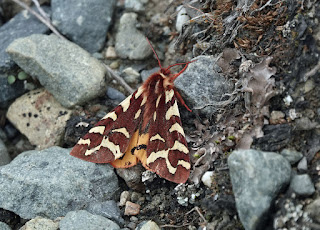 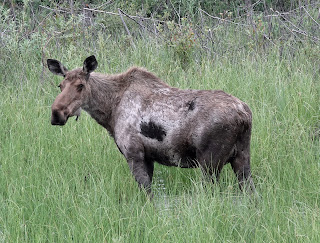 The mountains were so gorgeous. We got great looks at Gulkana Glacier, with clouds rolling down it. I found a fabulous looking moth, that rivaled any of the butterflies we had. The wildflowers were mind-blowing. Unfortunately, most of the flower photos I took are on my phone, and I don't know how to transfer them to my Flickr page. We saw our first moose of the trip, not far from Paxson. We saw four more, and I finally got a decent photo of one by the side of the road. We arrived back in Fairbanks after 8PM, exhausted but happy.