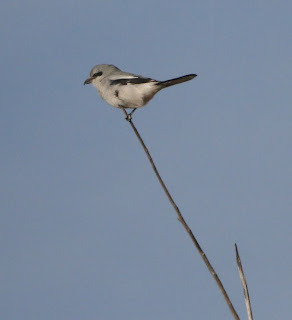 Last week Martin and I did a three and a half day trip to the panhandle. The weather was surprisingly warm. In December I expect to freeze my toes off, but the temperatures were in the high 60s, maybe 70s. I believe the lack of cold weather effected duck numbers dramatically, but despite this we did quite well.

Our first stop was in Lubbock county, on Saturday December 1 at about 11AM.,  where we saw the Northern Shrike that Cameron Carver had found the day before. The bird put on a great show, including grabbing an unidentified sparrow out of the brush under the tree where we found him. We also visited the Becta Cemetery Playa, which is nearby, where Steve Collins had all four longspur species that same day. We did see clouds of longspurs coming in to drink, but could only pick out Laplands and McCowns. Driving north we found numerous flocks of "white-cheeked" geese, finding both Cackling and Canadas.


We drove up to Fritch, which is on the east side of Lake Meridith, where we met Barrett Pierce, who was unbelievably gracious enough to accompany us for that afternoon and the next day. Barrett has a wealth of knowledge both about the birds and the panhandle itself. We can never thank him enough! We started birding in Fritch itself, where we found an aberrant House Finch with a pink head! It was a really striking bird, closely resembling the old world species, Long-tailed Rosefinch. Other passerines included a good number of American Robins, Cedar Waxwings, Dark-eyed Juncos and Blue Jays, which were a bit of a surprise for me. We had hoped to find something a bit rarer, like a Bohemian Waxwing, but had no luck.


We skirted the shore of the lake moving from Fritch up to the dam, making several stops. The water levels were frighteningly low. We had some ducks, including Common Golden-eye and a Greater Scaup up by the dam. What we didn't see were any Common Mergansers, which should live up to the name Common in December. We found several American Tree Sparrows at the Cedar Canyon boat launch area. White-crowned Sparrows were abundant. Barrett told us there is a Golden Eagle that frequents the area around the lake, but all we saw were Balds. Some Ring-billed, Herring and Bonaparte's Gulls were loafing in several locations. I saw a distant shrike that I was unable to identify; Barrett said it could have been a Northern, as one had frequented that area in the past. As we were driving from Cedar Canyon to the dam we saw a Loggerhead Shrike, one of only two we saw on the entire panhandle trip.

We spent the night in Dumas and started birding before dawn, looking for  Short-eared Owl between Dumas and Dalhart. We spotted a rather distant bird, flying to its day time roost at dawn. Barrett drove us around some ranch land, where we were very happy to find an adult Golden Eagle. A small prairie dog town produced a Burrowing Owl. We worked very hard looking for a Ring-necked Pheasant, with no luck. Barrett said three years of no spring rain had caused the population to crash. December 1st is the opening date of pheasant season, but most of the hunters were going home empty handed.  Large flocks of longspurs and Horned Larks were moving in the fields.

We went to Rita Blanca Lake in Dalhart, where we ran into Dan Jones from the valley. Dan had found American Tree Sparrows. He had been in the panhandle for a couple of days and we traded information. The lake was pretty quiet, though large flocks of Snow, Ross, Canada and Cackling Geese were moving around. Right after Dan left Barrett spotted a shrike in a tree behind the lake access. Martin and I had gone to look for a restroom, and it had flown into a bank of trees out of sight from where we were. We drove up to a better vantage point and re-found it. It was another Northern. We then birded a neighborhood where Barrett has had good luck finding rarities. We found at least six Red-breasted Nuthatches, like everywhere else in the state. Probably the best bird was a Red-bellied Woodpecker, which we saw very well. After lunch we drove up to Cactus to visit the playa. Tragically, the powers that be have decided to no longer keep water in the playa and it is
now dry. We found yet another Northern Shrike northwest of Dumas just east of where FM 281 meets RR 807. There were still no pheasants to be found.  Barrett and we parted company in the late afternoon.


The following morning, December 3, we took off for Palo Duro Reservoir, which proved to be very productive. Before reaching Spearman, we flushed a dark-morph Ferruginous Hawk off of a telephone pole. It dipped its wing, pointing to the only pheasants we saw, a pair right by the road. When we reached the reservoir we birded the park below the dam, which was really nice. We had great looks at a Townsend's Solitaire. Large flocks of American Robins, along with American Gold Finches, Pine Siskins and Northern Cardinals were visiting a small fishing pond to drink. We also had a confiding Marsh Wren. We were very excited to find Northern Shrike # 4 for the trip in this area, a young bird that looked quite brown underneath, when we saw it perched high in a tree. Interestingly, it flew in to a closer area and at that distance it didn't look nearly as brown. A small group of American Tree Sparrows was in the area. We crossed over to the lake side, where we found
Northern Shrike #5. This lake is also extremely low. We had a few common ducks, but didn't expect to find any birds usually associated with deeper water. While scanning the water Martin spotted a Pacific Loon. The rear part of the neck on this bird was light gray like in breeding plumage, not the darker color we would expect.  There were still no Common Mergansers.

We ended the day back at Lake Meridith, where we FINALLY found three female Common Mergansers at Cedar Canyon. While driving up to the dam, we found ANOTHER Northern Shrike, #6. This seemed extraordinary to us, as we had not covered that much territory. We had looked for them a couple of times in the past with no luck. In talking to several long time state birders, they also thought it was exceptional. I would suggest checking any shrike in North Central Texas this year, it might be the year for one. When we reached the dam, Martin spotted a pair of Long-tailed Ducks moving toward the dam, which was a great finish to the day. Barrett told Martin at least one was still present today.

We briefly looked for Lesser Prairie Chickens near Glazier on Dec. 4, but, not unexpectedly, didn't see any. We left as soon as we heard about the Red-necked Grebe in Dallas, but unfortunately, got the news too late to make it that day, and missed it. We found no unusual finches in any of the towns. We need to invest in some feeders to distribute up there! We saw almost no feeders at all. I want to strongly encourage you to visit the panhandle in winter. There were more than a few great raptors, including Prairie Falcon, Merlin, Rough-legged Hawk, Ferruginous Hawk and Harlan's Hawk, not to mention both species of eagles and more Red-tails than you can shake a stick at.  It is very worth while. There is ample opportunity to find some great birds. It is way past time that someone finds Texas' first Rosy Finch!

Posted by Sheridan at 5:44 PM No comments: