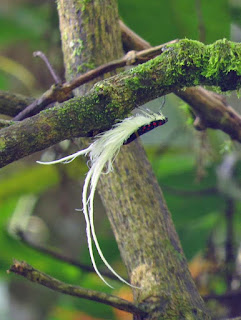 It was time to leave the coast and head inland, eventually to Oaxaca City. We had gone a way up the road we were going to be traveling the day before. We could have made it to Oaxaca city in one day, but that would have left little time for birding and the mountains held so much! Instead of making the stops lower down we had the day before, we headed up to the highest point we had birded. We arrived at about 745AM. The weather was beautiful, sunny and cool.

We walked down the trail and immediately had hummingbirds zipping overhead. Blue-capped were fairly common. We had a few Beryllines. There were at least three Garnet-throated Hummingbirds. A White-faced Quail-Dove called.  Things were shaping up pretty well. We worked the middle part of the trail, looking for Mexican Hermit. This hummingbird feeds on heliconia. Most of the flowers were finished, but we did find one or two plants that still had fresh blooms, but no hermits.

Most of us had moved a bit further down the trail, when Martin called "Come and see this!" We hurried back up and he pointed out something really amazing. He said he had been standing on the path when a large white feather drifted over his head. The "feather" suddenly veered and landed on a tree. When I looked at it with my binoculars, I could see the back of an insect, but the underside looked like long feather plumes. It was the most bizarre bug I had ever seen. We speculated initially that it was a moth, but we could see by the back that it was not. Someone mentioned it might be a leaf hopper. After we finished for the day, I did a bit of research and found it was actually called a plant hopper, a fulgorid. The white plumes are a waxy substance that the insect secretes and then sticks on its body. When a predator goes after it, the plumes dissolve if grabbed, allowing the bug to escape. How fabulous is that?

We added more birds, Grace's Warbler, Elegant Euphonia, Ruddy Foliage-gleaner, Olivaceous Woodcreeper and several species of flycatchers. Several people decided to go further down the trail, but my knees were screaming no. I also was feeling fatigued. I decided to go back to the van to rest. I chatted with Eddie, well sort of, as my Spanish is pretty sucky. I was starting to nap a bit, when Christine came up to the bus and said "They have a Sparkling Tailed Hummingbird!" This was one of my most wanted birds of the trip. I woke up very quickly, jumped out of the van and yelled "Thanks!" over my shoulder. I ran down the trail and around the corner, where they were all lined up searching. Jennifer had seen the bird and alerted everyone. Geoff had also spotted it, but then it disappeared.

We worked that area for quite a while. At one point we heard a buzz overhead that was almost certainly the bird. I kept telling myself it could come back, but if it didn't it was OK. I lie to myself like that when I am birding. Unfortunately, we never saw it again. The group that had gone further down the hill had also seen Mexican Hermit. I was feeling a little sorry for myself, but trying very hard to not show it. We moved on.

We drove up to a road with a green gate where birders are welcome. We passed through the gate and quickly found a singing Russet Nightingale-Thrush. There were some warblers working the area, including Slate-throated Redstarts, Crescent-chested Warblers and Golden-browed Warblers. A few Hutton's Vireos made it sound a bit like home to some of us. We started back and found a rather ratty looking Red Warbler. A Mountain Trogon played coy, but finally allowed a few looks.

We made one more stop before heading to our hotel. Unfortunately, this spot was not in good shape due to extensive logging.  We saw a few birds but didn't stay long. We drove on to where we were spending the night, Cabanas Puesta del Sol in San Jose el Pacifico. This village is at about 8,000 ft. We checked in and headed down hill to our cabin. To be honest, it was a bit daunting. The trails were pretty steep and my knees were still acting up. I have to admit I grumbled a bit when I saw how far it was, but then we got to the cabin. The view off of our front porch was spectacular. The cabin itself was lovely, with a fireplace in the corner. With the altitude, it gets chilly at night. We got settled and then went back up to the office, where there are chairs and tables and a fire place. I spent a little while online checking email and Facebook, and then went back to get ready for dinner.

The walk back did not seem nearly as bad. There is a restaurant next door to the cabanas that used to be part of the hotel. We are not sure what happened, but there had been a parting of ways. The hotel recommended a different restaurant back towards the village, but since the old restaurant was so close we decided to eat there. We started dinner with Oaxacan hot chocolate. It was amazingly good! My appetite was still not back to normal. I finished the chocolate and told Martin I didn't think I could eat my dinner. He said I really needed to eat something, as I had not been getting enough nutrition. I then ran into the bathroom and was very ill. I think the milk in the chocolate was just too much for me. No one else had any problem.  I came back out and told Martin I was sick and needed to go back to the cabin. He walked me back down and I sat on the porch watching the mists move over the valley below. By the time he got back, after eating his dinner I was feeling much better. He brought me my dinner and I actually was able to eat a good bit of it with no problem. One of the men who worked at the hotel came down and lit a fire. I did really love this cabin.

I can only envision how that Plant Hopper floated down. Sounds like such a good bug.