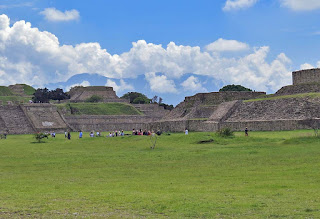 One of the nice things about archeological sites in Mexico is birds are often found there. This doubles the motivation to go, particularly with Martin, who is always very focused on the birds. There is a fabulous pre-Columbian site near Oaxaca named Monte Alban.  It is one of the earliest known cities in Mesoamerica, a political and economic center for the Zapotecs for almost a thousand year. It was founded in about 500 BCE, and lost its prominence in about 500 CE and was mostly abandoned by 700 CE. The site is located at the top of a low mountain ridge, overlooking the Oaxacan Valley.

We left the hotel after a quick breakfast and coffee. Monte Alban is located about six miles from the city. As we drove up the hill to the site, we passed numerous walkers, joggers and cyclists. It was pretty impressive, considering it was a week day. We stopped before we reached the gate to walk a trail below the ruins. We could hear one of our main target birds, Ocellated Thrasher. Unfortunately, we never saw the bird. We did see some Cinnamon-rumped Seedeaters, which are classified as White-collared Seedeaters. (I am not sure I agree with that!) There was a Greenish Elaenia, a Pileated Flycatcher and several Cassin's Kingbirds. Martin got a quick look at another target, Slaty Vireo, but several people didn't see it at all.

It was time for the ruins to open, so we trudged up the hill to the entrance. I gained even more respect for the walkers and joggers! Eddie had parked at the top, but came down and gave us a ride for the last part of the walk. The lot was filled with vans and buses. People were starting to crowd the entrance. Vendors selling beads, hats and other souvenirs were scattered around the parking lot. Unlike at Chichen Itza they were not obnoxious at all. There was no constant "ALMOST FREE!" We walked up the steps and got our tickets for the ruins. 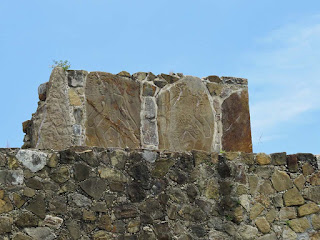 The structures were very impressive and in quite good condition. We walked around the perimeter, which was somewhat wooded. We quickly found a Boucard's Wren sitting up singing. As we circled around, we got great looks at a Slaty Vireo, one of the oddest looking birds of the family. Unfortunately, I didn't get any photos. We had several Blue Mockingbirds, Dusky Hummingbirds and Rufous-capped Warblers. We walked out into the center of the complex and heard a Canyon Wren singing. We also had a Rock Wren. We took some time to study the carvings on the pyramids and slabs of stone. I was really impressed. Before we left we did a quick walk through of the museum at the entrance, which was very interesting.

We returned to the hotel and went out for a lunch of some nice mole. We got in the van mid afternoon and drove towards the area we had been the day before. We had been discussing some bird possibilities and Beautiful Hummingbird came up. It is a tough species to find. It would take some luck. As we were driving down the highway, Martin spotted a mescal factory/restaurant with a lot of blooming agaves around it. We stopped for five minutes and found Dusky and Berylline Hummingbirds. We decided to stop again on the way back.

We stopped at Yagul Road and birded there for a bit. We had a couple of Gray-breasted Woodpeckers, a Curve-billed Thrasher, a Black-vented Oriole and a few other species. We moved on to another spot, known for having an Ocellated Thrasher territory. It was quite windy when we arrived. A nearby thunderstorm was causing some down draft. Almost immediately Michael heard a thrasher singing. We searched the tops of the bushes, as they sometimes sit on top when they sing. We had no luck at all. Martin excused himself and went around the corner for some privacy. He heard the thrasher nearby and it suddenly popped into view, very close by. Martin came out to the road we were on and motioned for us to come. We had some very poor glimpses of the bird deep in the brush, but not satisfying at all.  The weather wasn't looking very promising and it was getting late, so we headed back.

We did stop at the mescal factory/restaurant again. The agaves were packed with bees and several Dusky and Berylinne's Hummingbirds were feeding greedily. Suddenly Michael called out "BEAUTIFUL HUMMINGBIRD!" This is a small hummingbird. It was sneaking in grabbing a sip or two of nectar before being run off by the other larger hummingbirds. We were really excited! My photos are awful, but I was still happy with them.  A few swifts flew over head. A White-tailed Hawk perched near by. We left and drove back to the city. 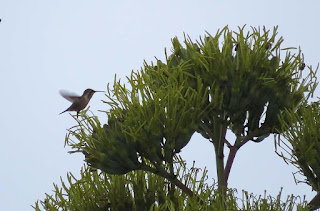 I know this is a bird blog, but I did want to add something about the dinner we had on this night. Michael took us to a lovely spot that specialized in moles. It was an amazing dining experience. Our waiter brought out tortillas and two plates with seven small bowls full of different moles. He explained what each one was in great detail. We all tasted each one, actually, I tasted them all several times! He then took our orders. I chose estofado with lengua (tongue), and it was beyond belief. The mole had a slight licorice flavor from one of the herbs. The lengua was cooked to perfection. The food in Oaxaca is some of the best I have ever eaten!