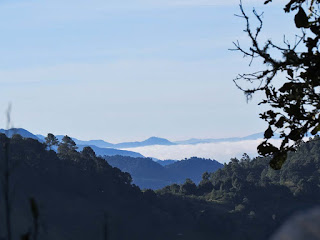 This was to be our last day to go birding. It was also Martin's most anticipated day. We were going up to La Cumbre, a beautiful area in the cloud forest about 24 kilometers from Oaxaca City. This site is where Dwarf Jays can be found, which Martin wanted in the worst way. Michael said he had never seen the jays before 9:00 AM, so there was no rush, but we did arrive quite a bit earlier than that. The valley below was shrouded in clouds.

We immediately found birds. Mexican Chickadees were a new species for the trip. Olive Warblers were feeding high in the trees. Red Warblers were fairly common, a bird I wish we got in Texas!  Band-tailed Pigeons flew by. We worked our way up hill along the road, stopping from time to time. Dwarf Jays associate with Gray-barred Wrens. They feed in small flocks together. Usually the calls of the wrens are what key you into the jays being around. That is exactly what happened. Michael heard the wrens, then quickly found the jays. They moved around mid-level in the trees and we all got good looks, though photos were impossible for me. Martin did get some shots. http://www.martinreid.com/Misc%20website/MX2015DwarfJay.html

I glanced down the hill below us and saw something moving on the trunk of a tree. I initially thought it was a huge lizard, but then as it came up into clear view I could see it was a woodcreeper, with a very large bill. Michael got on it and called out "Strong-billed Woodcreeper!"  This species has a huge range, but is difficult to find in Mexico. It flew up and across the road, calling. We then heard a second bird calling nearby. We all got great looks. I was pretty excited to have found a good bird. 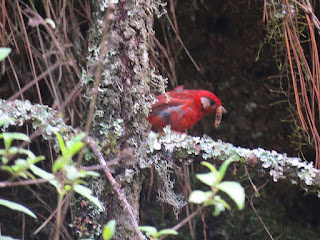 We also found a number of butterflies and beautiful flowers, including a couple of orchids. A Red Warbler with a large worm, flew in very close to us. It seemed kind of nervous and kept moving around, but not far, and kept the worm in its beak. We all moved away, as we assumed it had a nest nearby. Michael actually saw it go into the nest from a distance. Russet and Ruddy-capped Nightingale Thrushes were singing around us. We heard Collared Towhees, but never saw them. It was a very successful morning!

There was a place Michael wanted to take us to for lunch to Tlamanalli in Teotitlan de Valle. I am really glad we did go there! The restaurant was lovely. Our server, Rosaria, was a delight. She dressed in traditional clothing, with her hair done up in purple ribbons. She brought us each a shot of mescal to start the meal. I had never drank mescal and was surprised just how much I liked it. We asked how much a bottle was, but it was a little more than I wanted to pay. There was a spinning wheel and huge loom in the corner. There were woven items for sale. Teotitlan de Valle is known for its weavings.

After lunch we returned to the spot where we had glimpsed Ocellated Thrasher the day before. This day we were a lot luckier. We actually saw the thrasher perched up and singing! We didn't see much else and decided to head back into town. We stopped briefly at the Beautiful Hummingbird spot from the day before, but had no luck. We had more fabulous mole for dinner and headed back to the hotel to prepare for the trip home. It was an amazing time. We had way more birds than we expected, many thanks to Michael Retter. The company was great. I am totally in love with Chiapas and Oaxaca. If you have any interest in this area let me know. I will be happy to give you more information. I would highly recommend it!