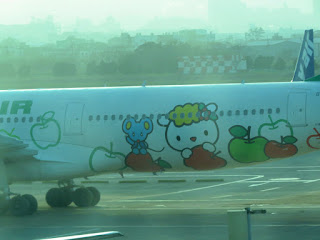 I think every birder has a mental list of the birds they most want to see. Spoon-billed Sandpiper at the very top of my list. Unfortunately, this very endangered species has only been seen in North America five times, four in Alaska, and one time in Canada. I had pretty much resigned myself to only wishing. Then my friend, Ryan Shaw told me he was going to Thailand, where they winter in small numbers. He had gotten a really good deal on Korean Air from Houston. This got me to thinking. Martin is very focused on birding Central and South America, and had already seen Spoon-billed Sandpipers in Hong Kong before he moved to Texas, so I approached some other friends, thinking of going in mid March. I started looking for a guide, but had no luck, as that is a popular time of the year to go. I thought it wasn't going to happen.

Then Martin started getting the bug to go. He has a friend who he did a few birding trips with in the past, Dave Sergeant, who now lives in Thailand and does some guiding. He contacted Dave and found that he was available for some dates that would work for us. I checked air fares and found we could do it on Air China through Beijing for about $850! Our friend Willie Sekula decided to go with us. I booked the flights and we started making plans. Then what I though was disaster struck. A month after booking I found out Air China had discontinued the outbound flight. They had re-booked us for the following day to Beijing, but the flight from Beijing to Bangkok was sold out. Even if it hadn't been, we didn't want to lose a day. I started searching for new flights and found EVA Air, a Taiwanese airline had a comparable fare. I was able to cancel the China Air flights and get a refund. EVA has a very high rating, so we were pleased.

We left Houston on February 19 just before midnight. I was really amused to see we were flying on EVA's Hello Kitty 777! We arrived in Taiwan early on the morning of February 21, after a 16 hour flight. (The International Date Line caused us to lose a day.) We managed a very short eBird list for the airport, so we can sort of claim to have been in Taiwan. We then had a three hour flight to Bangkok, arriving just before noon.  I got my first life bird, Open-bill Stork in a water filled ditch by the runway. Dave met us after we went through customs and we took off for Laem Phak Bia to do some shore birding.

We dropped off our things at a nice little hotel in Petchaburi.  We made a quick stop for lunch, where Martin's chicken soup turned out to be chicken foot soup. The broth was good, the feet not so much. Our first target was Asian Dowitcher, which we found pretty quickly in a salt pan with a good number of other shorebirds.  We had 19 species of shorebirds, including Lesser Sand-plover, Little Ringed-Plover, Kentish Plover, Spotted Red-shank, Marsh Sandpiper, Wood Sandpiper, Temminck's Stint, Long-toed Stint and Red-necked Stint. There were a couple of Painted Storks, which has a beautiful pink blush on its back end. The weather was hot, but there was a breeze of off the Gulf of Thailand, which is nearby. 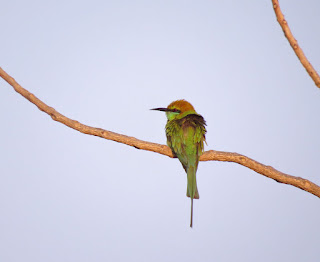 We left the salt pans and headed to the picturesque garbage dump. Dumps often have great birds and this one was no exception. Green Bee-eater was as beautiful as the dump was ugly. Two Eurasian Hoopoes were there, another of my most wanted birds. Unfortunately, they flew before I could get a photo. I was "chuffed", as Martin would say, to see a Wryneck, an odd species of woodpecker, which was yet another of my most wanted. The sun was going down and we were feeling jet lagged, so we wrapped it up for the day, after an excellent meal at a local small restaurant. No weird chicken body parts were served, so we were very happy! By the way, Thai beer is really good! We returned to the hotel, where the beds were hard, as they were everywhere in Thailand. We were so thrilled at our first day of birding, we really didn't care! I fell asleep thinking of the Spoon-billed Sandpipers we hoped to see in the morning.