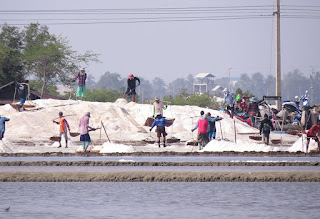 There is always a sense of relief when you get the target bird. We were going to have a couple of chances to see the Spoon-billed Sandpiper, but earlier is better! We left the hotel at dawn, stopping at Seven-Eleven for the first of many breakfasts. (If you go to Thailand, get the toasted ham and cheese sandwich, it was great!) After scarfing down our sandwiches we headed for the salt pans of Pak Thale. Salt pans are shallow ponds, filled with sea water, which evaporates down to salt. They are incredibly good for shorebirds. The pans at Pak Thale had at least one Spoonbilled Sandpiper all winter. 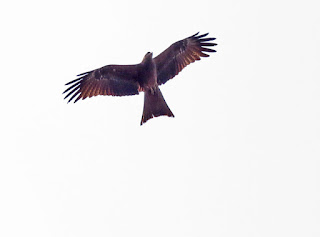 The number of shorebirds was overwhelming. We had 24 species at Pak Thale. It didn't take long to find the Spoon-billed Sandpiper. Unfortunately, it was too far out to get a photo, but I was happy. Other species we saw included both Greater and Lesser Sandplovers, Spotted Redshanks, Common Greenshanks, Great Knots, Black-tailed and Bar-tailed Godwits, a huge flock of Eurasian Curlews, and Broad-billed Sandpipers. There were more Painted Storks, many egrets and herons and two species of cormorants. We had one more rarity, Nordmann's Greenshank, so we returned to Laem Phak Bia, where we found one pretty quickly.

We tore ourselves away and went looking nearby for raptors and wading birds. Yearly burning was going on, causing some uncomfortable breathing, but it seemed to bring out the hawks, kites and eagles. Some of the fields were flooded and were full of egrets and storks. One spot had both Pheasant-tailed and Bronze-winged Jacanas. Black-eared and Brahminy Kites were common. A couple of Black-shouldered Kites, which are very similar to our White-tailed Kites, hovered over head. We had four Greater Spotted Eagle, a Booted Eagle, and best of all, a White-bellied Sea-Eagle. We added the first of many woodpeckers to our list, one with a great name- Freckle-bellied Woodpecker. A flock of Scaly-breasted Munias was in a weedy field. This species was recently added to the ABA list for North America, the population coming from escaped cage birds. It was great to see true wild ones!

We then set out for Kaeng Krachan National Park. This park is a fabulous spot for birds, butterflies and mammals. Both northern and southern species reside here. It has several species of monkeys, Sun Bears and wild Indian Elephants. We arrives late in the afternoon at the Ban Maka Resort and did a little bit of birding, right around the hotel. We had a great meal and made plans for the next day.