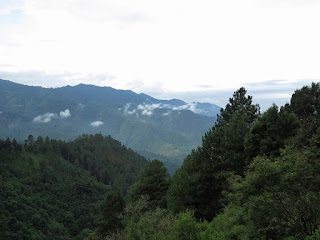 Martin got up early and joined the others for a trip back to the Green Gate Rd. to try for a few birds that they missed. Our plan was to check out at about 11:00AM and make the drive to the city of Oaxaca. Because of the incident the night before, I decided to stay at the cabin and get a bit more rest. I got up maybe an hour after they left and went to sit on the porch of the cabin. Watching the clouds pass through the valley below me, sometimes hiding the mountains, sometimes completely dissipating, was wonderful. There was a scrubby field right below the cabin and I watched birds hop in and out of view. A Rufous-capped Brushfinch was new for the trip, as was a Buff-breasted Flycatcher. The Spotted Towhees were chasing each other all around. Stellar's Jays were working their way through the near by pines. This was not bad!

I was actually a bit hungry, so I slowly worked my up the hill to the office, where there was a continental breakfast. I was in no rush, so I took time to check out all of the birds. I was particularly pleased with a Black-headed Siskin and a White-throated Towhee, though the towhee was less than flashy. White-eared Hummingbirds were very common. I had a bit of fruit and sweet bread, along with some coffee, while I checked my iPad. There was a fire, which was very pleasant. I didn't see any hummingbirds coming to the feeders on the porch. I left pretty quickly after I ate and continued to bird. I was surprised at how well I did walking up and down the rather steep trail from the office to the cabin. I ended up doing the round trip at least four times. I was obviously recovering.

Martin and the group returned. I have to admit I was a bit crestfallen to hear they had a Bumblebee Hummingbird, which I badly wanted. A Hooded Yellowthroat started singing, which helped make up for it. I even got a poor photo. We had several other birds around the office, White-throated Flycatcher, a couple of brown-throated House Wrens, and a gorgeous Amethyst-throated Hummingbird. I glimpsed a tiny brownish hummingbird zip by, which may have been a Bumblebee, but it wasn't enough to count it.

We got in the van and started for the city. We went at a pretty good clip until about 1:30PM, when we all decided we needed lunch. We spotted a sign on the main road for a restaurant which was back on a gravel road. We decided to give it a try and were very happy we did! It was a bit late for lunch, so Michael went in to see if they were still serving. The staff was cleaning the dining room, but they said we could sit outside under the umbrellas. We went into the garden, where we were greeted by a rather scruffy West Mexican Chachalaca, who looked like he made his living begging. We could see a small lake next to the restaurant and scanned for water birds. We couldn't see a lot, because of the trees, but did pick up American Coot and Least Grebe.  A Boucard's Wren, which is in the same family as our Cactus Wren sang from a nearby snag.

Our food arrived and it was great!  I had a shrimp soup that was perfection. The staff was very attentive and seemed thrilled to have us there. They brought out their guest book and took numerous photos of us. I have a feeling they don't see many gringos. After we finished, we walked down a small dirt road, where we could see the lake a bit better. Peggy spotted a small plover, which we got in the scope. We were really surprised to see it was a Snowy Plover, not at all expected in that area. It started to rain, so we decided to make our way to the city. 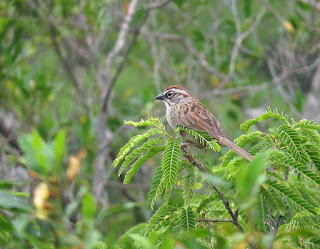 When we arrived in Oaxaca in the late afternoon we decided to make good use of the light and continue birding, before going to the hotel. We drove out out of town to Teotitlian del Valle. This was a xeric area, with several specialty birds. I added Cassin's Kingbird to my Mexico list, along with Pileated Flycatcher, which has a fancier name than appearance. We were very pleased to see a singing Bridled Sparrow, sitting up, allowing good photos. Michael spotted a Oaxaca Sparrow flitting around low in the bushes. He said that it was as good a look as we could expect. Then the bird sat up on a stick and showed off beautifully!

It was getting a bit late, so we went back into town to our hotel, Casa Arnal. It was in a lovely older area of Oaxaca with cobbled streets. There was a church across the street that was built in about 1700.  Gary realized when we got inside that he had actually stayed there several years earlier. Our room didn't have air conditioning, but with the open window and fan it was very comfortable. We went out to eat and had our first excellent meal in the city, gourmet pizza, believe it or not! I was really excited to experience this wonderful city.