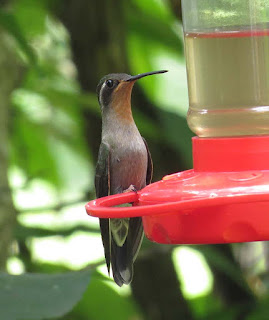 This day I was scheduled to go to San Cristobal de las Casas, a beautiful town about an hour from Tuxtla. We started out an hour later later than the day before, so I was more rested.This trip promised one of my most wanted birds, Pink-headed Warbler. When I got on the van I discovered an old Facebook friend, so that made the trip even better.  All in all things looked great.

We drove through the city to the spot for the warbler. The property was originally owned by a wealthy man who did not live in the area. Somehow it went from private property to being owned by the Zapotec community. (There is some very interesting political history in this area with the Zapotecs.) One of our guides for the day, Alberto is from San Cristobal and has built relationships in this community, encouraging the use of this land for birding instead of logging or making charcoal. He always requests permission and for a couple of local people to act as guides. We waited for the two men to arrive and scanned the nearby trees. We quickly found Hutton's Vireos and a couple of Steller's Jays, which are a bit different than the Steller's found in the states.

One of the men arrived and said the other would join us shortly, so we started into the woods. The day before the Pink-headed Warblers had been seen very near where we were parked, but there was no sign that morning. We headed to an area known as a territory for Garnet-throated Hummingbird, also one of my big targets for the day. We quickly located a male sitting on a branch, guarding his home turf. It is a big spectacularly colored hummingbird, but unfortunately, the light wasn't good, so I didn't get a photo. We walked through the woods, listening for Scaled Ant-pitta, with no luck.

We then went to a power line cut, which can be good for the warbler. Sure enough, a small mixed flock was on the edge of the woods, including four Pink-headed Warblers. Just as we saw the first one well, I heard a sound behind us of someone being very sick. I felt a deep sympathy for the victim. It is so easy to get "tourista" in Mexico. I was very glad it wasn't me. I really admired him, though, as he rejoined the group and was very upbeat and not asking for any sympathy. We teased him a bit that it was all too much excitement. We moved on to another area of the woods and another participant grabbed the toilet paper and ran into the woods. This was not boding well.

We got back to the van and we headed up to a high elevation point, where Guatemalan Pygmy-owl had been seen by another group. We drove a steep road up to about 9,000 ft. It was misty and pretty chilly. On the way up we spotted a beautiful Unicolored Jay sitting on a fence. It was a much better look than I had the day before. When we parked some Common Chlorospingus were working the bushes. There was no sign of the pygmy-owl, despite Alberto's whistling. Our other guide, Michael Hilchey, of BRANT tours, spotted a number of birds in the low trees along the road. We were high enough up that the trees were stunted, almost like elfin forest. We heard a Highland Guan calling across the field, but had no visual on the bird.

We added more high altitude birds like Cinnamon Flower-piercer, Rufous-collared Robin, Yellow-eyed Junco and a subspecies of Northern Flicker, that may be split in the future. Walking down the road we found several Black-throated Jays. Again, the looks I got were much better than the day before. Unfortunately, I heard the sounds of sickness again. The mood was still very good, though. We got in the van and started out for our lunch spot where there was the promise of a hummingbird feeder and a bathroom!

We arrived at a small reserve on the road to Ocasingo. Sure enough, there was a picnic table with a hummingbird feeder right next to it! There was a lovely little farm on the other side of the fence with some black sheep, whose wool I coveted for knitting a sweater. We ate our lunch watching Amethyst-throated and Magnificent Hummingbirds battling it out over the feeder. After finishing Alberto suggested a hike up one of the trails to try for Blue-throated Motmot. A couple of people who had been fine earlier in the day decided to stay back and rest. I was feeling fine, so I started up.

The trail was a little bit steep, but not bad. We had a group of Band-backed Wrens clattering away at us. There were Slate-throated Redstarts, Golden-browed Warblers, Crescent-chested Warblers and Rufous-collared Robins passing through. We got to the top and had to climb over a fallen tree. I was a little tired and I knew I would be slow going down hill, so I started back. There were several people napping on the picnic table and the hummingbirds were still battling. The rest of the group got down right after I did. We started gathering things together to leave, when Alberto spotted a Gray Silky-flycatcher in a tree by the road. It flew across the road to a field and perched up nicely. We also spotted a Tropical Mockingbird in the same area.

LOL! Yes. DANGER! How terrible was that day?!?! Sickness took a great many of us. The poor man was on our tour and I thought he had died. Thankfully, he did not. We were on the day prior and it was MUDDY! and slippery. Pretty area though....but like you......hardly any pics:(