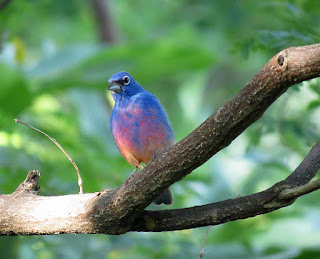 The next posts will deal with the second part of our trip to Oaxaca which Michael Retter put together for us.  Besides Martin and me, there were Geoff and Christine from Chicago, Jennifer and Peggy from Half Moon Bay, Gary from San Francisco and Michael, who lives in Fort Worth. We also had a fabulous driver, Eddie, who did an amazing job. I only knew Michael and Jennifer and Peggy, so I had a little nervousness about being in such close quarters with people I didn't know, but we all got along beautifully. 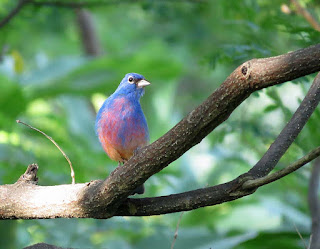 We left early in the morning and I was still very much under the weather. Everyone graciously yielded the back seat to me so I could sleep between birding intervals.  Michael decided to take a detour so we could pick up some new birds. We arrived at our first stop around dawn. This was the spot of one of my most wanted birds, Rosita's Bunting. (Aka Rose-bellied Bunting, but I like Rosita's better.) This is a stunning bird, as you can see from the photo, which makes our Painted Bunting look cheap and tawdry. I was thrilled when a male popped up and sat in full view. I felt a bit weak, not sure if it was swooning from the bird or the stomach bug, so i returned to the van. 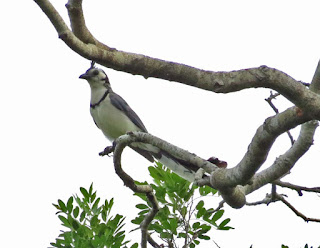 We moved further down the highway, but when the van stopped, I stayed inside. Martin quickly came and got me, as they had found a Sumichrast Sparrow. I jumped out, saw the bird. There was also a White-throated Magpie Jay. Again, I got back in the van pretty quickly. When everyone came back, Gary asked me if I was taking Cipro. I said I was not, and he strongly suggested I get some. He gave me one of his and we decided to stop at a pharmacy as soon as possible to get more. This was excellent advice. My most distressing symptom quit pretty quickly after starting. Martin had to visit two pharmacies before he was able to get more, and I was more than grateful!


Our next birding stop was for another very wanted species, Giant Wren. Matt Hale, Michael's partner, who was not able to come, had jazzed me up to see it. It is one of his favorite birds. I could see why! It's a huge wren! It makes a crazy whack-a-whack-a-whack-a call! It was absolutely fabulous! Unfortunately, I didn't get any photos. Videos would have been even better. There were also two Bare-throated Tiger-herons. I picked up Ruddy-breasted Seedeater, but it is hard to get excited over most seedeaters. I do have to say, this one is more attractive than some. There were some other egrets and herons and some Northern Jacanas. We drove a couple of back roads looking for a spot where Matt had found Lesser Ground-Cuckoo during the GBNA meeting. We came across a couple of Lesser Yellow-headed Vultures, a bird we expect to find in Texas some day. We finally found the spot, but the ground-cuckoo didn't show. We could hear him, but he was playing hard to get. As we were driving back to the main road we saw a Limpkin, always a nice find.

We finally crossed the border to the state of Oaxaca. We had a long drive ahead to our destination, the town of Huatulco which is on the coast. We made a productive stop at a pond along the road, picking up Snail Kite, Black-bellied Whistling Duck, Common Gallinule and Green Heron. I was already feeling better in my gut, though I still felt absolutely exhausted. We arrived in Huatulco and checked into our wonderful hotel Mision del Arcos. The staff was wonderful. There were Gray-breasted Martins on the power lines, the air conditioning was ice cold and the room was lovely. Everyone decided to eat in the hotel restaurant, but I still had no appetite, so I stayed in. Despite this, I was definitely on the mend.

I only took three photos this day and I have added them here.