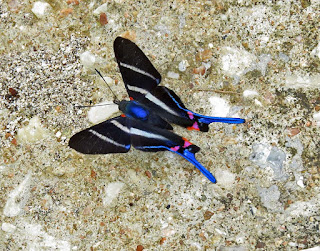 I rarely feel the need to explain why we are on a particular trip, but the circumstances of this one are rather unusual. The Gay Birders of North America, aka GBNA, was founded several years ago to provide a welcoming environment for LGBT birders and straight allies. Martin and I led field trips in Beaumont TX during their biennial meeting several years ago. We have been vocal supporters of LGBT rights for years and are friends with many of the members. We skipped their last meeting at Half Moon Bay, but when we found out this year's event was in Chiapas Mexico, we started looking at participating. Our dear friend, Michael Retter, invited us to join a few friends of his after the meeting to bird in Oaxaca. That was the clincher! Unfortunately, I could not get the time off to do the full GBNA meeting and the Oaxaca trip. We were allowed to do part of the meeting, missing the first two days. 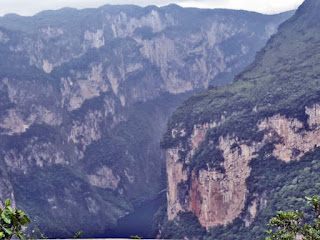 We arrived late morning on July 11 at Tuxtla Gutierrez. Our first birding destination was Sumidero Canyon, which is quite near the city and breathtakingly beautiful. We hired a cab, dropped our bags at the hotel and headed to the canyon. Michael R. was leading a trip there and we hoped to find the group, to bird for part of the day. We stopped at the entry gate of the park and were stunned by the huge numbers of butterflies in the parking, mostly Crimson Patches, Guatemalan Patches and Simple Patches. I also found a Black-patched Cracker, a gorgeous blue bug. Just past the entrance we had Yellow-green Vireos singing and a Plain-capped Starthroat.

We drove up the canyon and spotted a large van parked at a trail head to a mirador, (overlook). There was a small store, so we stopped and asked if the van belonged to birders. The answer was yes, so we told the cab driver to wait and headed down the trail. We ran into Michael and the group walking back. They had seen some amazing birds, including one of Martin's most wanted birds, Blue Seedeater. They also had Belted and Flammulated Flycatchers, targets for the canyon. Michael pointed out where they had the birds and we told them we would catch up after we birded.

Unfortunately, the seedeater did not cooperate. It had been singing on a branch over the trail for fifteen minutes earlier, but it had shut up by the time we arrived. We looked for the Belted Flycatcher and missed that, too. Fortunately, we did see the Flammulated Flycatcher, my first life bird of the trip. It was lunch time and getting very quiet. We did manage to see a pair of Yellow-throated Euphonias building a nest, along with a Squirrel Cuckoo, Collared Trogon, Lesser Greenlet and Olivaceous Woodcreeper. We could hear a Barred Antshrike in the distance, one of my favorite sounds in the tropics.

We got back to the cab and headed up higher, where we found the group eating lunch. We bid our driver goodbye and ate some banana leaf wrapped tamales. We wandered around the picnic area, which had an amazing view of the canyon. It was very quiet bird wise, but we were surprised to have a flock of Brown Pelicans flying down the canyon over the river. We were a long way from the sea, over fifty miles. Michael said that he usually sees them on the river. The butterflies were still thick.

We headed back down towards town, stopping to walk a trail, where Bar-winged Orioles are seen. Unfortunately, they weren't seen by us. We did see Varied Buntings and  Fan-tailed Warbler, along with a few other birds. The prize of the day was out on the road when we returned to the van. One of the group noticed an odd butterfly and pointed it out to Michael, who shouted "RHETUS!" It was a Sword-tailed Beautymark, Rhetus arcius, a spectacular bug. We ran up and I probably took 100 pictures. I felt very badly for Matt Hale, Michael's partner, as he had told me how badly he wanted to see this butterfly and he was leading a different field trip.

We drove back to the hotel for dinner, where we reconnected with some old acquaintances from Beaumont. We discussed with Michael and Laurie Foss, who was one of the organizers, which field trips we could squeeze in on. Martin and I decided to go on different trips, since we had different goal birds. My trip in the morning was leaving at 415AM, so we made it an early night.