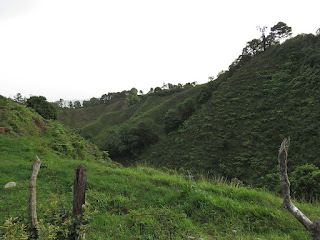 I am usually pretty game to get up early to go birding, but getting out of bed at 3:45 AM was stretching it. The van was leaving at 4:15AM to go to Tapalapa, a high altitude spot about 70 miles from Tuxtla Guttierrez. This 70 mile drive takes about three hours due to numerous speed bumps, pot holes and bad road conditions. Our group piled in and took off. In my mind I could hear Betty Davis saying "Fasten your seat belts, it's going to be a bumpy night", well, actually early morning.

We arrived at our first birding spot at dawn. We had gained a lot of altitude and I was really happy to have a jacket with me. We had a great guide, Eric Antonio Martinez, who is from the Oaxaca area. He has a great ear and eye, and seemed truly happy to be guiding us. He immediately started calling out the birds which were singing nearby. If I recall correctly, a Mountain Trogon was the first bird we actually saw. We could hear White-faced Quail Doves and a couple of species of nightingale-thrushes. Black Thrushes showed well.

Just a few minutes after we got off the van, Eric spotted a very special bird, a Mountain Elaenia. Just a few days previously, Rich Hoyer, one of the top bird guides in the United States, discovered elaenias at this location. It was the first record for Mexico! The bird normally is found in Guatemala and points south. He found not just one, but several. We ended up seeing seven! This area is not birded often, so there is no telling how long this population had been present. It was very exciting to get a bird that isn't even on my listing software for Mexico. I was able to take one of my worst photos ever of one of them.

It started warming up and butterflies began flying. Most were Mexican Silverspots but I was thrilled to find a Guatemala Hairstreak. A few Black-capped Swallows flew over head, a new bird for me. Eric spotted a tiny Wine-throated Hummingbird feeding, which was not on my list of expected birds. Then a large green bird flew over, quickly followed by another which sported a very long train fluttering behind it, Resplendent Quetzals! I briefly saw the male perching, but was unable to get anyone else on it before it flew. Even though the looks were fleeting, we all were really excited. None of the other groups, nor the scouting party had been able to find them. We hung around that area for quite a while and never saw them again.

We moved further down the road, where we had a large flock of the Black-capped Swallows perched on utility wires. Brown-backed Solitaires were singing their "waterfall of broken glass" song. Eric heard a Blue-throated Motmot, one of the target birds. Unfortunately, it was on the other side of a small patch of woods and never came in. I would have loved to have seen it, but I count heard birds, so that took the sting away a little bit. Common Chlorospingus, formally known as Common Bush Tanagers. The name is much more impressive than the bird. We also spotted a pair of Blue-crowned Chlorophonia fly over head. Their flashiness more than matches their name.

We moved down slope to a new location with a trail through the forest. Eric found another Wine-throated Hummingbird and a Green-throated Mountain Gem, another new hummingbird for me. We then heard Azure-hooded Jays calling. Again, it ended up being a heard only bird for me, but we did see two other species of jays, Black-throated and Unicolored. We had looked for Unicolored in Honduras in November, but had no luck. I felt badly that Martin wasn't with us, as he really wanted this species. I photographed a few more butterflies, Mexican Dart-white, Teal Beamer and Anna's Eighty-eight among them.

The ride back was just as bumpy, though we could at least see where we were. There is a huge reservoir that I only had a vague sense of in the dark. It was very impressive by the light of day. We drove over the dam and we could see some egrets below in the river, but stopping is absolutely forbidden. We arrived back at the hotel to flocks of Green Parakeets screeching over head. It was a very long day, but very productive.

Way to go to get those Mountain Elaenias!