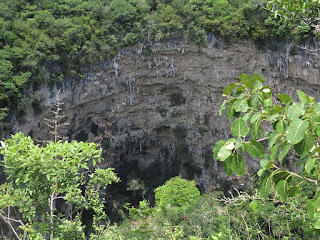 Ok, I am being a bit dramatic with the blog title, but it was, physically, a pretty miserable day. This post will be pretty short, as between my sprints into the woods and my slight fever, I don't remember a lot of the birding, and believe me, you don't want to know about how I felt!

I actually got to sleep in, as our van didn't leave until 615AM. Martin had an earlier start, so I was lolling around the room, when I was hit by sudden stomach cramps. As I said, I won't share the details. I wasn't nauseated, so I thought maybe it was a fluke. I felt pretty well so I decided to go on the trip. I was delighted to see Eric was our guide again. I really liked him. The drive to our first stop was fairly short, but we did take a rest room break. It did not go well, but I was still not feeling sick.

We arrived at our first stop, a road that was easy walking. Eric very quickly found our first target, a Long-tailed Sabrewing, a type of hummingbird. A new hummingbird is always a great prize! We moved farther along the road and found a number of birds, including one of my favorites, a Royal Flycatcher. This bird has the craziest crest ever, but it is never raised. It is multi-colored and spreads sideways, like a Napoleonic hat. Eric got it in the scope and said that the crest was puffed up! Unfortunately, by the time it was my turn at the scope, the bird had flown. That is one of the disadvantages of birding in a group. Everybody can't be first, and that is fine.

We moved on a bit and and Eric found another of our target birds, Nava's Wren. He got the bird in the scope briefly and I was very happy! We picked up several other birds on the road, Tawny-winged Woodcreeper, Yellow-winged Tanager, Red-legged Honeycreeper, and White-winged Tanager, among other birds. I wasn't the only one disappearing for brief times into the woods. I started to feel very tired and kind of feverish at this point. We got back on the van to go to the next stop and I snoozed a bit.

We ate lunch at a spectacular sink hole where dozens, if not hundreds of Green Parakeets roost. The hole is ancient and has some pictographs on the walls. It is massive and quite deep. it is dry at the bottom and has large trees. The noise from the parakeets circling up, calling, when they flew out was really impressive. A pair of Bat Falcons sat near the rim; I witnessed one taking a swipe at one of the parakeets. It looked like they were making a good living. Eric called us out to the parking lot, where he had a black-faced form of Bobwhite calling. It was quite hot and my fever wasn't helping, so I decided not to walk around the rim of the sink hole with some of the other group members. I really wish I had felt better, as it was a very impressive spot.

This was our final trip with the GBNA group. The following day we were breaking off into a smaller private group to head to Oaxaca. Despite my physical condition, which seemed to be worsening, I was really excited. We bid goodbye to our new friends and the ones we had made at the meeting in Beaumont. We had a fairly early start and I was hoping going to bed early would take care of my problems.