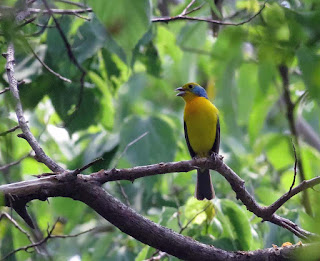 We had been going at a pretty good pace since we arrived, though I was slower than normal. This day was going to be a bit more relaxed. Michael had to make some arrangements for upcoming days, so he needed some time off. By the way, he did an amazing job with the logistics! Martin and I were very impressed. Our plan was to bird in the morning, take a long break in the afternoon and then do more birding later in the day.

There was a 24 hour cafe across the street from our hotel. I still had very little appetite, so I just had coffee and toast. I devoutly wished I could take this no appetite problem home with me! We met Eddie and left for Laguna Zacates, a park on the outskirts of town. We walked the road and quickly started picking up birds. A pygmy-owl started calling and Michael counted the notes; less than 13 meant it was a Colima, not a Ferruginous. We located the bird and confirmed the ID. Lilac-crowned Parrots flew over. I finally got a look at a Red-breasted Chat, a bird I had really wanted, but missed on our previous attempts. It as a young male with a more diluted color on the breast, but I found it lovely! There was a Northern Cardinal, which you wouldn't think I would be excited about, but this was a different subspecies, Long-crested Northern Cardinal, which is likely to be split. He had a very impressive crest! 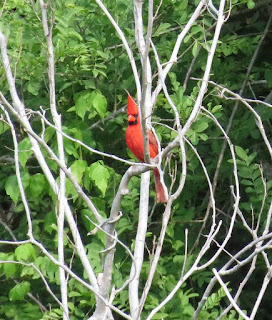 We went to a side road where I finally saw Orange-breasted Buntings. I had missed them the day before, due to being crashed out on the van. They were worth the wait! Rosita's was still my favorite, but these were a close second. We also had good looks at the west Mexican form of Blue Bunting. The males look like the ones that wander into Texas from time to time, but the females are very different, not the same warm brown. This is another potential split in the future. There were a few butterflies along the road, including an unfortunate Rayed Pixie, which had seen better days, and a slightly battered Silver-studded Leafwing. We headed back into town for lunch.

I was actually hungry when we got to the restaurant across the square from the hotel. I ordered a beef tyluda, which is similar to a quesadilla. Michael and Gary decided to share a mixed plate of local specialties, including chapalines, fried grasshoppers. I tried a few and really liked them. They have a great crunch and the seasoning was very nice. Michael warned me that it can be a bit disconcerting to see a leg sticking out between your teeth later. I didn't come close to finishing, but the food tasted great. We went back to the hotel where they have the most delicious air conditioning.

We left later in the afternoon to go to two roads with water towers on the outskirts of town. We had several Broad-billed Hummingbirds of the Doubleday's subspecies, a possible split. There were Citreoline Trogons, Russett-crowned Motmots, Lilac-crowned and White-fronted Parrots, and other birds we had seen before. Then the star of the show appeared, a cooperative Lesser Ground-Cuckoo! He didn't let me get any photos, but he showed himself very well. This bird looks like it has Egyptian eye make up on.  Martin did a photo. Here is a link to his picture. http://www.martinreid.com/Misc%20website/MX2015LesserGCuckoo.html. We stopped to see if we could get into some ruins in a park nearby, but unfortunately, it was already closed. There was talk of going first thing in the morning on the following day.

On the way back into town we made a stop along side the road when someone, probably Michael, spotted some West Mexican Chachalacas in a small tree.  A Russet-crowned Motmot sat in full view on a telephone wire and a White-fronted Parrot was sharing the tree with the chachalacas. We got back to the hotel and Martin and I decided to forgo dinner with the group and eat at the hotel, as we had a pelagic trip planned for the next day and I wanted to be very well rested, if I decided I was well enough to go.