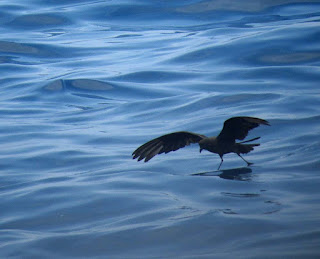 We got up and I had to make an important decision. Today Michael had a pelagic trip scheduled. I have gotten very sea sick in the past. I wanted to die when we did the pelagic trip in Peru. I hung off of the back of the boat less than a mile from shore when we went for the Brown Noddy off of South Padre Island. Here I was, still feeling weak from the horrible case of tourista that I had been suffering through, and I was thinking of going to sea. On the positive side, I did have  fresh prescription for scopolamine patches and this was a much shorter trip than pelagics normally are, six hours as opposed to 12 or more. On the negative side, if I did get violently sick, it would drain me even further. The rest of the group was going out for some early birding, since we weren't going out until late morning. I decided to stay at the hotel and rest. I would decide at the last minute.

Martin stayed with me, and we stayed in bed until about 8:00 AM, almost unheard of! I did wake up at about 7:00 AM and heard a Ferruginous Pygmy-Owl tooting away. I was unsure if it was an actual owl, or one of the other group members outside imitating one. I asked them when they got back and they said it was definitely a real owl. We went downstairs to the hotel restaurant and I had some amazing cheese stuffed French toast. I was still only able to eat a half a piece, but it was really good! I finally decided I was going to go. With it being a short trip, what was the worst that could happen? We had plenty of water, so dehydration shouldn't be a problem. I put on a patch and decided I would risk it.

The rest of the group returned. We took off for the harbor. We found our boat and it was great! It was small, but very nice. It even had a bathroom. We put on our life jackets because the harbor master demanded it, and we took off. The shore at Hualtuco is really beautiful. If you have seen the movie "Y tu Mama Tambien", it was made about this part of Oaxaca. (WARNING! This is not a family friendly movie!)  The beach here was developed in the 80s by some huge American resorts. Due to flight logistics, it became obvious that this area would not work for North American tourists, so the resorts were sold to Mexican concerns. They are now very popular with the Mexican people. The waters were fairly calm and beautifully blue. 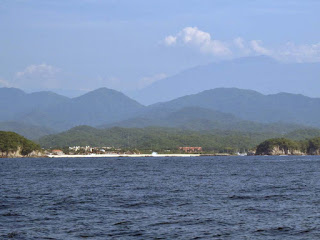 The first bird we had, other than Brown Pelicans, was a Brown Noddy, quite close to shore. It was quickly followed by a Galapagos Shearwater. In Texas you normally have to get way off shore before any pelagic birds are spotted. This was great! The birds came in good number. We had groups of Wedge-rumped, Black and Least Storm-Petrels, at least three species of boobies, including Nazca and Red-footed, both new for me, more Galapagos Shearwaters, and a Wedge-tailed Shearwater. We also saw several Green Sea Turtles and a couple of dolphins, which we were not able to identify. Probably the biggest surprise was three Sabine's Gulls, two of which were in breeding plumage.

We only went out about 15 miles. We saw birds both coming and going. I felt fine! The cooler full of cold water was a big help. I snacked on pretzels. I spilled pretzels, but that was the only mess I made. We were all very happy! We got back to the dock and went back to the hotel. We all cleaned up and then met for dinner. A couple of us had a vague memory of seeing a restaurant that said "wine and tapas bar", so we went searching. After way more walking than we wanted to do, we finally discovered it was actually an Italian restaurant.  The waiter, who might have been the owner, was delightful! I had some excellent ravioli and a glass of wine. I believe it was the most enjoyable pelagic I have ever done!