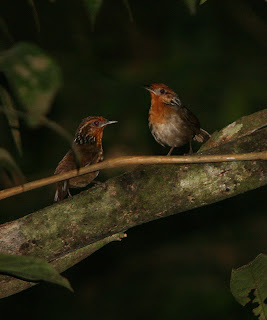 Our goal for the day was to work very hard at finding some of the more difficult target birds, including the Guianan Red Cotinga, Red-and-black Grosbeak, Blue-backed Tanager and Capuchinbird for me. The birding at Brownsberg is physically pretty easy, at least where we were. The trails are relatively flat. The only mud we can across was on the road, and was easily walked around. (Of course during the rainy season it might be another story.) There was one trail, though, where a tree had fallen and hadn't been cleared yet. The forest is fairly open there and we could walk around, but it involved stepping up over some branches and rotting logs. I was having a little difficulty with my knees and hips for some reason, so I wasn't crazy about that trail, but it was where our targets were most often seen, so at least once a day, up and over I went.

The birds were just not active and responsive. Our friend, Willie Sekula, was in Peru at the same time and he said they had a similar experience.  As we walked we finally heard something that grabbed me. It was a sweet but discordant song, absolutely heart breaking in a way. A very well named Musician Wren was singing. These birds can be very difficult to see. They hide deep in the underbrush, rarely showing themselves. Sean played the song back and we were amazingly fortunate. A pair jumped up in the open, allowing us to get some decent photos. It was high fives all around! In case you are curious about this lovely song, here is a link to a Youtube video featuring a Musician Wren singing. http://www.youtube.com/watch?v=I6ITnjSws5I. The bird we heard actually put the bird on Youtube to shame.

Probably the biggest surprise of the morning was a Rufous-and-Green Kingfisher right in the middle of the woods. The only nearby water were the puddles on the road. It was totally incongruous. We then heard a mixed flock nearby. A Cinereous Antshrike called; they are many times the flock leader. We waited as the birds came nearer. Martin spotted a Hepatic Tanager. This form is sometimes called Blood-red Tanager, a name I much prefer. Then a bird right next to it caught his eye, a gorgeous Blue-backed Tanager! This was one of our main goal birds, a really tough bird to get. Unfortunately, he was too high in the tree tops to get photos.  We got another life bird, a Chestnut-rumped Woodcreeper. We only heard a number of birds in the flock, but it was still fabulous to get this kind of action.

We went back to the spot where we had heard White-fronted Manakins the day before. This time we were a lot luckier. A male came in very close. My photos are not fabulous, but they do show the heart shaped spot on the front. I also captured the beautiful blue rump patch. Martin commented that we were now cooking with gas. Then he had to explain exactly what that meant to Sean. A troop of Golden-handed Tamarins ran through the trees above us. It was a really wonderful morning!

When we returned to the cabin, I checked the stump for the Fer-de-lance. Sure enough, there he was. Other people staying at the lodge came by to take his picture. I was still really stoked about seeing him. After lunch we birded around the compound for a while. We watched a mother Tufted Coquette come in and feed two juveniles sitting in a bare tree. A small mixed flock flew in, with mostly honey creepers and dacnis. We did find a Guianan Tyrannulet in with them.

I went back to the cabin for a snack and stood on the porch for a while. The Long-tailed Hermits were still feeding in the flowers below. Some movement caught my eye. A Guianan Warbling- Antbird was popping in and out right next to the porch. Even though we had seen this bird before, I loved watching it. Antbirds could become my favorites.


Before dinner we drove down the main road again. A Pectoral Sparrow was calling. It wasn't a life bird, but they are really cool looking, so I tried very hard to see it. While I was looking for it, Martin found a puddle where antbirds were coming in to drink. There was probably an ant swarm nearby, as he and Sean heard a White-plumed Antbird, which is an ant swarm follower. We saw a few birds flying back and forth, and then they were gone.  Driving back we flushed a hawk. It was sitting on the ground, probably eating something. It flew up and landed in a tree a bit up the road. Originally, Martin thought it was a Black-faced Hawk. Sean said it was a Black-and-white Hawk Eagle. We got it in the scope and Sean was right. Daylight was fading, so we headed back for  our last dinner at Brownsberg.