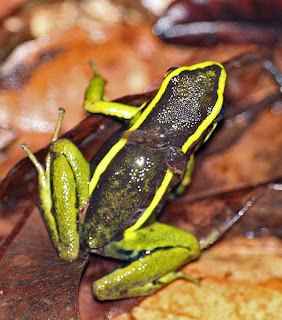 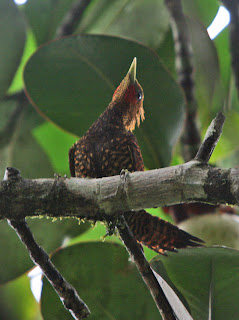 Waking up at Brownsberg involves some amazing sounds. My alarm clock was the daily chorus of the Red Howlers. If someone was out in the forest and didn't know how these monkeys sound, they would probably be terrified. The grumbling roar a group makes can be felt almost as much as heard.

Then I would notice the frogs. There always was some kind of frog sounding off. It seemed like every time I heard a call and asked Sean what it was, he would reply, "A frog." I had no idea just how many sounds frogs can make. The first bird I usually heard was the squeaky sound of a White-necked Thrush. The early morning view of Lake Brokopondo with the sun rising over it, was memorable.

Breakfast wasn't until 8:30 AM, so we dressed and hit the trails near the compound. There were large puddles on the road, which were full of some of those frogs I mentioned. I could see a frog head sticking up out of the water. Then Martin pointed out that it was actually two frog heads, doing what frogs do in breeding season. We looked around and it looked like a frog orgy. There were coupled frogs all over the road and the puddle. There should be a lot of tadpoles in Brownsberg.  We then came across several Three-striped Poison Dart Frogs, including one with two tadpoles on its back. These frogs carry their tadpoles, instead of the young living in water.

We passed a group of stylishly dressed teenagers on the path. Sean explained that they were the winners of a TV competition, similar to our American Idol show. It was done with all high school students. A tour of Brownsberg was one of their prizes. These kids didn't look dressed for jungle hiking, some with jackets and wool scarves on, but they did look very hip. They appeared to be having a good time, skirting the deep puddles, laughing and talking. They turned left and we went right.

A small thicket held several birds. We found both Dusky and Black-headed Antbirds working deep in the brush. A Coraya Wren started singing. We had heard this bird in the past, but had never seen it. I played a clip of its call on my iPod and it popped out. It flew across the road right in front of me. Sean commented that he liked seeing me smile like that. We also got decent looks at both antbirds.

We moved further down the road, and Sean heard a Lined Forest Falcon calling close the road. We stopped and scanned, but the bird was buried deep in the foliage. He played a tape and the bird responded, but it didn't move. The teenagers came walking by talking and laughing. The bird became quiet and we decided to move on.  We stopped a bit further down the road to listen for another bird. Martin and I happened to glance behind us; the forest falcon flew up the road towards us, angling off
into the trees just behind us.

Sean heard some different monkeys, White-faced Saki Monkeys. Of the eight species of monkeys in Suriname, this is one of the harder species to see. They came into view in the trees above us. These monkeys have the craziest tails I have ever seen on a monkey; they are huge! They almost look like a skunk tail, without a stripe. Sean said that Amerindians use the tails as dusters, after they eat the monkeys. I was really getting into the monkeys! We also heard Spider Monkeys, but never saw them. (By the way, I said we had Spider Monkeys on our first day in Suriname. They were actually Squirrel Monkeys! Sorry about that).

We returned for breakfast and enjoyed watching the Gray-winged Trumpeters eating the scraps that Rocky threw out for them in a small patch of woods next to the restaurant. Red-rumped Agoutis wandered among them. There was a flowering tree next to the restaurant, which we staked out for a little while. Martin spotted a Tufted Coquette. Coquettes, a type of tiny hummingbird, were one of my nemesis birds. There are a number of different kinds, some with crazy feather patterns in their gorgets and crowns. I have been in range of several different species, but have never seen one. I couldn't find the one Martin was looking at and then it flew. We worked a bit longer and finally, I had victory! A female came in and fed; not as flashy as the male, but I still felt a sense of relief.

Martin had a few targets that he wanted very badly, Guianan Red Cotinga, Red-and-black Grosbeak, Black-throated Antshrike and Band-tailed Antshrike. My most wanted bird was Capuchin Bird, a cotinga with one of the craziest calls ever. Sean had several locations where we had a good chance for these targets. The grosbeak was less predictable, but we were going to try. Of course these were not our only targets, but we did plan on putting some effort into them. We got into the van and drove to the first stop. Sean played his tape of the Capuchin Bird. There was a long time lek in the woods, close enough for them to hear the tape. Nothing, not a sniff. We moved down a bit and tried the antshrike tapes, same result. We walked a trail, only to find a tree fallen across it. We wiggled through the woods around it, and went on, hoping for the Guianan Red Cotinga. Again we batted zero. We did come across a small flock and added a few birds. We had plenty of time to try again, so we moved on.

We returned to our cabin, checking for the Tufted Coquette again. We heard a Ferruginous-backed Antbird calling in the woods next to where Sean parked the van. He tried a tape, but it didn't seem to care at all. We went up for lunch and met several people who were also staying there. They were all Dutch, but spoke English. Rocky's wife had put out some appliquéd wrap skirts that some of the Maroon women had made. They were really lovely and I planned on buying at least one. We were a bit distracted by the birds, so I put it off.

There is a beautiful overlook in the main area of the compound. There is a fruiting tree just behind the benches, where you can sit and leisurely watch for flocks in the tree tops below you. This tree attracts a lot of birds, including a Waved Woodpecker. I am a huge fan of woodpeckers, so I was very excited when one flew in. I was even more excited when I actually got recognizable photos. This area was also great for watching raptors soaring. That day, Swallow-tailed Kites gracefully flew above and below us.

I returned to the cabin, where several Red Howlers were in a tall tree near the van. As I looked up at them I spotted a Green Aracari, a member of the Toucan family. Martin and Sean returned and we took the trail towards another lookout. We didn't go very far, when we discovered a fruiting tree. A Guianan Toucanet was chomping down. A mixed flock of dacnis, tanagers and honey creepers worked the tree. We decided that this tree was worth staying at for a while. It was getting a bit late, so we decided to go to the overlook another day, and headed back. After dinner I found a different gecko in the house, though the first one was still in the bathroom. The frogs were still calling.

Hello, We´ve been reading your excellent post and we´ve found that you had visited Costa Rica in order to watch birds, so we just love the Nature, specially our birds, and it´s interesting because our website Costa Rica Tours has some pictures related, might be you´ll be interested.