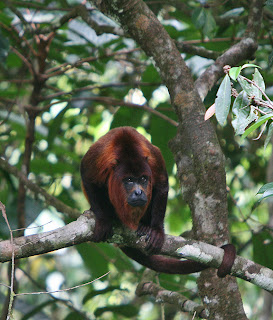 I woke up a bit earlier than expected on this day. The lights, which had gone out the night before, suddenly came back on, along with the air conditioning at about 3:00 AM. I turned the lights off and enjoyed the air until about 5:30 AM, when we arose to start out for the day. I kind of wished we had more time at Colakreek, as we didn't get to bird much at all, but we had a ways to go and quite a bit more to see.

We left the park in semi-darkness. Our first stop was on the road back to the main highway. A group of Variable Chachalacas were roosting right off of the shoulder. We pulled up just as they were starting their dawn chorus. This was a new chachalaca for us, which was great, but they are just as noisy as the ones in Texas. As soon as we got a good look, we left to look for quieter birds.

We made another stop right outside the airport, looking for Rufous-crowned Elaenia and the local subspecies of White-fringed Antwren. We walked into a brushy area and began our search. Martin and I both spotted a large bird flying over, a Pinnated Bittern, which was not at all expected there. The antwrens were very responsive to Sean's tape and jumped right now. It took a bit longer to find the Elaenia, but we were successful. Then we heard a Rufous-crowned Crake calling nearby. We worked very hard to see it, but the grass was very thick. Finally Martin saw it run across the trail next to him. I never did see the little so and so, but I was still happy. A few birds were feeding in the trees, and we added Red-shouldered Tanager to our list.

We then left and returned to Berlyn to look for the Glossy-backed Becard. I know I already mentioned it, but I really liked this spot! We didn't even get to the bridge when we started spotting birds. A McConnell's Flycatcher played hide and seek with us. Toucans called in the background. The Point-tailed Palmcreeper put on another show. It was tough, but we tore ourselves away and crossed over the bridge. We walked into the cemetery and I had to wonder if we would have a repeat of the day before.

We started scanning tree tops, and then we heard a call. There was the Glossy-backed Becard as high up as he could get, singing. My neck started aching from looking straight up. We were thrilled when the female joined him. I tried to get some photos, but the distance was too far to get anything recognizable. I still kept them, though, putting them in my bad pictures of great birds folder! I was able to get some photos of their nest, though they are not fabulous, either. As we walked out we watched a Guianan Warbling-Antbird hopping around in the foliage near the bridge. Our smiles were ear to ear.

After leaving Berlyn, we visited a spot that Sean had for Black Manakin and Saffron-crested Tyrant Manakin. I am a big fan of manakins. They are little birds, but their leking behavior is fascinating. If you have not seen it, check out this video of one species that "moonwalks" http://www.youtube.com/watch?v=PDYpW3zyXqQ. Disregard the silly woman. We pulled onto a sand road, which Sean had said was just a wide path not long ago. Unfortunately, huge dump trucks were now using it, hauling out sand. This did not help our quest. We didn't have a sniff of the Black Manakin and only heard the Saffron-crested Tyrant Manakin calling. We would have an opportunity to try again, after we finished at Brownsberg, so we climbed back in the van and got on our way.

The drive to Brownsberg Nature Pake was not that far, but the drive up from the main road is a tough one. There is no way you could do it without four wheel drive. It took us at least an hour and a half to reach the top. I felt a little bit bruised by the time we got there, though it was not the worst road I have traveled. We stopped along the way and had Swallow-tailed Kites soaring overhead. They were joined by some Plumbeous Kites. The view of the forest along the road just got better and better. The park is at an altitude of 500 meters, not that high, but high enough to be a bit cooler and provide some amazing views.

We pulled into the compound where we were staying. It is made up of several cabins, some open shelters for hammocks, a few educational buildings and Rocky's restaurant. We parked the van and got out.  Sean pointed out a flock of large birds wandering along the forest edge, Gray-winged Trumpeters! We had heard that they were fairly easy to get here, as Rocky was putting out food scraps in a wooded area, but this was ridiculous. They were no more afraid of us than chickens would be! When we had seen Dark-winged Trumpeters in Brazil we had to practically become invisible to even get a glance at them. These birds are absolutely beautiful, with a green and purple iridescence across the chest.

After checking in, we went to our cabin, which was awesome; not because of it being luxurious, which it was not by a long shot, but because of the view of Lake Brokopondo from the porch, and the surrounding trees and vegetation. It was worth the cold water showers. We unloaded our stuff and went back to Rocky's for lunch. Our first meal was really good, a barbecued chicken with cole slaw and rice. Sean said he could just live on rice, but I was a bigger fan of the chicken.  We finished up and went to start our first afternoon of birding.


We went back to the cabin to get our gear. Sean pointed up to a tree right next to the back porch and said "Welcome to Brownsberg!" A troop of Red Howler Monkeys were sitting there giving us the once over. I must have taken 100 photos of them. I have never seen monkeys so well. The chief male was very impressive looking. Several of the youngsters were clambering around, hanging by the tails, and basically showing off. I was ecstatic!


We could hear White-throated Thrush singing everywhere. I asked Sean what a whooping call was, which sounded similar to mot-mot, but very loud. He said "A frog." This became of a theme of this stay. Probably 75 percent of the times I asked what a call was, he would reply "Another frog." The calls varied to tiny chirps to almost pig like squeals. Brownsberg is definitely frog heaven. He told us we would see the frogs that whooped when we went to dinner. I wondered if they might be on our plate!


We did a bit of walking, picking up a few species here and there. Sean showed us some Poison Dart Frogs, which I always like to see. Then the sky became very threatening, so we headed back. As I arrived at the stairs down to our cabin, a big clap of thunder sounded. Just as it ended I heard one of my all time favorite bird calls, a Screaming Piha. I was really hoping to hear them at Brownsberg, but they didn't seem as vocal as the ones in Peru. It started pouring, so we went inside.


There were some issues with water at the compound. We were told to be very careful and not waste any. My hair was feeling really grungy and I was aching to wash it. The rain was so heavy that it was like a torrent coming down off of the roof. I went inside, got my shampoo and proceeded to wash it in the run off. It felt so good! I also rinsed out a couple of shirts and some pants. I wasn't a Girl Scout for nothing.


Unfortunately we didn't get to do much more birding because of the rain. We went up to dinner, which was a great soup, and sure enough we did see the frogs. The storm had knocked out the power earlier, but it came back on. The cabin was not air conditioned. It also didn't have a key. Someone had taken off with it some time before. No one seemed at all concerned about this, except us. Sean assured us that theft had never been a problem. He was right, we never had any trouble at all the four days were were there. When we came back to the cabin, we were greeted by one last creature, a large gecko, who was making our bathroom his home. He had an injury on his back leg, which did heal while we were there, and he was missing a couple of toes. I was happy to share the room with him. The sleeping arrangements were a bit spartan, but I was tired enough to not care. The open window let so many wonderful night sounds in. I was in love with this place.