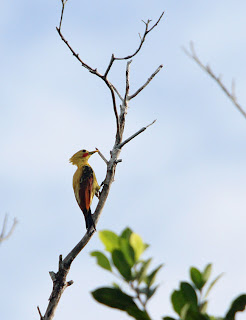 Sean picked us up at about 7:00 AM and we headed back the airport. No, this was not going to be our shortest trip ever; there is actually very good birding around the airport. Just south of Paramaribo is a belt of savanna with some gallery forest. The soil is white sand over red clay. We had birded a similar type of habitat in Brazil at Rio Azul. There are a number of birds adapted to this area that we were hoping to find. Unfortunately, traffic was heavy in the city, so we didn't get as early a start as we had hoped, but we were still confident.

There is a road that circles the outside of the runways of the airport. This can be a good spot to look for Giant Snipe, one of Martin's target birds. Unfortunately, it wasn't a good place on that day. We did see a Roadside Hawk, and Swallow-winged Puffbirds were common, perching in the trees along the road. A White-headed Marsh-Tyrant, a very sharp looking black and white bird, was sitting on the fence by the runway. A few White-winged Swallows were on the power lines. We walked in some tall grasses, looking for the snipe, but all we ended up with were chiggers. I was a bit amused that Sean got a little excited about an Eastern Meadowlark. Actually it is nice to see a common bird through someone else's eyes sometimes.

It was getting late in the morning, so we wandered over to the area where the restaurant we were going to eat lunch at is. We stopped at a creek with a small trail into the woods. Before we saw any birds we came across a rather odd scene. There were several baskets on the ground and pieces of colorful cloth. Streamers were hanging from some of the trees. The most peculiar thing was that some of the trees with wrapped with more of the cloths. Sean explained this was a site where an Obeah ritual had been done. Obeah is a religion similar to voodoo that is practiced by some in Suriname.

We heard a bird calling and then saw a Mouse-colored Antshrike fall across the creek. I was particularly thrilled when a Cream-colored Woodpecker flew in. I had seen this bird in Brazil, very briefly flying away through the woods and the day before I had gotten good looks at Peperpot. The best part of this bird was it perched in the open and I got some photos. The pictures aren't great, but it is always fun to photograph a bird you love.

It was lunch time, so we drove to the restaurant Sean had chosen, called Cotjie's Corner. It's a tiny place with a couple of tables on an open porch. Sean had called earlier to arrange our meal. The food was so good! The owner's wife, who was the cook, was so friendly. It was very pleasant. The yard had some habitat and we saw Silver-beaked, Palm and Blue-gray Tanagers working the trees. Brown-throated Parakeets came into the tree tops. I was very happy being there.

After we finished we drove to a nearby Amerindian village. We got out of the van and started looking for birds. I heard someone calling to us and saw a man standing in the doorway of one of the small houses. He seemed a bit upset. Sean was talking back to him in Sranan Tongo, the patois spoken all over Suriname, a mixture of Dutch, English, Portuguese and West African languages. Sean related the conversation and said the man was the head of the village and was not happy with us being there. I had my camera with a large lens and I think he was worried we were there to take photos of the village. I understood his concerns. They deserve their privacy and they should not feel like they are on exhibit. I never photograph people without their permission, particularly in the tropics.

We got back in the van and started to drive out. We turned the corner and stopped by a small pond. Sean heard a Sulphury Flycatcher. We started scanning and found it fairly quickly. I looked up and saw the head of the village walking towards us in a very determined manner. I thought "This is going to be trouble." We weren't in the village proper, but I guess we were still too close. He spoke to Sean and then Martin joined the conversation. He told the chief that he understood and that we were happy to leave the area. The chief said we should have asked before we came in and Martin agreed. Finally he said it was fine. The village welcomed us and we could stay. I did feel badly that we had intruded.

The next stop was one of my favorite places of the entire trip. The village of Berlyn sits on a black water creek. A wooden foot bridge crosses the creek, leading to the cemetery, which sits in an open area of a lovely woods. This cemetery is probably the best place in Suriname for Glossy-backed Becard. We started across the bridge, but were immediately distracted by the birds. A Point-tailed Palm Creeper flew in, a bird we had only seen poorly in Peru. A Long-tailed Woodcreeper was beating a caterpillar to death on the trunk of a tree. We were ecstatic to see a Black Nunbird perched up nicely. I picked out a very small manakin, sitting in the foliage. I pointed it out to Martin and he confirmed it was one of my most wanted birds, Tiny Tyrant Manakin. It wasn't exactly a "looker", but what a fabulous name! I had not really expected to see it, as it normally involved a rather difficult hike.When we were driving out, I saw a Squirrel Monkey sitting out in the open. I got a few photos, but they were taken through the car window, so they aren't great.http://www.flickr.com/photos/sngcanary/sets/72157628080143227/

We tore ourselves away and walked though the woods to the cemetery. Sean played the call of the becard, but there was no response. This bird sits up very high, so we scanned the tree tops. Sean pointed out a nest in the tree he saw the becards in most often. Unfortunately, our birding Karma seemed to have run out. Sean said we would return in the morning, so maybe we would have better luck. We did have a White-winged Becard, but that was a poor second.

The afternoon thunder clouds started to roll in. Sean said we should go ahead and go to the place we were spending the night, Colakreek, a park with cabins. This is a very popular spot for family weekends. It is called Colakreek because the water is the color of cola, almost black. Even though the color of the water is very dark, it is very clean. Tannins from the trees and red clay cause the water to appear almost black. There can be some very good birds here. We pulled into the headquarters to check in and the sky opened up and it started to "chuck it down", as Martin would say.

The cabin was great. It had sliding doors that opened to reveal a kitchen, a bathroom and two bedrooms. The bedrooms were air conditioned, which made us very happy, as it was rather hot. We carried our stuff in, using a large umbrella to keep dry. Martin and I settled in, arranging our stuff in the small bedroom. I closed the windows and turned on the air conditioning. Within a few seconds the power went out and the cabin went dark. I said a few choice words and said we needed to look for the breaker box, figuring I blew a circuit breaker. We walked out of the room just as Sean came out of his. He said he was talking to his wife in Paramaribo and she said the power went out there at the same time. Wow, I had really done some damage! I asked Sean if power outages were common, and he said that they weren't, but there had been some recently.

The rain had slowed to a drizzle, so I kicked off my shoes and went out to walk on the sand roads. It felt so nice to be barefoot. Sean and Martin joined me and we started looking for birds. It was close to sunset, so there wasn't much to see. Sean took us to a spot along the creek, where we watched Red-bellied Macaws come in to roost. We walked  back to the cabin, opened the windows, and settled down for the night. It wasn't unbearably hot; the breeze was actually quite nice. During the night the lights came back on, waking me up. The air also came on, and the power didn't kick off again, so I guess I didn't cause the black out.

Here are my photos for the day-