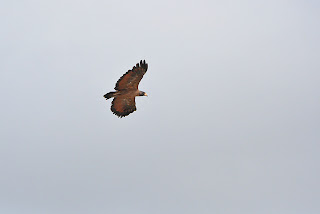 Morning came a lot quicker than I wanted. In fact, it didn't seem like we had a night. Our flight had arrived after midnight. It took about 45 minutes to get to our hotel, the De Luifel. By the time we showered, (this hotel has amazing showers, by the way.) it was probably close to 2:00 AM.  Sean Dilrosun, our guide, suggested we not start too early. We decided on leaving the hotel at 7:30 AM, after we had breakfast.

Luckily, the anticipation generated enough adrenaline that we didn't feel too tired. Our first stop was the Paramaribo Botanical Gardens. When I hear the words botanical gardens I imagine a manicured place with planted flower beds, open trees and carefully tended lawns. Get this vision out of your mind; this garden is nothing like that. Sean explained that the government used this area to see what plants might grow well in Suriname. It is a wild tangle of large trees and under-story.  Some of the plantings are exotics, but the birds didn't seem to care one bit.

We parked the car and walked over to one of the more open areas. A large flowering tree sat off to one side.  Within a couple of minutes I spotted one of our main targets for Suriname, the only true endemic, Arrowhead Piculet. Piculets are tiny woodpeckers. They can be difficult to find, but this one was no problem at all. Sean played the call and the bird flew right in. I was able to get poor, but recognizable photos. Those of you who know me, know I have an aversion to the word "cute", but I have to admit this bird did fit that word well.

We turned our attention back to the flowering tree. Our other targets at this location included several hummingbirds. Green-throated Mangos are found there, but Black-throated Mangos are also there and are much more common. We picked through the birds, looking for a green throat. Martin saw one, but I still had not. (Maybe payback for the Crimson Topaz incident?) Finally he and Sean got me on one, so I was happy.  We wandered through the gardens and I found a Green-tailed Jacamar, a life bird for both of us. I had seen Cinnamon Attila before, but I had never noticed, until Sean pointed it out, that their call sounds suspiciously like they were saying something very rude. I have to say, I will probably never forget that call!

We finished up at the gardens and went searching for our next target, Rufous Crab-Hawk. We drove to a location on the Suriname River where Sean said we had a good chance to see one. Boy, was he right! We pulled up and walked out on a dock. Sean let loose a piercing whistle, imitating the hawk's call. Almost immediately the hawk soared over head and landed in a nearby palm. We got great looks. Then a different bird, a Black-collared Hawk, flew overhead, giving me another life bird. A Pied Water-Tyrant was hopping on eye level right next to the car when we got in. They are a really sharp bird, as black and white birds often are.

As we drove away, Martin and I said "Crested Caracara!", a bird we know very well from Texas. Sean said, "No, you mean Yellow-headed." We said, "No, we mean Crested!" He stopped the car and sure enough, they were Crested. He had never seen this species in that area before. The closest sighting he had had was quite a distance, near the border. He said his wife would be very happy if they stuck around, as they are her favorite bird.

We drove through downtown Paramaribo, which is a very interesting place. As we drove along the waterfront, Sean pointed out a ship wreck in the river, the remains of a German ship from World War II. The architecture of the city reflects it's Dutch roots. The largest wooden church in the world is there. Also, a large mosque is next to the city's  Synagogue. There are huge Hindu shrines throughout the city and countryside.

The people of Suriname appear to get along better than any place I have ever been. The population has a surprising mix of ethnicities. Before we left Martin had said it would be a little different in Suriname from other tropical countries we had visited. He is about as fair skinned as you can get. He thought he would blend in well in Suriname, with all the people of Dutch descent. Wrong! The largest ethnic group in the country is made up of what they call Hindustanis, that is people of Indian descent. There are also a large number of Indonesians. In the interior there are Amerindians and people referred to as Maroons, the descendants of escaped African slaves.  The only light skinned people we saw were tourists from the Netherlands.

We crossed over the very broad Suriname river to visit Peperpot Nature Park. First we stopped at a small Indonesian restaurant for lunch, which was really good. Sean knows good food and the places to find it!. We then drove to Peperpot, which was one of my favorite spots. The butterflies were fabulous. We got great looks at Black-crested Antshrike, which I had seen before, but was delighted to see again. Martin thought he had a Black-throated Blue Warbler, but Sean said they didn't get them in Suriname. Then he saw it again and realized it was a Hooded Tanager, which is marked very similarly to a Black-throated Blue. We found one of our main targets, Blood-colored Woodpecker, which Martin was able to photograph, but I wasn't so lucky.  Silver-beaked, Palm and Blue-and-gray Tanager seemed to be in every tree. The Cinnamon Atillas taunted us with their "F.U." calls.  A Violaceous Euphonia flew in just as we were getting ready to leave.

We packed up and headed back across river. Sean knew a location for Crimson-hooded Manakin, a bird we had dipped on at the botanic gardens. We walked into a wooded area next to a slow flowing creek. Sean pointed up and said "Spider Monkeys!" I looked up and could see their silhouettes crossing the canopy above us. He told us there are 8 species of monkeys in Suriname. I was really hoping to add at least a couple to my mammal list.  Right after the monkeys we heard the manakin. I got great looks and a poor picture, which will go into my "bad photos of great birds" folder.

We climbed back into the van and headed out towards the ocean. Martin badly wanted to see Long-winged Harrier, and this is where they can be found. Unfortunately, the sky looked rather threatening. We had some rain showers, which occurred almost every afternoon. There was no sign of the harrier, but we found a nice spot on the road to the shore where some shorebirds were feeding. The biggest surprise was a White-rumped Sandpiper, which should have been long gone. A couple of Yellow-hooded Blackbirds were flitting around. We drove down the road to the sea, which was a muddy brown. Sean explained that the mud flow from the Amazon river kept the water less than pristine. There are no good beaches in Suriname, unfortunately.

There was a large open shed next to the parking area, where there were three piles of burning charcoal about 6 feet long with a sheet of corrugated metal covering it. Sean explained they were cremating bodies. It was a bit unnerving. The water was right up to the wall in front of the road. He said that the water is quite shallow, and when the tide is out, there are huge mud flats. We didn't see a single tern or gull go by. We checked out the shorebirds again, and the rain started up again.

Sean knows a great roosting place for egrets and Snail Kites in a private housing development. We finished the day there, watching Snail Kites pour in from every direction. It was really impressive! Unfortunately, it was raining pretty hard, so we headed back to the hotel for dinner and another great shower! Seriously, that shower was the best part of the hotel!