Suriname- Intro and the Layover in Curacao, November 8, 2011 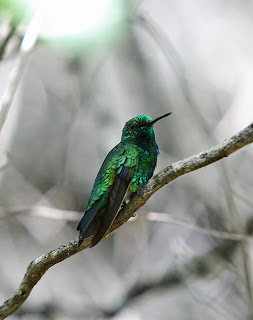 Every time I told someone we are going to Suriname the reply was the same, "Suriname? Where is that?" Some people asked if it was in Africa, some asked if it was in Asia. Because of that, I thought I should begin this blog with a quick Geography lesson. Suriname is located in NE South America, between Guyana (remember Jim Jones?) and French Guyane. It is bordered by Brazil on the south. When I was a child I remember it being referred to as Dutch Guyana. It is a small county, just larger than the state of Georgia in the USA. There are about 500.000 people, most living in and around the capital of Paramaribo. It is not well known as a birding destination, yet, but it should be. About 80% of the country is covered by rain forest. I will include more facts in my upcoming blogs.

Getting to Suriname was a bit of a challenge. I had won some free tickets at work on American Airlines to anywhere in the lower 48 states, Canada, Mexico or the Caribbean. We debated for quite some time about where to go. Finally, we decided to fly to Curacao and they go on to Paramaribo, as we could get some very inexpensive tickets from that point. Because of connection times, we had to spend a night and day in Curacao. Darn the luck!

We arrived in Curacao after sunset and headed for our hotel. The pizza in the hotel bar was decent. The cold shower before bed was not. (What the hell, Clarion?) We got up early, scarfed down some breakfast, and hit the island for a day of birding. The area around the hotel was quite lovely, with a lot of palms and flowers. The beach across the road was beautiful. The first bird we saw in the parking lot of the hotel was a Troupial. It was quickly joined by a Yellow Oriole trying to get into the trash cans.

Curacao is a bit limited as far as birds go. There are no endemic species, but there were a couple of birds we wanted to look for. Both Martin and I had never seen Ruby Topaz Hummingbird. Supposedly, it was very easy to see in the area where our hotel was, particularly on the grounds of the Marriott hotel and casino, next door. We headed over there and started our search. Almost immediately, we found a Blue-tailed Emerald Hummingbird, which is considered a bit rarer than the Topaz. We were feeling pretty confident, but as we walked the grounds, our confidence took a bit of a dive. We decided to head northwest up the island to Christofell National Park.

Curacao is not a huge place and roads are great. We did a detour to a viewing spot for American Flamingos, which were standing right where they were supposed to be. We added a few shorebirds, egrets and herons to our day list.  We were a bit surprised at how hilly the island is. The vegetation was mostly scrub and tall cactus. It looks like the air would be very dry. It wasn't. The humidity was rather oppressive.

We arrived at the park headquarters and asked about the best place to look for the Ruby Topaz. One of the park rangers was very helpful. He pointed out a tree that they hummingbirds particularly like, but he said they were not always easy to see. He suggested a trail to two small ponds, where we might also have a shot. We decided to try the trail first and headed out.

We ran into another Blue-tailed Emerald almost immediately, along with a stunning Yellow Warbler. The warbler is a different sub-species than we get in Texas, sometimes called Golden Warbler. The streaking on the breast is heavier and it has a red cap on the top of the head. It is quite striking. A bit further down the trail we spotted a large hummingbird with a rusty tail. We couldn't see the front of it and it flew off very quickly. We struggled to figure out what it was. It looked all dark, probably due to the light, so we ruled out Ruby Topaz and thought it was one of the Amazilias, which is not supposed to be found on Curacao.

The ponds were quite small, but very birdy. A number of "our" warblers were around, including Northern Parula, Prothonatary Warblers and Northern Waterthrushes. Unfortunately, our target did not show. We headed back to the headquarters, got a couple of cold cokes and sandwiches and started watching the tree that the ranger pointed out. A hummingbird zipped by, heading up the hill. Martin got up to throw out our trash and look in the direction that the bird had flown. Just as he turned his back, I saw the male Ruby Topaz, flashing his golden throat. I called out, but before Martin could turn around, it was gone.

We kept assuring ourselves that it would return shortly. It didn't. We waited, sometimes less than patiently. I got up and circled several other flowering shrubs, but with no luck.  After what seemed an eternity, the bird returned, and we got decent looks. We realized that the bird we had seen on the path earlier, must have been a Ruby Topaz, after all. We had another cold coke in celebration and decided to drive a loop through another part of the park. It was already about 2:30 PM and the park closed at 4:00 PM.

The loop was not particularly filled with birds, but we did manage to find Crested Bobwhite, a new bird for me. There was a spectacular view off of the tip of the island. Time was getting short, so we kept moving, not wanting to get locked in when the park closed. We made a stop at the head of the orchid trail, where we discovered a female Ruby Topaz, building a nest! Unfortunately, she was deep in a thorn tree, and I was not able to get any photos.

We drove back to Willemstad and did a quick run through the waterfront area. What a lovely town it is! The architecture is beautiful.  The cruise ship, the Crown Princess, was in dock and we were both stunned at the massive size of it. We then headed back to the airport to return the rental car and catch our flight to Suriname.

Our flight went well, making a brief touch down in Trinidad. We had a little discussion about whether I can say I have been in Trinidad now, but decided it really doesn't count. Our guide, Sean Dilrosun, met us at the airport when our flight landed, just after midnight. We drove to Paramaribo, which took about 45 minutes and checked into our hotel.