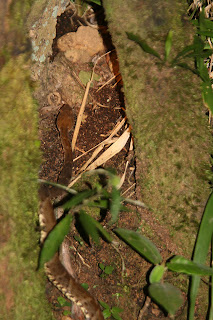 The Red Howlers, frogs and White-necked Thrush woke me again. I could only smile, as sleepy as I was. The previous mornings it had been a bit foggy when we got up. This morning was glorious; the view of the  sun rising over the lake from the porch was spectacular. We walked up the main road to a clearing with a dead tree where birds seemed to stop often as they fly from area to area.

A poison-dart frog was singing loudly. Sean located it and we watched this tiny frog inflate his throat, making his loud call. A gorgeous morpho butterfly actually landed, allowing me to take some really nice photos. Unfortunately, it was only the underside of the wing, but I was more than happy to get that. It is always a bit frustrating to see these huge iridescent blue butterflies come bounding down the trail without ever putting down. A flock of Painted Parakeets landed in the trees on the edge of the clearing, giving us the first life bird of the day.

We returned to eat breakfast and check out the "hummingbird tree", but I didn't see the Tufted Coquettes. After we ate our eggs, we drove back to the spots where we had "fished" for the Red Guianan Cotinga, the antshrikes and the Capuchin Bird. Again, there was no response. We did happen on a small flock and finally saw Buff-cheeked Greenlet, a small vireo, that says its name.  We heard some other birds, like Cinereous Mourner, Ferruginous-backed, Black-headed and Dusky Antbirds. It was a bit frustrating. We tried very hard for White-fronted Manakins, which we heard, but never saw.

I love butterflies, as you can tell if you have looked at my photos. Martin and I are always on the lookout for good bugs. We found a great one on this day. A gorgeous turquoise blue/green hairstreak perched on a leaf above our heads. I have never seen color like this on a bug. It was a bit distant, but we both managed to get a few reasonable shots. When we returned, Martin did some research. He contacted a couple of experts asking about it. It turns out it is a Evanus sponsa. It does not even have an English name. There are only a few photos of museum specimens known. We possibly took the first photos of a living one ever!

We added another monkey to our growing list, Golden-handed Tamarin. We had now seen four of the eight species of monkeys found in Suriname. Along with a Coati and a Tayra, a large weasel, we were accumulating a nice mammal list. Red-rumped Agoutis were also common. I always hope for a cat of some sort, but I never really expect to see one.

After lunch Martin and Sean went to the main overlook, while I returned to the cabin to get something to drink. I was always thirsty and craved cold Diet Coke. The cabin was set in a cut away of a steep hill. You could easily jump from the yard across to the roof, if you wanted. There were stone steps leading down to the porch. The three walls that were not up against the cut were surrounded by dense vegetation and trees. I almost always saw Long-tailed Hermits feeding in the flowers below the porch railing.

I climbed the steps back up to the yard and just as my head cleared the top I saw a group of three Black Currasows, large birds about the size of turkeys, with crazy, curled crests, on the trail in front of the cabin. I got off a few quick shot with my camera as they ran into the forest. Currasows can be quite shy, so I was very happy to get even lousy photos of them. I walked up to the overlook and told a Dutch couple, Roland and Daisy, who were there birding with a wonderful guide named Serrano and they hustled down to see if they could see them, too. (They did!)

Birding the overlook is a great way to spend the afternoon. There are benches to sit on, some shaded by a fruiting tree that gets all kinds of honey-creepers and woodpeckers. Below is thick forest, running far down the hill to the lake. The view of the tree tops allows you to see any birds perching up, or flocks moving through. Hawks, swifts and martins use the thermals, so there is always something to look at.  I was a little disappointed that I had missed a White Hawk, but it soon returned to a nearby tree to perch. Roland, Daisy and Serrano returned from their Currasow hunt and joined us. A large bird called and then flew by, an Ornate Hawk Eagle! http://www.martinreid.com/Misc%20website/SUR11OrnateHEagle.html (Martin's photo) It was great to see a King Vulture overhead.

I was sitting looking down at the trees below us, when I saw some movement. I scanned carefully and realized it was a family group of monkeys. I called them out, and Serrano said "What color?" When I replied gray he became very excited. They were Weeper Capuchins, which are the rarest monkeys found in Suriname. Everybody got looks at them as they worked their way through the trees. I got a really awful photo of one of their backs.  We now had five of the eight species!

A bit later in the afternoon Sean decided that we had been lazy enough. We chose to walk to another overlook past our cabin. We had started out for this one the day before, but got distracted by some tanagers and honey-creepers. This walk was a bit more up and down than anything else we had done, though not rough at all. I am rather slow, due to my fear of breaking another ankle. I was lagging about 50 feet behind Martin and Sean, walking up a hill. I was watching where I was stepping, as it was rocky and there were some exposed tree roots.

I noticed a rather wide column of ants moving along the trail. I got to the top of the hill and told Sean. They didn't look like the army ants we had seen in Brazil, but I still thought it was worth mentioning. Sean scrambled down the hill and was thrilled to discover that they were army ants! An ant swarm is the holy grail of tropical birding. All kind of birds follow these swarms. They are called "ant birds", but they do not actually eat the ants; they eat the things scrambling to get away from the ants. Unfortunately, this was not a large swarm, only a satellite column, but it still held promise.

Sean played a tape for Rufous-throated Antbird and one answered. It flew up the hill to where we were watching the ants and put on a bit of a show. I didn't get any photos, but Martin got this one:  http://www.martinreid.com/Misc%20website/SUR11RufousthrAntbird.html. As you can see, its a bit crazy looking! Then Sean tried for White-plumed Antbird, another ant swarm specialist. Sean and Martin heard it call, but unfortunately, it was a bit shyer and never came out in the open.

We moved on to the overlook, where we saw more Golden-handed Tamarins. Swallow-tailed and Plumbeous Kites were circling. We found a Short-billed Honeycreeper in with the Purple and Red-leggeds.  A Spangled Cotinga was sitting high in a tree across from us. The view was the best one yet. All I could see was forest stretching out to the horizon. Suriname is covered with more rain forest, than any other country, about 80%. It was getting a bit late and I didn't relish climbing down the rocky slope in the dark, so I told Martin and Sean I was going to head back.

Earlier in the day,  Serrano and Roland told us about an encounter they had with a creature I had been aching to see in the tropics, a Fer-de-lance. This is one of the most venomous snakes in the world. I love reptiles; I wanted to be a herpetologist when I was a kid. I am always excited to get to see a new one, especially a poisonous one. I guess it is the adrenaline thrill. Anyway, I was keeping my eyes on the path coming down the same hill where I found the ants. I saw some movement, and there was a small brown and yellow snake wrapped up in a ball. I stopped and took a couple of photos. I had no idea what it was, but I was happy to see it. As I was approaching the cabin I ran into Serrano and Roland and told them about the ants. I also told them again how jealous I was of their snake.

Martin and Sean came back and I showed Sean the photos of my snake. It was some kind of whip snake,  a non-venomous one. We got ready and went up to dinner. Serrano and Roland came in and told me that when they passed me, they found another Fer-di-lance right off of the path where I had just walked. Auughh! I missed seeing one again! I did feel just a little uneasy knowing I was so close and might have stepped on it if I wasn't looking where I was going. I am not afraid of snakes, but I do respect them.

After dinner we decided to do a little after dark "hunting", with Serrano driving the van and Sean spot lighting. It is possible to see some amazing animals on the road, including Jaguars. Snakes are also sometimes seen crossing the road. Sean had once found an Emerald Tree Boa. We cruised around, but the only animals we saw were bats. We stopped at a clearing and looked at the stars, which were amazingly bright. Sean knows the constellations well. We decided to call it a day and head back.

Sean parked the van in front of the cabin, in the normal spot. We all got out and he was shining the spotlight so we could see. Then he called out, "Here is your Fer-de-lance!" There was a hollow stump between where we parked and the cabin. The snake was in the stump! I had stood next to that stump over and over again during our stay. I asked Sean if he thought it had been in there the whole time, and he said possibly. I think I was more excited about seeing the Fer-de-lance than anything I else we had seen that day.