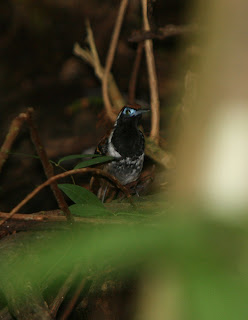 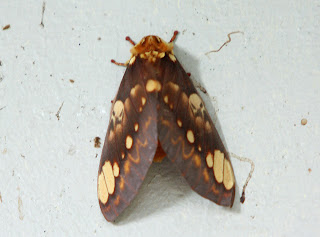 I was having a little trouble sleeping during our stay at Brownsberg. Some of it might have been all of the insect bites I got, because I stupidly did not use insect repellent. Some of it might have been the sounds in the night, which included a Vermiculated Screech Owl. For whatever reason, I was really tired when I woke up this morning. I told Martin that I wanted to have a little lie in and would join Sean and him at breakfast. Deep in the back of my mind I knew this was a bad idea, but I really did want a bit more sleep.

I immediately fell into a pretty deep sleep. I was awakened by Sean, who was shouting, "SHERIDAN! CAPUCHINBIRD!" He and Martin had found a pair at the far end of the compound. Martin knew just how badly I wanted this bird, so he told Sean to come back and get me, while he played bits of the call back to them to keep them around. I jumped out of bed and started putting my clothes on. My little toe on my left foot got caught in the hem of my pants and I heard a loud CRACK. The pain that shot up my foot went clear to my scalp. I said to myself "Oh, shucks. I think I broke my toe!" Actually, that is not quite what I said. I didn't care if it was broken or not. I put on my socks and forced it into my sneaker. I limped up to the van, climbed in and told Sean, "I think I might have broke my toe." I actually was laughing when I said it.

We got to the clearing and I hobbled up to Martin. His eyes were huge. He said one of the Capuchinbirds almost took his hat off it flew so close. I was a nervous wreck thinking they may have gone. Then I heard it, the craziest bird call of all, as far as I was concerned. It is impossible to describe, so here is a link to a Youtube video of them displaying- http://www.youtube.com/watch?v=cxrQqqTa0hM
I think I would have been happy even if all I did was hear them, but then they flew in. One perched up on a bare branch and I got absolutely the worst photo of a bird I have ever taken! I was ecstatic, despite the on-going pain.

I was still in shock, when Sean told me they had found a very cool moth, that I really wanted to see, one with skulls on its wings. I thought this was the bug mentioned in Silence of the Lambs. It may have been the one that Thomas Harris was thinking of, but the movie poster shows an old world moth. Anyway, we walked over the showers and I was able to photograph the moth. The scientific name is Citheronia hamifera, commonly known as the Royal Moth. There were a number of other great looking moths on the wall and a small mantis that looked like it was made of tarnished silver.

I hobbled back out to the clearing and Martin had something really special in the scope, a male Tufted Coquette. I had only seen females and juveniles. This guy was more than fantastic! Here is a link to Martin's digiscoped photo- http://www.martinreid.com/Misc%20website/SUR11TuftedCoquette.html
This guy was amazing! The gorget feathers were beyond fantastic!

I was finding it a bit easier to walk, though I still was in some pain. I wasn't limping quite as badly.  We returned to the cabin and I checked for the Fer-de-lance and was a bit surprised to not find him in the stump. Now I was a bit worried! If he was in the stump I wasn't going to step on him. Now that wasn't the case! Who knows where he went?

A Ferruginous-backed Antbird started calling from the woods. This is a bird that is supposed to be easy at Brownsberg. We had heard it several times, but were never able to get on it. We worked our way down into the woods and Sean played his tape. The bird finally came in and we got incredible looks. I even got a few poor photos. This was my second favorite bird at Brownsberg. I have always like antbirds. This trip made me love them.

This was our last day at Brownsberg. We packed the van at 11:00 AM, check out time. We did do a bit more birding and had one last lunch at Rocky's restaurant.  I noticed some butterflies fluttering around and took a few photographs. I really did not want to leave. I felt like I could have stayed for months at Brownsberg, cold showers and all. We got in the van and started the drive down the rocky entrance road. My toe was not hurting that much I began to suspect it was not actually broken. One the way down we ran into some Bearded Saki Monkeys, species number 6!

We arrived back near the airport in the mid afternoon. We were going to work for some of the birds we missed at the beginning of our trip. Sean took us to another spot to look for Black Manakin and Saffron-crested Tyrant Manakin. It was threatening rain again. We walked into the scrub and finally did find Black Manakin. The Safron-crested remained elusive, though we did hear it. It did sprinkle a bit, but not badly. Sean took us to a spot where Red-bellied Macaws roosted. We saw dozens and dozens of birds flying in. Even though we had seen them before on both this trip and in Brazil, it was still impressive.  We added our final member of the toucan family for the trip, Black-necked Aracari at the same spot.

We drove back into Paramaribo and checked into the same hotel that we had stayed at earlier. Sean asked if we would like to have dinner with him at a good Chinese restaurant and we agreed. He gave us a time when he would swing by and pick us up. The hot shower at the hotel was pure bliss after the cold showers at Brownsberg! Sean came by and we went over to his house, where we got our lists in order. We went to the restaurant, which was really good and his wife met us there. It was a really nice evening. Sean and his wife are both great company, a lot of fun to be with. We made arrangements for Sean to pick us up in the morning for a last day of birding and returned to the hotel, where I was tempted to take another shower. At this point, my toe was a little swollen, but I had no pain to speak of. I am not sure what I actually did to it, but I wasn't complaining.