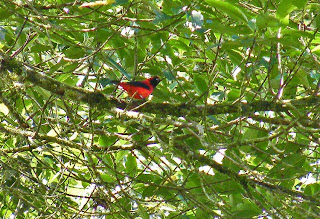 We would be leaving Abra Patricia this morning, so Martin got up very early, about 4:30 AM to try for the Long-whiskered Owlet one last time. He was joined by Alex and Juan Jose. They were next to the tower, an area that the owl had been seen at before, when a small, almost tailless. owl shaped bird flew right past Juan Jose and Martin. Was it the owlet? Since I wasn't there, I can't say, but Juan Jose and Martin both are fairly sure it was. Martin was pretty jazzed when he came back to get me up to go to breakfast.

After we ate we went back to the gate area one more time. We looked again for the Lulu's Tody-tyrant, but only heard it. We packed up and headed down hill for the final time. We stopped a few times before getting to Afluentes. We finally got good looks at Bar-winged Woodwren, a much wanted bird that we had been trying for for several years. We saw a number of Swallow-tailed Kites again.  I felt a little sad to be leaving this area. We stopped at a pull out and I picked out a bird that Martin was excited about despite its rather subdued appearance, a Drab Hemispingus, a type of tanager. We did see a pair of Lulu's Tody-tyrants nearby.

We arrived at Afluentes and immediately picked up a good mixed flock. The tanagers were thick. There were Golden, Flame-faced, Beryl-spangled, Saffron-crowned and Grass Green, all birds I have seen before, but love so much. Then Martin found a Blue-browed Tanager, which I wanted very much! Martin was on a bit of a roll. He spotted a flash of red and black. At first he thought it was a White-winged Tanager, which we had seen a few days before at this site. Then he realized it was one of his main targets, a Vermilion Tanager and it was a stonker, as he would say. A beautiful red, about the size of our Scarlet Tanager, but with a black mask similar to a Cardinal, this was a real looker. We ended up seeing four of them.  Then Alex found a bird that trumped the tanager, at least as far as I was concerned, a Lanceolated Monklet! It perched for ages, giving good looks and crummy photos, well MY photos are crummy.

It was hard to leave, but we had a ways to go, so we took off, stopping at the chicken restaurant in Agua Verdes one more time. We had driven just a bit further when we saw a very long snake crossing the road. Snakes are almost as good as birds as far as I am concerned. (I wanted to be a herpatologist when I was a kid.) We backed up and stopped; then we jumped out of the car. The snake was crawling down a concrete drainage ditch, so we got great looks and a few photos. It was black with diagonal yellow stripes. Juan Jose said it was some kind of rat snake, and not venomous, which was a little disappointing. Martin had seen a large Coral Snake a couple of days previously, so I was wanting something a bit more dangerous.

We pressed on to Rioja. In the late afternoon we visited the forest at Yacumama again, where we had seen Point-tailed Palm-creeper on our previous visit. It was rather quiet, but we did add both Amazon and Green Kingfisher on the river, as well as Black-fronted Nunbird. A Tropial showed well on the other side of the river. As we were leaving I spotted a Capped Heron, a big favorite of mine, in one of the lagoons.
Photos for the day:
http://www.flickr.com/photos/sngcanary/sets/72157624255335918/