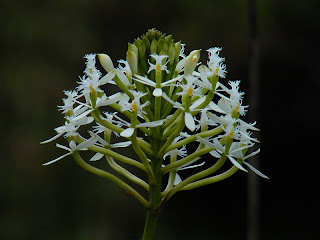 We woke up early to a nice breakfast and hummingbirds in the garden of the hotel. I was delighted to see a Green-tailed Trainbearer, not a new hummingbird, but as I said before, I love long tailed hummingbirds. Kathy, Jens and I headed down to Lake Pomacocha with Alex and Juan Jose, while Dan and Martin stayed at the hotel, as there wouldn't be any new birds for either of them. The lake was really beautiful. A long pier led out to a covered dock.

We had spent a some time earlier in the trip looking for rails, which was a lot of work and not always successful. I knew Plumbeous Rail was at the lake, but didn't hold a lot of hope of seeing it. I was stunned when we almost immediately saw one wandering around the open. We actually saw a couple. A Striated Heron sat on the edge of a small fishing canoe beached on the lake edge. The second life bird I got was White-cheeked Pintail, a bird I should have had a long time ago. A Grassland Yellow-finch flew out of the reeds. Yellow-billed Pintails were feeding in the swampy grass next to the lake. As we were leaving Alex spotted a bird that I didn't think I would see this year, as I assumed I had missed them in Texas during migration, a female Bobolink!

As I walked down the pier to go back to the van I noticed I felt just a little bit "off". I figured I was just a little tired. We got back to the hotel, packed the van, bought a cool t-shirt and took off for the famous Owlet Lodge at Abra Patricia. We stopped at a small store to get some Coke Zero and agua con gas. I was completely amused to see a sign next to the door advertising that this bodega was an authorized buyer of coca leaves. Coca is a major crop in this area, legally grown for coca tea. We left town and arrived at Abra Patricia fairly quickly.

Juan Jose parked the van inside the gate of the lodge and we started up the path to the buildings. The path is uphill, but isn't difficult. I started up and was surprised that I very quickly got out of breath and had to rest. The lodge is not at a high altitude, so I couldn't figure out what was wrong. By the time I got up to the top I knew. I was struck with a sudden attack of "tourista". I have done a good number of trips to the tropics and have never had any problem. I am pretty careful about not drinking the water, nor eating lettuce or other raw vegetables that I think have not been washed in purified water. Occasionally I sneak something I shouldn't, but I seem to have a very solid constitution. When we got to the cabin I took an Imodium and figured I would be fine.

The lodge doesn't do lunch, so we drove down hill to a tiny restaurant. The food was simple, but good and I felt fine eating. We returned to the lodge and again I had a hard time walking up. I sat for a while and watched the hummingbird feeders at the main building and was blown away by the number of birds. Emerald-bellied Puffleg was a new bird for me. Chestnut-breasted Coronets, Bronzy Incas, Speckled Hummingbird, both Violetears, Collared Incas and one of my favorites, Long-tailed Sylphs were all common. There were also feeders by all of the cabins. I was still feeling very tired.

Alex suggested a hike to the tower. I decided to stay at the cabin and rest and just bird around the immediate area. I wasn't too concerned because Martin and I would be returning to the lodge later in the trip for a couple of days.  I ended up sleeping some but did find some gorgeous orchids and a few good birds. Probably the best was a pair of Chestnut-crested Cotingas, a bird that we had seen in Colombia, but is very easy to miss. The group returned and said they had not seen a lot.

We went up for dinner and were presented with Pisco Sours, which I believe is the national drink of Peru. Normally I would have drank mine and then Martin's, but I only sipped a tiny bit. Then the soup was brought out. It was beautiful, a thick tomato with cheese on top. I took one look and told Martin I couldn't eat. I got up and went back to our room.  Martin and the others went out looking for the Long-whiskered Owlet, an almost mythical bird that has been found at the reserve. They didn't have any luck, which is the normal result, but Alex stayed out later and did actually hear one call. I was already asleep when Martin got back. I hoped that I would feel better after a good night's sleep.