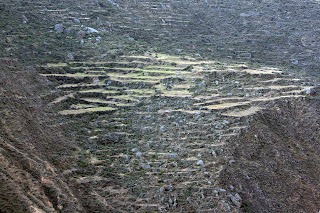 We woke up in our little hotel in Miraflores and had breakfast. Our new guide, Alejandro met us right on time in the lobby. We checked our big bags with the hotel clerk, as we would be returning the following night and took off for the Santa Eulalia valley in the high central Andes. We were very happy to see Henry, our original driver. The drive out made me realize just how huge Lima is. The valley is not that far from the edge of Lima, but getting to that edge seemed to take forever. Even in the city there are high rocky hills/mountains. The traffic is fairly heavy.

We finally turned off the main road and started heading up. Where we were going was an extremely high altitude and the road climbed quickly. Our first stop was a small gorge. We were looking for Oasis Hummingbird, which we found, but we also got a little bonus. A Giant Hummingbird put on an incredible show, flying straight up, higher and higher, then dropping like a rock. This is a bird I had only seen very briefly in Ecuador on our first trip. I wanted a better look and was thrilled that this one was so cooperative. This hummingbird is the largest in the world. The first impression that I had was that it was a swift. Its so large you can actually see the wings beating. I hate to say it, but even though the Oasis was a life bird, the Giant was the star for me.

We then moved up even more. My memories of this day are more about the drive up than the birds. It was a most riveting experience. The road is gravel and very narrow. It twists and turns around rock faces and the drop below the road is spectacular. It seems to be barely one lane, but trucks come up and down, which we had to pass. At every turn Henry honked to make sure if anyone was coming the opposite direction they would know we were there. Roadside shrines where people had not made the curves were very common. At one turn there were nine little ones joined together, perhaps a van or bus that didn't make it. Its funny, I should have been terrified, but I wasn't. Henry's driving was superb and I was feeling rather fatalistic.

To demonstrate how high up this road I took these photos. We spotted a bridge in the distance that looks unbelivably high. It passed over a deep ravine and looked tiny in the distance.
http://www.flickr.com/photos/sngcanary/4701933914/
We finally arrived and passed over; then on the other side we climbed even higher. Here is the photo I took of the same bridge from the other side.
http://www.flickr.com/photos/sngcanary/4701934248/in/photostream/
I hope this gives some inkling of just how high up we were getting. It was beyond breathtaking.

We did see some incredible birds along this track. A small flock of Mountain Parakeets flew in, giving good looks. A Bronze-tailed Comet, a type of hummingbird, was a thrill. Collared Warbling-finch and Giant Inca Finch were great additions to our trip list. I loved the Mourning Sierra Finch. It reminded me a lot of our Harris Sparrow, with a black face and pinkish bill. We continued to climb.  A perched Spot-winged Wood Pigeon even let me take some crummy photos.  I was also very happy to get Blue-and-yellow Tanager. This is bird that I had to work very hard to miss on our other trips. Its what Martin would call a "tart's tick", a bird that any decent birder should have gotten long ago!


At lunch time we reached our main destination, a Polylepus grove where Alejandro had seen one of our most wanted birds, White-cheeked Cotinga. This is a very difficult species to see, and we didn't really expect to see it this day. We thought we would have to come back at dawn the next day for our best chance. We saw some other great birds here, Black-breasted Hillstar and Black Metailtail, both high altitude hummingbirds. Several Andean Condors flew over, causing me to catch my breath. Even without the cotinga we were happy. Then, to our astonishment one flew in! We got brief, but great looks. Unfortunately it was too far away for Martin to photograph, but we were extremely happy.

We drove back down to the village of Huachupampa. We had been told the accomodations here were extremely basic, so we were not expecting much, but the hotel was fine! We did have a bunk bed in our room, but the bottom bunk was a double, so that was ok. It was very clean and the lady who ran the hotel was delightful. We had a very nice dinner. After dinner Martin and Alejandro compared their photos from the day.


In all of our trips to South America I had never seen the Southern Cross. It always seemed like it was cloudy, or the view of the stars wasn't great. I also thought I would need someone to point it out to me. I had asked Alejandro at dinner if he knew the constellation. He said yes, and I thought after dinner we might look for it, but he and Martin were engrossed in conversation so I decided not to press it. I went upstairs to go to bed, but before I went into the room I went to a large open window and looked out towards the south. There it was, plain as day. I almost cried. This might have been my last trip below the equator, so it meant a lot to me. Since then I have found myself humming the Crosby, Stills and Nash song, Southern Cross all the time. By the way,  I have heard that there is a "false cross". If you think this is what I saw, please don't correct me. I would rather stay deluded. To add to my happiness a pair of Band-winged Nightjars were circling the steeple of the little church, catching bugs in the light.