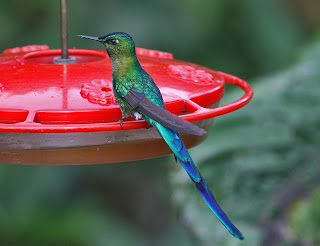 It was wonderful waking up at the Owlet Lodge at Abra Patricia! Its a lovely spot; the accommodations are wonderful. We walked down for breakfast, which was bread, juice and eggs. They sat the eggs in front of me and I immediately gave them to Martin. I am not much of an egg eater even when my digestive track is functioning well. Juan Jose asked me if I was not well. I told him I was not and he reached into his pocket and handed me some tablets. Alex told me to have some coca tea, which seems to the recommendation for everything in Peru. I took both. One or both did help throughout the day. I did eat the bread, which was always good there, and grabbed some crackers from the snack table for later.

We walked down to the gate by the road to look for Lulu's Tody-tyrant again. I really wanted to see this bird, partially because I think its such a cool name. We didn't have any luck again, but there was an even bigger reward there! One of the men from the lodge at the lodge, whose name has completely slipped my mind, much to my chagrin, came down and pointed out that an Ochre-fronted Antpitta was calling across the road. We went over and he led us up a side path to a different area. He was extremely skilled in imitating the call and fairly quickly the bird came in, allowing decent looks. I was extremely happy with what I saw, but Martin wanted to get some photos, which I would have, too if my good camera lens wasn't broken. I decided to walk back and let them try to get more. It always seems to me the fewer people the better.

I went back and birded around the gate. I was thrilled to get excellent looks at Silver-backed Tanager, which I had only seen in flight before. I worked the area where the Lulu's had been before, but still didn't see it. Martin, Alex and Juan Jose returned and we packed up to head down hill again. The area between the lodge and Agua Verdes is so good I think we could have worked it for a week and still found new birds. We stopped at the spot where we had seen the Royal Sunangel previously and I got an even better look. The navy blue color caught the light perfectly. I grieved for my camera lens. We heard both Andean and White-eared Solitaires calling, but still never were able to see either one. Solitaire song is so lovely, its the best part of the bird, so I was ok with that.

We moved down a bit farther and stopped. A Lulu's Tody-tyrant was calling by the side of the road! We were able to get excellent looks. It is an incredibly cute bird, tiny with a rusty head, bright yellow belly and a gray back. It rivaled the antpitta for the bird of the day at that point, at least for me. It's range is tiny. We dropped even further down. A Swallow-tailed Kite cicled lazily overhead and we got a great look at White-throated Hawk.

We decided to work the area around Afluentes again, as it was noted as being a good spot for Equatorial Gray-tail and Vermilion Tanager. The mixed flocks were present again, but not in the numbers that we had previously. We went to Agua Verdes to eat the "chicken's under the table" restaurant. (the dogs and chickens were starting to recognize me!) After lunch we birded around town a bit and then headed back to the lodge, arriving mid afternoon. I was starting to feel a bit rough again, so I opted out on hiking.

Martin made an incredibly generous offer. He lent me his very nice 100-400 mm lens with image stabilization. He was going to do some digiscoping instead with his other camera. I was ecstatic, as none of my bird pictures taken with my Fuji had been worth a flip. This lens is head and shoulders above what I normally use. I parked myself by the hummingbird feeder and went to work. I am very self critical of my photography skills. I always wonder if anything I take is even worth keeping. On this day I got photos I have only dreamed of taking. The hummingbirds were crisp and clear, with beautiful color. It was amazing. I realized that good equipment makes all the difference! Now I am going to have to save a couple of grand to get the lens I want.

We had a nice dinner and Martin went out looking for the owl again. I decided to go to bed and look at my pictures. I was sound asleep before I got a dozen photos in. My bed was great and the mountain air is soporific for me, at least at night.

Note: I got a nice email from Juan Jose yesterday correcting something I had written. The sarcophagus at Pomochocha was NOT Incan, but Chachapoyan, another pre-Colombian culture. Thanks for the correction, Juan Jose! I do remember him telling me that now, but its been a few weeks and there was so much to remember!