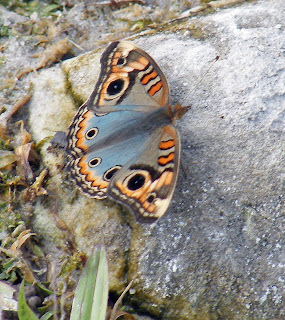 We got up very early to head to Morro del Calzado, an isolated large hill outside of Rioja. We wanted an early start because this area is good for nightjars and owls. We were lucky, flushing a Spot-tailed Nightjar. We heard a Rufous-bellied Owl calling, but it did not respond to the tape. We arrived at the trail head right at dawn. We spent a little time looking around the parking area for Mishana Tyranulet, but were not lucky with that.

As we were preparing to start up the trail we had our first big surprise of the day. A pair of swifts flew over. Martin has spent a lot of time studying swifts, both in the field and with museum skins. He grabbed his camera and started shooting and called "White-chested Swift!" This is a bird that is known to be in Peru, but has very rarely been seen. He was able to get recognizable photos. Then a pair of White-chinned Swifts flew over; again he was able to get photos. It was a great start to our visit in the park.

We finally started up the path and started picking up birds in mixed flocks. Alex found a Scale-backed Antbird, which was fairly responsive. Pardise and Gold-and-Green Tanagers worked the trees, along with Blue Dacnis and Purple Honeycreeper. Martin called out immature Bay-headed Tanager, but when we got a good look at it we realized it was a target bird we expected later in the trip, Dotted Tanager!  This was almost as big a surprise as the swifts. Alex confirmed the ID. Score! Another bird we were happy to see, however briefly, was the foot-hill form of Striped Manakin, which could be split in the future.

This was a day with a lot of heard birds. Little Tinamou, (I think I have seen one Tinamou for every hundred I have heard!) several species of flycatchers, even a couple of hummingbirds are on this list. One heard bird was particularly frustrating. We had worked our way up to a small stream crossing, when it called, a Sharp-tailed Streamcreeper. This is a bird that we have tried for numerous times. We used playback, but it only moved further down stream. At least this time we got to hear it, which is more than we have gotten in the past.

We came back down to the parking area and resumed our search for the Mishana Tyranulet, but had no success. Martin got a bit distracted by some dragonflies, but we finally dragged him away to start our trip back up to Abra Patricia and the owlet lodge. As we retraced our drive from the day before, we saw a lot of the same birds, but added a few new species, Flycatchers were particularly good. We stopped for lunch again at the "chickens running under the table" restaurant. Unfortunately my appetite was suffering from my on going bout of digestive problems, but between the chickens and the bewildering antics of the participants of a karaoke show on the t.v. hanging on the wall, it was a bit of fun.

After lunch we walked a trail through some white sand forest behind the town the restaurant was in, Agua Verdes. Martin and Alex saw a Napo Sabre-wing, but I missed it. I did find a butterfly that I had never seen, a blue Buckeye. We arrived back at the Owlet Lodge and settled in again. The hummingbird feeders were as busy as ever. I was feeling a bit droopy, but did manage to eat that night. The lodge gave us a bottle of red Peruvian wine, which was lovely of them. Luckily it was a dry red, not sweet, but I have to confess I won't be going out to buy Peruvian wine any time soon! But its always been my experience, once you get one glass down, the second is much better.
Photos for the day (almost all bugs, no birds)