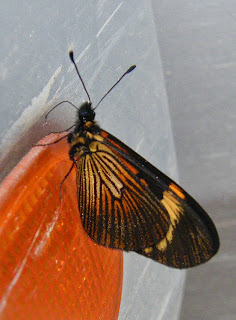 This was the day we were saying goodbye to Jens, Kathy and Dan. We would continue on by ourselves for the rest of our trip with Alex and Juan Jose until we returned to Lima and got a new guide and driver. But there was still a lot of birding to be done before our farewells. I was feeling much better, particularly after the coca tea prescribed by Alex for my ailments.

We began our birding by the gate to the reserve. A muddy path across the road is the best spot for Ochre-fronted Antpitta. We walked up the trail through thick forest. We arrived at a spot with enough of an opening to look up a hill through the trees. Alex played the call and the bird called back, but never came into view. We crossed back to the reserve and Juan Jose told us he had seen a Lulu's Tody-tyrant, one of our main target birds at the lodge, in the trees below the parking area. Unfortunately we couldn't re-find it. We got in the van and started down towards Rioja where we would part company.

Our first stop was a biggie. We were looking for Royal Sunangel, a navy blue hummingbird. It was my second most wanted hummingbird for this trip. We parked at a work area where both men and women were staging to carry supplies up a steep mountain for a radio tower. It was really impressive to see workers hoisting up bigger loads than I could carry from the car to the front door and starting up a mountain trail that led straight up to the top, no switchbacks here. They regarded us with a little curiousity.

The best spot to see the Sunangel is on the top of a little bluff next to the road. That path was steep, too. Initially I thought I would not try it, as I could see down hill from the roadside pretty well, but after the group glimpsed a Sunangel zip by, I clambered up. We did see it again, though not as well as I had hoped. There wasn't very much room to stand, so I started down. I was being over cautious, as there was a little scree and I felt like I could easily slide. One of the men waiting to carry supplies up saw me and ran up the hill to assist me down. I was really touched by his kindness! The others followed me down shortly after. We heard both Andean and White-eared Solitaires singing, but never saw either.

We travelled further down hill. stopping several times to work mixed flocks along the road. White-capped Tanagers were real crowd pleaser (if you can call our little group a crowd) We had We arrived at an area called Afluentes that proved to be wonderful. The tanagers alone with worth the stop, with Golden, Flame-faced, Blue-capped, Beryl-spangled, Green-and-gold, Blue-necked and Yellow-throated. We also scored big with Versicolored Barbet. Probably my favorite bird at this spot was Speckle-chested Piculet, a tiny woodpecker. This area is well known as a spot for Vermilion Tanager, but we had no luck.

We moved further down hill and had lunch in Aguas Verdes at an interesting chicken restaurant, called "El Eden". It wasn't exactly my idea of paradise. Inside it looked like it used to be a car garage. There was motor oil spilled on the floor and it was built of rough wood. While we ate a scruffy looking chicken walked under the table. (Watch out! You might be lunch tomorrow!)  There was an assortment of pregnant dogs and a mother cat with kittens, but the food was good and the waitress was very nice.

We departed for Rioja and arrived at our hotel. We bid our friends goodbye and checked in. Our original plan was to drive to Tarapoto with Kathy, Jens and Dan, where they would depart for Lima, and we would return to Rioja for the night, but Gunnar called and told Alex and Juan Jose there was a change of plan. There were road closures going on and I think he was worried we might get stuck coming back. Gunnar arranged alternate transportation for them and Juan Jose and Alex stayed with us in Rioja.

After a little siesta we took off to bird an area outside of the city. There is a spot outside of the city called Yakumama, which was excellent!  Fork-tailed Palm-swifts were shooting by overhead. A Point-tailed Palm-creeper flew by very close in response to Alex's playback. We were particularly thrilled to see Huallaga Tanagers. A pair of Magpie Tanagers flew over, joined by the ubiquitous Palm and Blue-Gray Tanagers. A small pond held a Russet-crowned Crake.  All in all it was a very satisfying day.