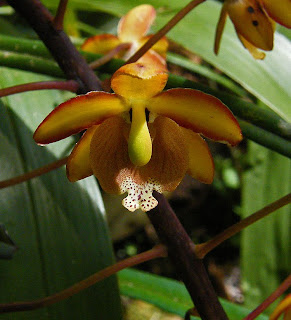 We headed fairly early going to a private reserve near Moyobamba. This property is owned by the family of one of the workers at Abra Patricia and we were delighted to see him there when we arrived. (This was the same guy who showed us the Ochre-fronted Antpitta. I am mortified that I can not remember his name!) The reserve is devoted to birds and orchids and it has plenty of both.

As we drove into the reserve there were Blue-backed Grassquits and Yellow-browed Sparrows singing. There was a beautiful palapa in front of the family home with wonderful plantings. We moved past this area and headed up a trail past a brushy area. We quickly picked up one of the specialty birds, Cinerous-breasted Spinetail. A bit further on, entering the woods there was a Golden-tailed Sapphire, working a flowering tree. The trail steadily climbed and we were being passed all along the way by farm workers heading up to the coffee plantation higher up. The land is fenced and well marked as a reserve on either side of the trail.

We passed through a gate into a heavily shaded area with several hummingbird feeders. Long-tailed Hermits and another Golden-tailed Sapphire were coming in. After a little while we headed back out to the trail and climbed some more. We crossed a creek and stopped at a spot where one of our main targets is sometimes seen, Fiery-throated Fruiteater. We heard one calling and started the search through the tree tops. Alex played the call, but the bird didn't seem too interested. Alex peered into a tree top above us and spotted it! It was sitting very still and he worked like mad to get us on it. Then it flew. We got an extremely quick look with little detail, but enough to see it what it was. Alex has the most incredible eyes! I had been scanning that tree for quite a while and would have sworn that there were no birds of any kind up there. We tried for a while to get it to come back in, but had no luck. It was a definite BVD, (better view desired).

I started back down, photographing some great butterflies. Martin, Alex and Juan Jose caught up. We caught up with a mixed flock and added a few tanagers and Wing-barred Piprites, a name I really love. Then we found a bird that we had missed a few days before, Mishana Tyrannulet. We were thrilled, as we thought we had probably missed it. It posed beautifully for Martin. We got a good number of other flycatchers. Finally we got back to the house.

We sat under the palapa and had an ice cold Coke, which tasted amazingly good. After resting a few minutes Juan Jose asked me if I wanted to see some of the orchids. I am always thrilled to see them so of course I said yes. We walked over to a shaded area where a large number of orchid plants were being tended. Many were not blooming, but the ones that were blew me away. Juan Jose explained a bit how different orchids bloom, some on stems, some actually in the middle of the leaves. The lighting wasn't great for my little point and shoot, but I did get a few shots. We headed back to Moyobamba for a great lunch at a "chifa", a Chinese restaurant.

After lunch we headed further down hill towards Tarapoto, where we would return to Lima the following day. Not far out of town we stopped along the road and walked back to a small bridge next to a large rock wall. There was a deep crevice in the rock where we saw three or four Oilbirds roosting quite close to the road. This was certainly MUCH easier than my muddy slide into a cave in Ecuador to see them several years ago. Even better nobody had to push my, um, posterior back up the muddy slope afterwards.

We arrived in Tarapoto in the late afternoon. The traffic there was unbelievable! The streets were curb to curb motocabs, the little motorcycle driven cabs seen all over Peru. I have never seen anything like it. We slowly worked our way through town to the country side and then to Juan Guerra, a tiny settlement on the river. It was very late in the day and we were losing light, but we still were able to do a little birding. We heard a couple of Coraya Wrens calling, but never saw them.

We walked up a cattle path to a hillside with a lot of bushes and grass. The vegatation was very thick. A pair of Chestnut-headed Crakes started calling. I was a bit surprised, as I always associate crakes and rails with water. Alex played their call and they responded strongly. They came very close, sounding like they were right by the path, but we never had a sniff of a look. I couldn't believe how close they were! South American birds must go to school to learn how to hide. We went back to the car, but Martin got distracted by the dragonflies in a small pond by the road, until it was too dark to see. We fought our back through the motocabs in town to our hotel.