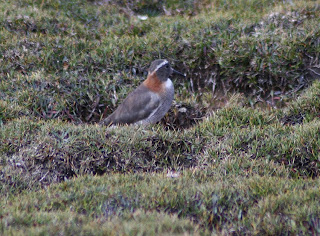 I would say I woke up in Huachupampa, but I wasn't sure I had any sleep. I am not sure why, the bed wasn't bad. I was comfortable, but for what ever reason, it had me concerned. Altitude sickness is more likely if you are over-tired. I had a little problem with it once before, and we had seen Jens have a bad time of it at the beginning of the trip. I made a conscious decision to take it easy.

We had breakfast at the hotel and started back up to the White-cheeked Cotinga spot. Martin was really wanted some photos and early morning was the best time. As we drove up we saw Andean Condors launching themselves off of the cliffs above us. We also spotted a new mammal for me, a Viscacha. Its a relative of the chinchilla, but resembles a rabbit with slightly short ears. That is until it turns around; the tail is similar to a squirrel's. It's fur is incredibly plush. It was beyond cute!

We arrived at the Polylepus grove where we had seen the cotingas the previous day. As we got out of the van we saw a Black-breasted Hillstar feeding near the road. Martin got some fabulous photos. I got some ok ones. A Giant Hummingbird flew up and down the stream by the cliffs, looking like a large swallow. We also got a great look at Black Metaltail. A Mourning Sierra-finch perched up nicely. The White-cheeked Cotingas flew in up the hill and Martin tried to get some photos. Unfortunately the distance made it difficult.

Martin and Alejandro decided to climb up the hill to the top of the cliffs above the road to try for better photos. Martin had our scope, his regular camera with the large lens and another camera with a smaller lens for digiscoping. I decided to stay down with the car and Henry, our driver. I was feeling the lack of sleep, so I rested in the car for a little while. Suddenly Henry went scrambling up the cliffs toward Martin and Alejandro. I didn't think any thing of it. Henry would go join them from time to time and he is as agile as a Mountain Goat.

After a while I got out of the van and walked up the road to where they had climbed the hill. As I got there I saw Henry coming down. He looked very upset. He stopped and between my bad Spanish and his worse English, he let me know that Martin had dropped his camera down the cliff. I said a word I can't repeat, knowing this was very serious. Henry kept making a rolling, tumbling motion with his hands. He then said the camera was ok, but the lens was smashed. This was the reason he went scrambling up the hill. He had seen the camera fall and went to retrieve it. I was sick to my stomach. Martin's photos mean so much to him. At least it was at the end of the trip, I thought, as we only had one more day.  I knew what that big lens cost and I knew we wouldn't be able to get another until we got home.

I waited for Martin and was shocked to see him grinning as he walked down. He said he was so happy that Henry had gotten the camera back with his photo card in it, that it was no big deal. Then he explained it was NOT the camera with the big expensive lens, but his digiscoping camera, which had a very inexpensive lens on it. Unbelivably, the camera body survived and is still working! I told him he needs to tell Canon what a great camera it is. He did get some good photos of the White-cheeked Cotinga, which are posted here:
http://www.martinreid.com/Misc%20website/PE10WhitecheekedCot.html

We drove further up, heading towards the Miloc Bogs where we had gone for the Diademed Sandpiper-plover early in the trip. We picked up a few birds along the way, including Junin Canastero, an endemic that allowed me to get good photos. Andean Geese were feeding in the boggy fields. As we were driving by some rocks, I saw a cute fuzzy bunny with a long squirrel tail and called out "There's a..., um....,  ah..., one of those Versace things!" Obviously I meant a Viscacha. Martin is still teasing me about that.

We got up to the bog and Martin was thrilled to almost immediately find an Olivaceous Thornbill. This high elevation hummingbird feeds on red flowers that grow right above the ground. Like a few other high elevation hummingbirds, it often walks around feeding on the ground, instead of flying. This was the last thornbill species Martin needed. He was trying to get better photos, while I figured I was lucky to get even the crummy one I took, so I started walking across the peat, avoiding holes where it had been cut for fuel. Suddenly a white, gray and rust colored bird jumped up and ran in front of me. It was an adult Diademened Sandpiper-Plover! It was so cool to see an adult, as the one we had earlier had been a juvenile. It was even cooler that I was able to get better photos.

We left and drove back to Lima, arriving at our hotel not too long after dark. We walked around Miraflores near the hotel looking for dinner. Most of the restaurants in that area are raither posh, and we were in no condition to do posh, so we settled for a neat little taco shop. The food was beyond good. We told the waiter that their tacos would past anyone's test in Texas. We returned to the hotel, packed our bags for our trip home the following evening and prepared for one last day, birding near Lima.

Here is my bird list for the day:
1 Andean Goose