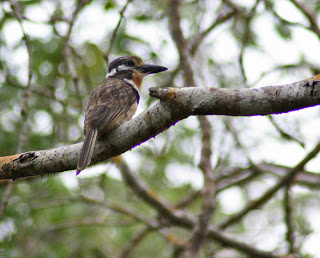 It was a new day, a new place and there were a lot of new birds to be seen. We had slept well. Our hotel was quite comfortable. We met Pablo and Jaime in the lobby and headed out to Los Flamencos Sanctuary, next to the village of Camarones. This reserve has a really interesting community of birds. There are shallow salt lagoons that are home to American Flamingos, Scarlet and White Ibis and many other wading birds. Even more interesting is the dry scrub forest surrounding the lagoons. Despite being on the coast, this is area is desert complete with large stands of cactus. If you don't see the beach you would think you were in Tucson. There are a number of endemics and near endemics that call this scrub home.

Our first stop was actually on the beach inside the perserve. Pablo had arranged for a teenaged boy, Diojohnnes, (I am totally unsure of the spelling of his name) who lives on the sanctuary grounds, to be our guide. He was not a birder, but he has amazing eyes and knowledge of the local fauna, including one of our main targets, Vermilion Cardinal. While waiting for Diojohnnes to join us, I walked down to the beach. A large dark backed gull flew in, a first winter Lesser Black-back! I called Martin over. It was kind of nice to show him a gull for a change! The bird flew on, but a second one came in a few minutes later. It also flew off, right before Pablo and Diojohnnes arrived. This was unfortunate, as Pablo had never seen one. They are fairly rare in Colombia. There is something ironic about seeing a bird that is fairly common at home, but really rare where you are currently birding. Its hard to get super excited, if you know what I mean.

We drove a short distance to an area that was good for the cardinal. One of the lagoons was nearby. We could see some pink shapes across the water in the early morning light. Scoping the water we picked out Roseate Spoonbills, a handful of American Flamingos, and two or three Scarlet Ibis, one of our targets. Sometimes its necessary to take a boat to see the flamingos, so we were lucky. Even though we had seen them before, it was great getting them for our Colombia list. We turned our attention to the scrub forest. Diojohnnes immediately found something of interest to me, a small snake! I don't know herps at all, but I really like them. I got a few photos, if anyone is interested in helping me ID it. It kind of reminded me of a Checkered Garter Snake, though not the same color.

We picked up a number of birds fairly quickly. Scaled Doves flushed up from the bath, which resemble our Inca Doves. Bare-eyed Pigeons flew by, which resemble our White-winged Doves. A Black-crested Antshrike came in close to investigate us, which doesn't look like a darn thing like anything we have in Texas. I really love antshrikes. They have fabulous calls, often heard in jungle movies, and a crazed look about them. We also heard a Barred Antshrike in the distance. Slender-billed Inezias showed well. White-fringed Antwrens were fairly common and very curious, coming close to investigate anyone whistling a pygmy owl imitation. Another target bird, White-whiskered Spinetail, was very cooperative. Things were going very well. We had still not seen the Vermilion Cardinal, but the day was young.

We were getting hungry, so we went back to the beach by Camarones, where there is an open air restaurant. While we were waiting for our food we birded the surrounding trees and picked up Yellow Oriole, Russet-throated Puffbird and Orinocan Saltator. A couple of local kids showed us some fish they had caught, happily mugging for my camera. We had a leisurely breakfast of eggs and plantain, watching the locals fishing in the surf with dug out canoes. Terns and Laughing Gulls worked the waves. Dozens of Snowy Egrets picked through the left overs from the fishing nets. A Whimbrel walked along the water's edge. We could see the snow capped Santa Marta Mountains in the background, behind the curve of the beach. I found myself thinking, "This is the feeling that the big inclusive resorts are trying to capture, but the real deal is so much better!" Sure, Camarones is poor. There were skinny dogs and a few pigs wandering around. It wasn't immaculately clean, like the Bogota area, but I still found it beautiful and consider myself extremely lucky to have experienced it.

We went back into the scrub, still hoping for the cardinal. We trolled with the iPod, and heard a few chips that sounded promising, but had no luck at all. One bird that was abundant was Prothonatary Warbler. It was so peculiar to see a bird I associate with wet wooded areas in desert scrub! We scored on Pileated Finch and Green-rumped Parrotlet. There is a riparian area where Glaucous Tanager is seen. Martin saw it, but I missed it. I had a Green Kingfisher, which Martin missed, but it wasn't a very good trade off, in my opinion! I found a frog/toad, flipped over on its back struggling to turn over. Its belly was streaked with the most amazing fluorescent pink! I flipped him over and got a couple of photos. Again, if anyone wants to take a shot at IDing it, I would appreciate the help.

This area gets extremely hot during mid day. The birds siesta and it makes sense for birders to siesta, too. We returned to Riohacha for lunch and a break. I did walk down to the beach for a little while and watched a number of Magnificent Frigate Birds. Even that was too hot, so I returned to the room and luxuriated in the air conditioning. Regrouping at about 3PM, we returned to Los Flamencos, picked up Diojohnnes and resumed our search for the elusive cardinal.

There were good birds, Scub Greenlet, Troupial, Northern Scrub Flycatcher and more antshrikes. We seperated Venezualian Flycatcher from Brown-crested Flycatcher. Buffy Hummingbird was spectacular! We came across a tree packed with White Ibis and a few Scarlet's thrown in for color. But there was still no cardinal. We tried another patch of woods, but had no luck. How hard could it be to find a cardinal? It looks very similar to our Northern Cardinal. The crest is a bit more extravagant, and the color is more intense. I expected it to act like ours. I don't think I have ever played an owl tape in San Antonio and not had a cardinal respond! Pablo was really trying, but it just wasn't happening. He did see a couple of females retreating into the scrub, but too quickly gone to get us on them. The sun was setting and it seemed completely futile to continue. We drug ourselves back to the car. Then Pablo called out excitedly. A beautiful male Vermilion Cardinal was perched in a low shrub! In ten minutes it would have been too dark to see it. Whew! We arranged to meet Diojohnnes in the morning and went back to Riohacha.