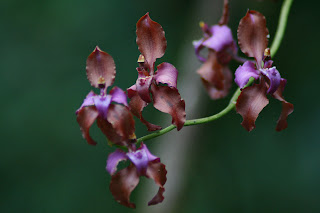 We began day 5 with a very happy reunion. Pablo Florez, our guide from our first trip had finished the tour he was doing and joined Oswaldo for the last day and a half of the Bogota portion of the trip. Pablo would be our guide for the last week of the trip to Santa Marta . We were also joined by a friend of Oswaldo. We were heading up to the Monteredando reserve outside of Bogota to look for several endemics, including Cundinamarca Antpitta.

As we drove up the mountain road Oswaldo discussed the trail. We had two choices, a very steep short trail, or a very long level trail. I was still struggling a little bit with my ankle, along with my bad knees and balance issues. I told the group I would be happy to stay on the road by the van and bird there while they did the shorter steep trail, even though it would mean missing the antpitta. Martin asked me several times if I was sure and I was. I hated the idea of missing a bird, but I had been feeling like a drag for the group, so I thought it would be better all around.

They headed up hill and I started wandering up and down the road, seeing what I could find on my own. I actually did pretty well. I found a flock of tanagers and even was able to photograph a Saffron-crowned and a Beryl Spangled. I spotted several hawks, a pair of Roadsides and a White-rumped Hawk. A flock of Flame-winged Parakeets flew through the valley below me. (These had been a big favorite on our previous trip) But all was not completely smooth.

Our driver Ever had stayed below with me. As soon as I walked around the corner on the road and he couldn’t see me, he would follow me, usually talking on his mobile phone. I know he was feeling protective of me, which was very sweet, but it did make birding a little more difficult. I didn’t want to say anything, as he was being very nice, but I did not feel like I needed protecting! It was still very pleasant. The weather was perfect. I found a few butterflies to photograph.

It seemed like the group was gone a long time. It was close to lunch time when they finally came down. They did not look happy at all. The antpitta had been within 10 feet of them, calling its head off, but they never saw it. They never even saw a twig move! It actually happened a couple of times. I felt badly for them. I count heard birds, but Martin and Dan don’t. We ate a snack and then started looking for some of the other birds found in the area.

We worked our way back down hill in search of Ochre-breasted Brush-finch. We heard a couple, but never could get them to show themselves. It was a bit frustrating, to say the least. Then, very close to the road, we heard the Cundinamarca Antpitta calling! It was as close as the one up the hill had been, but again we never saw anything indicating the bird was there. I do have to admit I was secretly happy to have heard it, but I tried not to show it, as Martin and Dan were not able to count it. We did finally get great looks the brush-finches. A flock of Flame-winged Parakeets landed right above us. We also had a few of my favorite hummingbirds, Booted Racket-tail, Long-tailed Sylph and Collared Inca.

We started back to Bogota , hoping to find some flowering trees to look for more hummingbirds. It was getting late in the afternoon when we stopped in Guayabetal, a small town. We walked behind a restaurant and found a beautiful tree with brilliant orange flowers. Our “friends” the violetears, were working in the flowers. Then we saw one of our targets, Green-bellied Hummingbird. A few tanagers and honey-creepers joined the hummers. Some local kids came up and stood with us, asking questions. We let them use our binoculars and Martin set up the scope for them. They all seemed to be enthralled. We talked about the bird life of Colombia and in their area. A few adults joined them. It was a really pleasant interval!.

We finished up, stopped for some fresh arapes, and headed back to Bogota. Again, we didn't have a huge list for the day, but the quality was definitely there!

Pictures for the day:

Another great day birding. I have to go and check out your photos.