Day 3 Who Would Ever Believe We Were Looking for Grackles? 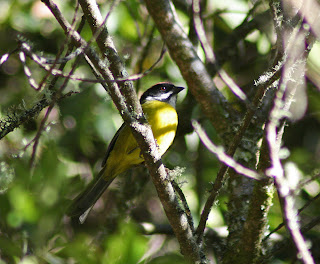 We assumed that the fireworks were over the night before. We were wrong. At 4:00 AM another loud boom shook our room. They really like fireworks in Soata! It was not really a problem, as we needed to get a very early start. Our target bird, Mountain Grackle, is most easily seen before the sun hits the tree tops above Soata.

Mountain Grackle is an extremely range restricted species and it is on the critically endangered list. It was one of our most wanted species for the trip and Oswaldo is one of the best guides in Colombia for finding it. Most locations for them require a long grueling hike. Oswaldo has a location where they can be seen from the road. The bird resembles our Common Grackle, but has a chestnut wing patch and wing lining. It’s also a bit smaller. It’s kind of hard to explain to a non-birder why we were so keen to see grackles!

The drive up the mountain was a bit long and twisting. We passed a girl on horseback that had a pack full of rockets, taking them higher for that evening’s fireworks. We finally got to an area where the grackles are seen regularly. The land was a mix of forest and farm land. We listened and scanned the tree tops, but had no luck. We climbed a bit higher and found Moustached Brush-finches, which we had missed the day before. A few Tyrian Metaltails worked the flowers.

We then heard the unmistakable calling of the grackles. A hand full of birds flew into the tree tops just down the road from us. We rushed over, and caught brief looks. The birds then flew down the hill to where we had been earlier. We jumped back in the car and retraced our steps. We parked where we thought they had flown, but couldn’t find them. Dan and Martin walked quickly down hill, hoping to intercept them. I was lagging behind. I heard some calling and looked up to see several grackles fly into the tree directly above me. I signaled Martin and they hurried back up. We were able to get much better looks and even a couple of really crummy photos!

We drove back up higher, hoping to find some other good birds. We started walking from the area where we had been earlier. A young farmer and two of his sons walked towards us, the boys driving two calves with little sticks. Oswaldo greeted them and told us the farmer owned the land and was working to preserve it for the grackles. He told Oswaldo that his wife would make coffee for us, if we stopped at his house, further up the hill. Dan and I were all for that! Unfortunately when we arrived she was away from the house, so we moved on.

There was some wonderful forest over the pass past the house. We stopped on and off, playing a pygmy owl tape, but really didn’t get much response. We speculated that the warm sun was keeping the birds low. I did see a good number of butterflies at several stream crossings. We returned the way we came and passed the farmer’s house. He and his wife were both at home, so we stopped and happily accepted the coffee. His sons, initially shy, warmed up to us and the youngest even posed for photos. Martin gave the farmer a donation towards preserving the forest. We started back toward town.

There are two other critically endangered species found near Soata, Chestnut-bellied Hummingbird and Niceforo’s Wren. There is a spot near the edge of town where both have been reported, a lovely creek with flowering trees along it. We stopped and very quickly found the hummingbird. The wren, which is extremely secretive, was not calling. As we were scanning we noticed an SUV that drove by a couple of times. The driver finally stopped. He was the mayor and wanted to discuss ecotourism in his town. He was aware of the birds found near town and wanted to see what he could do to promote it. I asked if I could take his photo, and he was not even slightly camera shy!

It was getting a bit late in the afternoon, but we still had some light, so we went to an area with an over-grown creek on the other side of town. We picked our way along a narrow path, listening intently for the Niceforo’s Wren. We dipped on one side, so we took a trail on the other. We still didn’t find the wren, but came across an Apical Flycatcher. Then we spotted a field with trees along one edge that were flowering. We could hear sparring violetears. We climbed up a stony embankment and walked over the trees. I saw a longer-winged hummingbird feeding lower than the violetears. It had a rusty colored tail, a Lazuline Saberwing! We picked out several, though the violetears made it difficult, as they continually harassed them. We also found a couple of Chestnut-bellied Hummingbirds. This made not seeing the wren a little easier.

We trudged back up the hill to the car, hearing, but not seeing, Bicolored Wrens. They had a nest on top of a box on a utility pole. We worked the edge of the scrub, but had only a few common birds, so we packed it up and headed back to the Hotel International for the night, just as the fireworks started again.

Pictures from this day can be seen at :