Day 2, December 7. They Should be called Sparkling VIOLENT Ears! 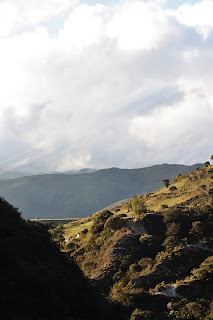 They Should Be Called Sparkling VIOLENT Ears!

We began our day at the delightful private reserve, Rogitama. Located between Bogota and Soata, which was our next destination, this is the best spot to see one of our targets, Black Inca, an endemic hummingbird. Oswaldo had told us several times that the Inca was extremely easy to see. He called it a “pet” at the reserve. Lazuline Saberwing, a near endemic, was supposed to be almost as easy to see. The reserve is known as a great spot for photography. We were really jazzed!

There was a little time before breakfast, so Oswaldo led us into a secluded area of the garden. He showed us the preferred flowers of the Black Inca. The sun was just breaking the horizon and it was a bit chilly. Hummingbirds were already zipping around. In fact it was rather chaotic, with a lot of chasing. We started focusing on the birds, calling out “Sparkling Violetear, another Sparkling Violetear, oh yeah, ANOTHER Sparkling Violetear!” It appeared that every single bird was a Sparkling Violetear. There was no sign of any Black Incas or Lazuline Saberwings. Violetears are very aggressive, and it appeared that they were keeping any other visitors away. Oswaldo said that the Incas were playing the coquette.

We ate a great breakfast of incredible fresh fruit, yogurt and granola and headed back out. We circled the gardens around the house repeatedly. There still were only Violetears. Finally a Black Inca appeared low in a bush in the area we had started birding in earlier. We even were able to get a couple of poor photos. Then a violetear found it and chased it off. That took some pressure off, but we still wanted to see more. We found a couple more Incas, all perched low and inside bushes, limiting photography opportunities. There was no sign of any Saberwings. Oswaldo showed us a porch on the second floor of the building where flowers were on eye level. An occasional Inca fed on the flowers, but the violetears still caused a lot of problems. I was finally able to get a semi-good picture, but still not what I wanted. We also managed a few other species of hummers, Short-tailed Emerald, Speckled Hummingbird and White-bellied Woodstar.

There is a tract of oak forest on the reserve, which we wanted to check out. Our original plan was to drive up, but Roberto, the owner of the preserve, said it was only 500 meters to the forest, and we would see a lot more if we walked. Martin whispered to me that he bet that it would be a heck of lot farther. We started through the fields and I struggled a bit. The ground was uneven and there were fallen logs and branches under tall grass. I am still being overly cautious due to my ankle, so it was slow going. I hated the feeling that I was holding everyone back.

We saw a few birds along the way, a Silvery-throated Spinetail, some Yellow-breasted Brushfinches, Swainson’s Thrush, Tennessee and Blackburnian Warblers and Rose-breasted Grosbeak. It is always fun to see “our” birds in South America . We got excited when we found a patch of seeding bamboo, but there was nothing of note feeding there. Martin was right, as usual. It seemed we had walked a lot farther than 500 meters! Oswaldo called Evar and he picked us up in the van and took us to a field, where we could finally see the forest, which still appeared to be over 500 meters away!

The van had to stay at the gate, so we walked on. We crossed a beautiful little stream. There were some dragonflies, so Martin immediately lost his bird focus and started taking pictures. I was equally preoccupied with some butterflies, puddling on the edge. Dan walked ahead and called out that he thought he had a potoo. There was a dead tree in the pasture and sure enough, at the top of the left fork, we could see a dark form, head pointing up and tail draped down the side of the trunk. He and I went a little closer and scanned. It looked good. We went a little closer, still good. We made the mistake of going still closer and darn if it wasn’t a “feature of the tree”. The moral of this story is “Don’t go closer!”

We had another long drive ahead of us to Soata, so we returned to the house for lunch and packed up. We had a stop scheduled on our way, which I was not exactly ecstatic about, the paramo. If you have read my blogs before, you know that the paramo is the habitat above the tree line. It is invariably cold, rainy and not exactly what you think of with tropical birding. There is a very interesting community of birds there. Martin loves the paramo. I am not as big a fan. I put on some layers, got my raincoat out and tried be cheerful. Actually I am lying. I wasn’t even trying to be cheerful.

As we climbed higher I realized that something was wrong. The sun was out. The temperature was not unpleasant. It wasn’t even windy! What had they done with the paramo? We pulled off the main highway onto a side road. We cruised along searching for blooming flowers. We were looking for hummingbirds. Unfortunately not much was blooming and there was very little activity of any kind. We managed to find a Sedge Wren, some spinetails and a Sierra Finch. I guess the trade off for the good weather was a lack of birds.

The rest of the road to Soata was long and winding. We arrived just at sunset. As we piled our gear in our hotel room, we heard a large booming noise. I looked out the door and saw fireworks to the west. Then there was another boom and saw more fireworks to the east. Soon they were going off all around us. They were marking the beginning of the Christmas season. As we walked to the restaurant for dinner we saw candles being lit all along the street by the people sitting in their door ways and walking along the street. The fireworks continued sporadically.

We ordered our food at a small restaurant. The woman behind the counter had two small girls, maybe four or five years old. They were extremely excited with the all of the festivities going on, going back and forth between the street and the back where their mom was cooking. At one point they both ran in with lit candles. Dan commented “That doesn’t seem like such a good idea!” After dinner when we left we saw the two girls sitting in a doorway with a line of lit candles sitting on a piece of cardboard. Hmmm. Cardboard, lit candles, small children. We speculated if the town would last the night. The fireworks continued until about 11:00 PM. Thank goodness for ear plugs!

The town did not burn down. We actually got some sleep. The next day was a big one. We had three critically endangered birds to seek out.

Pictures from this day.