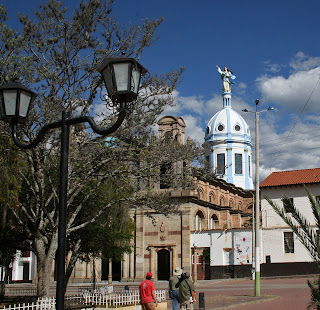 We got up in the dark to get an early start for the Niceforo’s Wren. We figured it would be more likely to respond at first light. I, unfortunately, did not download the song on my iPod, so Oswaldo and Dan went to a great deal of trouble to get it on Dan’s lap top. We got some coffee at a tiny corner shop and headed down hill to the riparian area we had finished at the evening before.

We arrived in a brushy area with fast flowing water where Oswaldo had heard the wren in the past. In fact, there had been in a nest at one time in one of the over hanging trees. We played the call and eventually heard the bird briefly. We worked our way down the creek a little ways, closer to the call. The bird did not seem to be responding to the recording very well. Martin worked his way in even closer and started imitating the call and the bird responded to him! We all finally got at least a brief look, our third critically endangered species in less than 24 hours.

We went back to the area where we had all the hummingbirds the evening before. We had hoped to get some decent photos of the saberwing and the Chestnut-bellied Hummingbird. The hummers were a bit more dispersed, and though we saw both species, they were not hanging around. It was a bit of a steep climb back up, so I decided to start back ahead of everyone. I had also noticed a lot of butterflies as we were working our way down, so I wanted to see if I could get some photos. I was able to get a few decent shots, in spite of the dark conditions. I was just getting to the area where the van was, when Martin, Dan and Oswaldo arrived. We lucked out with the Bicolored Wren, getting much better looks at that wren than we got of the Niceforo’s.

We went back into town for breakfast and to pack up to go back to Bogota . We stopped at a small restaurant. Oswaldo recommended the tamales. Martin and I asked if we should get a couple. Ever, our driver, who could really eat, looked at us like we were nuts. We each ordered one. It was a good thing! The tamale was almost the size of a football. (Well, that’s maybe a slight exaggeration) It came wrapped in banana leaves and was full of all kinds of stuff, garbanzo beans, chicken, pork and who knows what else. I really enjoyed it, though Dan, who is vegetarian, wasn’t crazy about it. We went back to the hotel.

I spent some time outside in the park across from the hotel while waiting for everyone to finish packing. Even here I found some birds, including a Scrub Tanager and the ubiquitous Blue-gray Tanagers. Oswaldo told me he had seen Chestnut-bellied Hummingbirds here in the past, but I had no luck with them. I also took some photos of the town, which I found very charming. The church was particularly lovely.

We were heading back to Bogota for two nights, but we had a stop to make on the way. Outside of the city there is a wonderful wetland, Lago de Fuquene. There was yet another wren, Apolinar’s, a type of marsh wren that we really wanted to see. It’s an endemic, with an very restricted range. I did have this call on my iPod. We pulled up; I played the call and one jumped right out, ready to kick my butt! Unfortunately the reeds were across some water, so I was not able to get a photo. We added a few more species here, Yellow-hooded Blackbird, Spot-flanked Gallinule and Sora. Barn Swallows swarmed over the water. Our list for the day is not long, but we were very happy with what we saw. We got back into Bogota after dark and checked back into the Casona del Patio, where we stayed for two nights. Pablo was meeting us in the morning to continue with us for the rest of the trip.

Photos for this day:

That is a very impressive list of birds you saw. Have a great time and I wish you all teh best in 2010. Happy New Years.