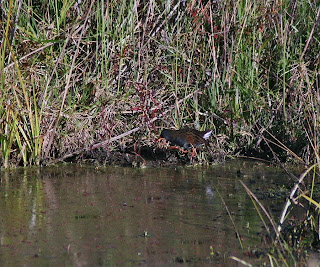 We had a couple of hours early in the morning to finish our Bogota birding. Bogota Rail was our target. Oswaldo had a doctor’s appointment, so we were accompanied by Pablo. Our target that morning was Bogota Rail. Oswaldo had a spot for it near Guasca where he said we couldn’t miss it. (Oh yeah, I’ve heard that before) He had given Pablo directions the evening before. To be honest, we had some trepidation. Rails are always a pain in the neck to see and Pablo was not familiar with the area at all.

We got to the general area and sure enough, the directions were not very clear. We had a very limited time to look. We cruised up and down a gravel road, driving past a very interesting old church with some ruins several times. Pablo called Oswaldo. We still couldn’t find it. We asked a couple of local farmers on the road and they gave us wildly conflicting directions. We were more than a little tense. Finally we stopped a woman driving a donkey cart. She pointed over a hill. It looked like an area that could have some water, so we went through the gate and started up.

Sure enough, there was a beautiful little marsh. Several snipe flushed, a Noble and a couple of Wilson ’s. Then we saw a rail skittering through the grasses. Success! It was brief, but we saw it fairly well. Then we noticed another rail in a different area. And then another! These were very easy to see. They wandered around out in the open, even allowing a few photos. (Mine are pretty poor, but Martin got decent ones. http://www.martinreid.com/Misc%20website/CO09DECBogotaRail.html ) Pablo was stunned by the looks we got. He said he had never seen Bogota Rail anywhere nearly as well as we saw them. Dan and I took a few photos of the nearby church that I mentioned earlier and we took off for the airport.

We had a mid morning flight to Santa Marta which we made in plenty of time. Unfortunately Dan could not continue with us, so Ever took him to the international terminal for his flight back to the states, after dropping us at the domestic terminal. We were very sad to see Dan go. The first part of the trip had been very good, but we were extremely excited for the second section and wished Dan could have shared it with us. Our short flight went well, other than a lack of air conditioning. Maybe this was Avianca Air’s way of acclimating us to the coastal heat.

The landing was spectacular! The run way was parallel to the beach. Brown Pelicans were skimming the surf. The water was cobalt blue. Martin saw a frigate bird. We picked up our luggage and walked outside, where we met our new driver, Jaime. It was obvious we were not in the Andes any more. The heat and humidity was a huge change. Bogota always seemed to be a little gray and misty. Santa Marta was more than sunny. The biggest change was the traffic. I think it’s a requirement that you lay on your horn the entire time you drive. Stop lights and signs seemed to be more of a suggestion than a law. On top of all this, they like traffic circles. It was utter chaos!

We ate a great lunch at an open air restaurant near the airport, and headed east towards Riohacha. We stopped along the way at a restaurant that sat by a river. Pablo had seen hummingbirds in a tree next to the building, but it was not to be this time. We did have a flock of Brown-throated Parakeets. We moved on to a dry scrub forest, where we added Scaled Dove, Northern Scrub Flycatcher, Black-crested Antshrike and White-fringed Antwren. We got into Riohacha right after dusk. Our hotel was a block from the beach with a great view of the Caribbean. I was also excited to actually get to buy something! Two indigenous women were sitting on the steps of the hotel making traditional bags. I did a little bartering (very little actually) and got a bag that I adore!

Photos from the day: