Colombia, The Only Risk is Wanting to Stay 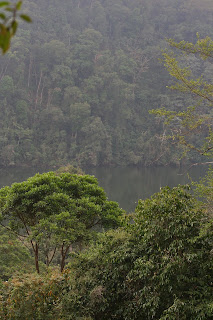 Martin and I returned for two weeks of birding in Colombia , joined by our good friend Dan Peak for the first part of the trip. We spent 5 days in the area surrounding Bogota and then flew to the Santa Marta region on the Caribbean coast for the remainder of our time. Our emphasis was on quality vs. quantity, concentrating on endemic and near endemic species. We had an extremely successful trip, thanks to our incredible guides, Oswaldo Cortez and Pablo Florez. Pablo had guided us on our great trip in August, and made all of our arrangements. The title of this report is the new slogan for Colombia ’s tourism agency. I found it absolutely true.

We arrived in Bogota late on December 5, so our birding began early on December 6. Our guide, Oswaldo Cortez, met us before 5:00 AM at our hotel, Casona del Patio. We were delighted to see that our driver was Evar, who had driven us in Bogota on our previous trip. We packed up quickly and headed to Laguna Pedropalo, in the Eastern Andes, north of Bogota . This is one of the best sites to see Turquiose Dacnis. There is a reserve, but all of the birds found can be found along the road, where it is easy to walk.

One of the many things that I find charming about Colombia is that many people walk for fun. It’s not unusual to see families strolling together on quiet country roads on weekend. This can be a bit of a negative when birding, due to conversation, but I am so happy to see families together that it’s easy to tolerate. Being a Sunday, there were quite a few people. Despite this, we did manage to see quite a few birds. One of the first life birds I got here was an Indigo-capped Hummingbird. We also scored on Short-tailed Emerald. A Yellow-backed Oriole sang incessantly. We scanned the lake, which was visible from the road, but only saw a couple of Pied-billed Grebes.

We worked our way up the road, driving a bit, then birding, and then driving a bit more. We reached an area where we stood above the trees. We were all looking in different directions, when Martin called out “Male Turquoise Dacnis! He was trying to get it in the scope, as I ran over. Unfortunately the bird flew. We spent quite a long time searching both the tree it was in, and a group of trees in the direction it had flown. Despite playing a tape of its song we never re-found the bird. Needless to say, we were a bit disappointed.

We started working our way back down the road, when a middle aged lady and three young girls, possibly her grand daughters, passed us. The woman turned back to talk, asking us where we were from and what we were looking for. She spoke some English and we limped along with our limited Spanish. (I should say MY extremely limited Spanish. Martin does pretty well) She surprised us all by insisting that we accompany her and the girls to her finca (farm) for coffee. It was very close, just around the corner. Dan and I were both jonesing for caffeine, so we were delighted to take her up on it. The coffee was incredibly good. Martin doesn’t drink coffee, so she had her kitchen girl make him a glass of fresh blackberry juice, known as mora. This was the first of many times on this trip that we were deeply impressed by the open friendliness of the Colombian people.

One of the downsides of birding near Bogota , is that the birding locations can be quite distant from each other. This area of Colombia is very developed, with excellent roads and a very “civilized” country-side. The farms would look in place in any green, hilly area of the United States . Patches of forest are widely separated. We had a long drive to our next location, Rogitama Reserve, so we took off shortly after noon for the long drive. We arrived right at sunset. After a wonderful dinner, Oswaldo took us out to look for White-throated Screech Owl. Unfortunately we did not have a proper spot light and Martin’s flashlight was not able to pick out the bird, though we did hear it calling quite close. More about Rogitama and its famous "pet", the Black Inca.

Here is a link to my photos:

Here is our bird list for the day:
1 Pied-billed Grebe