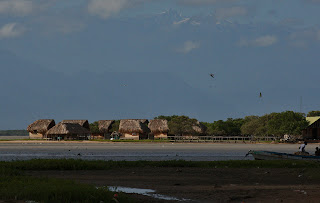 I hope you will excuse the delay in my writing this blog. Between the holiday and chasing a couple of amazingly good birds, I got behind. Oh well, its not like I was writing in real time, anyway.

Our birding began early, as usual on December 13. We had arranged to meet Dijohnnes at the Los Flamecos Sanctuary. We parked at the spot where we had seen the Vermilion Cardinal the evening before, secretly hoping he would still be sitting there. Unfortunately he wasn't. Dijohnnes' brother and sister arrived on a bicycle and Dijohnnes pulled up on his shortly after. His younger siblings were a little shy, but did agree to a couple of photos, though making them smile was not easy! Dijohnnes parked his bike and we took off through the scrub. Our main targer that morning was Chestnut Piculet, a tiny member of the woodpecker family.

I had seen one the day before, but Martin had missed it. This was not a good thing! Martin really wanted this bird badly. Its always uncomfortable for one person to get a bird and the other to miss it. I almost felt badly that I had seen it. (Almost!) We had not walked a great distance when Pablo spotted a piculet. We scrambled to all get a look. It took some ducking under bushes and avoiding thorns, but we finally got a great look. I even got a few lousy photos! It made me feel much better that Martin had caught up. We saw many of the same birds we had seen the day before, but didn't repeat on the cardinal. I particularly enjoyed the hummingbirds. The Buffy Hummingbird isn't flashy, but it was still attractive and it let me photograph it, so that was nice!

We went to the restaurant on the beach again for breakfast. While they were preparing it, we birded around the area. One of the first birds we added to the list was another grackle, Caribe Grackle. This one isn't as endangered as the Mountain, nor as range restricted (and pretty) as the Red-bellied, which we had seen on our previous trip, but it was still a welcome addition. It was also interesting to contrast it with its larger cousin, the Great-tailed Grackle, which we also have in Texas. An Orinoco Saltator put on a great show. I enjoyed the Russet-throated Puffbird and the Yellow Oriole again. This little beach area could be addicting.

After breakfast we walked down a dirt road to a lagoon behind the village. Laughing Gulls were loafing, along with a number of terns. A larger first winter gull came in. It appeared to be the Lesser Black-back I had found the day before. Pablo was really excited, as it was a life bird for him. He had missed the bird the day before, as he was arranging for Dijohnned to guide us when it had appeared. It was a nice change to show Pablo a life bird, instead of him showing us! We picked up some more shorebirds and enjoyed the view of the Santa Marta mountains again, knowing we would be heading up very soon. We worked the scrub a bit more, still not seeing the cardinal.

We returned to the river where Martin had seen the Glaucous Tanager the day before. I was hoping it was now my turn to play catch up, but it didn't happen. We did have several warblers, including a Blackpoll and several Prothonataries. The butterflies were absolutely thick. Most of them were White-peacocks, which are fairly common in south Texas, but there were a few others. We thought we had a Greater Ani. It looked large when it was deep in the trees, but when it came out it proved to be another Smooth-billed. We had a long drive ahead of us and we wanted to do some birding along the road, so we big farewell to Dijohnnes and headed west.

We had stopped at a restaurant along the road when we had driven to Riohacha two days prior. Pablo said this was a good spot for hummingbirds and possibly the Glaucous Tanager. That day it was a little late, so the birding was slow. We decided to have lunch there and see what we could find. We ordered and started working the trees in the yard, looking for something interesting. I picked up a life bird almost immediately, Red-legged Honeycreeper. This was, as Martin puts it, a "tart's tick", a British birder expression for a bird you should have gotten a long time ago. There wasn't much else there, so I wandered down to the river edge. I heard a huge splashing and looked down to see a very large lizard scampering across the river. It wasn't until he got across I realized he was not wading, but actually running on the water! It was a Basilisk. sometimes called a Jesus Christ Lizard, because of its ability to walk on water. It was laying on the opposite bank and I tried very hard to get a good photo, as it was a great looking animal. It had a big crest and a ridge down its back. It would open its mouth, and stick out its tongue. I was really impressed, but the light was really bad and he was too far away for the flash to do much good, so the pictures are very sucky. I was able to photograph the most amazing squirrel I have ever seen. It was red. Now, I know, we have Red Squirrels here in Texas, but they are just kind of rusty. This guy was RED. I mean really red!

Our next stop was Minca, a town above Santa Marta where the locals went to get away from the coastal heat. The elevation isn't really that high, but its enough to provide some relief. Its a charming little town, with some good accomadations. Our hotel sat on the Minca river, with rocky rapids right below the dining area. The lodge was decorated with some really unusual local art work, including some wonderful carvings of birds. The food was great, as usual. The beds were good. We were really happy! We went to sleep thinking of those snow capped peaks we were heading up into the following morning.
Photos for the day:
http://www.flickr.com/photos/sngcanary/sets/72157623142180242/