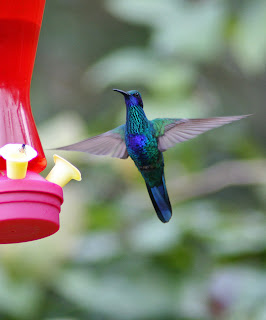 We had one more morning at El Dorado before heading to Santa Marta for our last night in the Caribbean area. It was hard to think of leaving. Usually on these trips I am ready to go home, especially after a two week trip. This time I think I would have preferred making El Dorado home and going to San Antonio to visit. I realized I was really going to miss the birds, the view, the food, everything. The night before we had heard some very interesting news. Montero, the ranger that lived at the lodge, had started feeding the Santa Marta Antpittas worms! This is something that is going on all over the tropics. Angel Paz in Ecuador was the one who started this. Angel has three species of antpittas that come in for worms on a daily basis. (We visited Angel on my first visit to Ecuador.) This was really exciting! We would be able to see this darn Santa Marta Antpitta after all! Montero said to meet him at 7:00AM. We hung around anxiously waiting. Martin and I worried that he had snuck off without us. Finally Montero came out and we walked down the trail to where he puts the worms. He instructed us to wait to the side, so the antpitta would come in. He said she would come down between 7AM and 730AM. He put out the worms, whistled the "Bob-white" like call of the antpitta and went off to do his work. We waited quietly. And we waited. After about 20 minutes Pablo played the call on his iPod. We waited some more. After about 45 minutes we decided she wasn't coming in any time soon. It was extremely disappointing.

We decided to repeat what we had done the day before, going down to the tiende and then back up to the research station, though spending more abbreviated times at each place. The tiende was fairly active. We had a number of hummingbirds, including a nice female Blossomcrown. Santa Marta Woodstar made a good showing. We had brilliant looks at a Masked Trogan. There were several White-lored Warblers. I saw something I had never seen before, a Tennessee Warbler feeding on bananas. The Blue-naped Chlorophonias and Bay-headed Tanagers joined him. While savoring a small cup of the sweet coffee that the tiende served, we heard a familar call, "Quick three beers!" and spotted an Olive-sided Flycatcher. Unfortunately we had to cut our time there short. We hustled up to research station, hoping for one more chance for the antpitta. Pablo said there was a trail where the antpittas were seen regularly, running back and forth across the trail. I was a little worried about the steepness, as my ankle was bothering me quite a bit, but I decided to try. We worked our way down. It was a repeat of our other visits. The antpitta came in close, called like crazy and then moved off with us not seeing a feather. I have absolutely nothing good to say about the Santa Marta Antpitta!