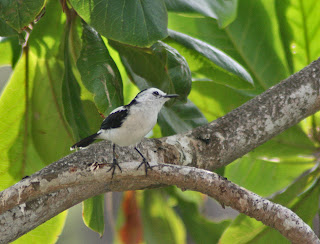 The last day of a birding trip is always difficult. I always feel a little sad. On this trip I felt more than a little sad. We had a flight from Barranquilla to Bogota at 1PM. The drive from Santa Marta was going to be the last opportunity to bird. Luckily this is a really good road for that. We got up at 500AM and drug all of our stuff downstairs at the hotel. Our first target bird, Chestnut-winged Chachalaca, was best gotten at dawn. We sat and waited for Jaime, our driver. He was late. Pablo called him, and he said he would be right there. We suspected that he had overslept. (I was a little bit sympathetic. It had been an exhausting trip) He made good on the promise and showed up shortly after. We jumped in the car and headed east, towards the long thin barrier islands between Santa Marta and Baranquilla.

The sun was rising and we were driving out of Santa Marta. We were all scanning the scrubby trees along the road, looking for the silhouette of a chachalaca. We were a little worried that it might be too late, when we saw a flock right next to the highway. We jumped out the car, which was a little un-nerving, as the traffic was fast and heavy. The birds were a bit shy, but we got very good looks. There were more birds to try for, so we took off. I could almost feel time ticking by. We turned onto the highway that goes to Baranquilla. The landscape quickly changed from desert scrub to mangroves and salt flats. The Caribbean was on one side of the road and on the other a huge estuary formed by the delta of the Magdelena River. We padded our trip list with shorebirds and egrets and herons.

We stopped at a truck stop for a quick breakfast. There was an open porch with a balcony overlooking a little barn yard with peacocks. Hanging on the wall was a small cage holding a Tropical Mockingbird. I asked Pablo if that was legal and he said no, but that the law isn't enforced. There was also a very large walk in cage with an Orange-winged Amazon. These were not exactly the birds we were looking for, but it ended up that it was a good stop. I spotted a Pied-water Tyrant in a tree right next to the balcony. He posed for a couple of photos. Then another black and white bird flew in, a gorgeous Fork-tailed Flycatcher. Its a bird I have seen many times, even a couple of times in Texas, but it was still nice to see him.

We left and drove to Isla Salamanca National Park to look for the last few birds. One of our main targets appeared right next to the road, a male Bicolored Conebill. The gate to the park was closed, so Pablo flagged down a worker behind the wall. There is a charge for admission, but Pablo explained that we had a very short time. They were nice enough to let us bird for about an hour without paying the admission. Again, Martin and I were struck by the graciousness of the Colombians that we encountered. We walked in and I heard a call that I thought I recognized, a Greater Ani. I said something to Martin, but he thought it was something else, so we moved on. We were looking for flowering trees, where Sapphire-throated and Sapphire-bellied Hummingbirds feed. Unfortunately we never found them. We did have a Panama Flycatcher, which was new for me. We needed to leave to make our flight, so we started back to the car. Pablo was walking ahead of us and called out "Greater Ani!" It was exactly where I had heard the call. Hmmm. I was very happy to get this, as it was my last Ani. Yeah, I know, there are only three of them, but its still nice to complete a group.

We drove into Baranquilla, which I found less than impressive. This area has more poverty than we had seen anywhere else in Colombia. The condition of the animals was much worse than other places, which I think is telling. There are many shanties. A large bridge crosses the Magdelana, a huge river. There is heavy industry all around this area. The sky line is packed with large buildings. We didn't get into this area, so I can't really comment on the downtown area. We arrived at the airport, which was a little chaotic. Pablo was returning to Medallin, where he lives and we were going to Bogota, where our flight home would depart from the following day. As we sat waiting for our flights we talked a bit about doing a trip to the Magdelena Valley sometime in the future. We said our goodbyes and hopefully "see you later"s and boarded our flight. We arrived in Bogota, where we returned to our previous hotel, Casona del Patio. We ate pizza in bed and reveled over our long trip list, 385 species. We were very successful, particularly with endemics. Obviously we were very happy. I am posting two lists, first the day list, then our trip list.

I apologize for how many postings I have done on this trip, but it was a long trip! If you have read these I imagine you think the posts went on longer than the trip! I hope you have enjoyed reading them. My last word is GO SOMEPLACE! Its easier than you think and it will change your life forever.

Thanks so much for making all these posts on your trip! The more I read about Colombia, the more intrigued and excited I am about actually going there. I'll be doing a language program for a few weeks there, but will also go birding quite a bit too.