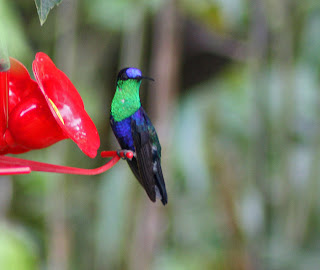 I don't think I ever enjoyed looking out the back door more in my life on waking up. Santa Marta was stretched out 7,000 feet below us. The stars were blazing in the pre-dawn sky. At that point I didn't care if I ever saw another bird. (that is such a lie!) The electricity was still out, so we dressed by candlelight and went up to the main building for breakfast. We could hear Band-tailed Guans calling all around us. It was starting to get light as we walked up to the lodge and the hummingbirds were already battling.

Our original plan had been to go up the mountain to the summit, where there are some radio towers, but there had been a little mix up concerning drivers. We were staying at El Dorado for four nights. We had expected to use their driver and car, but they were short on gasoline. Pablo had arranged for our driver Jaimie to come back on our second full day for the rest of the stay, but on this day we were going to be on foot. With all that was around the lodge, I was happy. After breakfast we decided to walk a trail near the lodge, looking for White-tipped Quetzal. The trail was quiet, we headed back down to the lodge. This was a good move, as there were Stripe-headed Brush-finch on the compost pile, where we had seen the Black-fronted Wood-quail the evening before. Martin spotted a Santa Marta Woodstar on one of the bushes in front of our cabin. I had missed it the evening before. Woodstars are tiny hummingbirds which mimic bumble bees in their flight and sound. This way they can sneak in "under the radar", avoiding a lot of the aggression of the other hummers. Its a lot of fun to watch them fly in very slowly, stopping and starting, buzzing just like a big bee. I imagine them saying "Don't bother about me, I am just a bumble bee. No worries from me".

Pablo suggested we walk the road up hill, so we started out. We hadn't gone fare when we hitched a ride with a driver going up to the radio towers with a worker. There is a research station about half way between the lodge and the towers. Before the lodge opened this is where birders stayed. Its part of a national park and has accomadation which are basic, but adequate. There are gorgeous gardens and the view is even better, if that's possible, than at El Dorado! The driver dropped us off and we went looking for Santa Marta Antpitta. This turned out to be an excercise in frustration. There is a trail behind the building and one was calling less than 20 feet away in the bushes. Pablo played the call back and the bird came a little closer. We worked and worked to see it, but with no luck. We never even saw the tiniest movement. Then it decided to move off. No worries. It was just one bird. All of the trip reports from this area say things like "As usual, the Santa Marta Antpitta was easy".

The Santa Marta Mountain-tanagers more than made up for the antpitta, as far as I was concerned. They resemble Lacrimose Mountain-tanagers, which I have always liked a lot. We got good looks at the tanagers as they worked some bushes almost on eye level. Santa Marta Brush-finches were also around, and even though we had seen them well the day before, I enjoyed them. We added a new warbler, Golden-crowned Whitestart. He was pretty cooperative, even allowing me to take a not great, but recognizable photo. A Black-and-Chestnut Eagle soared over and a flock of Santa Marta Parakeets flew by. As it warmed up a bit butterflies starting flying, and I got a few pictures. I am still working on the IDs and probably will be for some time.

After an hour the driver we hitched with came back down, so we jumped back in and headed to the lodge. We birded the surrounding area until lunch. I had a great time at the hummingbird feeders, practicing photographing them. I decided after looking at my pictures that I need a lot more practice! I particularly liked the Violet-crowned Woodnymphs. They are very common, but the color on the male's gorget is the most spectacular green. I never got tired of it! Blue-naped Chlorphonias also gave my camera a work out. I found it difficult to not continue shooting pictures of them. The make our Painted Buntings look almost dull. After lunch we walked another trail near the lodge, where we easily picked up Rusty-headed Spinetail. Again, we heard Santa Marta Antpitta, which kind of reminded me of a Bobwhite. Again it was really close. Again we didn't see it. What we did see were two White-tipped Quetzals! The male came in first, followed by a female. Any day with a quetzal is a good day. We were also very happy to find out we had electricity again. Unfortunately the water had not heated up much when we took showers, but there are worse things.

The Band-tailed Guans came into the tree across the road at sunset. Crested Oropendalas were calling. Black-headed Thrush were singing and popping up in the fruting tree next to the lodge. After dinner we tried again for the Santa Marta Screech-owl. We heard it calling close by, but it never flew in. I couldn't help but think he was conspiring with the antpitta. It had been a great day and I was very ready for a good nights sleep. Martin spent some time on our balcony enjoying the incredible stars. I got out the novel I was reading and maybe got through two pages before I was asleep.