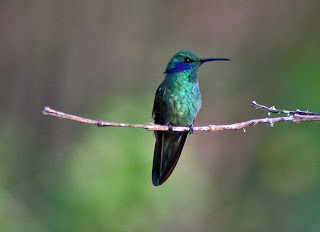 This trip seem to be building to a crescendo. I loved every place we went more than the last. This day everything peaked and to be honest, it pretty much stayed at that peak. We started birding in Minca, just above our hotel. The roads were forested and very easy to bird. We began looking for Rosy-thrush Tanager. Pablo had a spot and sure enough, when he played the tape, they responded immediately. Unfortunately they only called. Despite hearing them very closely, then never showed their beautiful faces. I think they must have taken lessons from the antpittas. We did find Golden-winged Sparrows in the vincinity, which made up for it. They are very flashy for sparrows. We saw our first American Redstarts of the trip, along with the ubiquitous Blackburnians. Several Rose-breasted Grosbeaks were around. Grey-breasted Woodwrens were singing. It was a very pleasant morning. We got to a side road that leads to a beautiful spot on a small river, where there is a swimming hole called Pozo Azul. An old covered bridge crossed the river. It was almost like being back in Pennsylvania. Pablo said he had seen Otters on this stretch of water, but that wasn't to be for us. There was something even more exciting. Martin crossed the bridge and spotted a large hummingbird working low in the flowers. It was a bird that we had wanted very badly, but were not at all confident that we would see, a Santa Marta Sabrewing. Pablo had told us this species had been seen on this road before, but it had seemed too good to be true. We were thrilled to say the least, as this is a very difficult bird to find.

We returned to the lodge for our gear and started the climb up to El Dorado. We went back to Pozo Azul, but there was no sign of the Sabrewing. We worked our way up the road and saw some wonderful birds. There was a Black-backed Antshrike very close and confiding. A King Vulture flew over, which is one of my favorite birds. A Cinnamon Becard was right over our heads. We came to a small tiende (store) where they had planted incredible hummingbird gardens. This is a well known spot that birders stop at on their way up to the lodge. We bought a couple of cokes and I had a cup of their sweet strong coffee. There were many blackberry bushes and a few coffee plants. It looked very promising, but as we had run into before, there was a glut of Green Violetears. They were being very aggressive. A banana feeder was next to the store, which had several Blue-naped Chlorophonias, a bird I had missed on our last trip. They are unbelievably colorful! I was very excited to get a few photos.

We spread out a little bit. I was still standing near the banana feeder when I saw a hummingbird that was not a violetear. I saw the bright crown and realized it was one of our main targets, a male Blossomcrown. I called out and Martin ran over. Unfortunately the Violetears flew in faster than Martin could get there and chased it away. This was not good. Martin really wanted this bird. There were two hummingbirds that were on the very top of his list, Black-backed Thornbill and Blossomcrown. We looked and looked and couldn't re-find it. I felt terrible and I am sure Martin felt even worse. I found myself thinking that I wish I had not seen it. (Well, I sort of felt that way.) Pablo told Martin he knew a trail where they were sometimes seen, so we headed off. The trail was up nearer to the lodge. Its called the Mora (blackberry) trail. The Blossomcrowns like blackberry flowers. The trail was rather steep, so I stayed below, as I didn't want to slow them down. I photographed some butterflies while they searched, which satisfied me. They returned not having seen the hummingbird, so we proceeded to the lodge.

We pulled up to a very nice wooden building. Inside the walls are lined with windows. There is a lovely dining room and little store with crafts made my local woman. This building overlooks the cabins. Montero, the ranger who lives on site greeted us. We walked down a long outside stone stair case to a path leading down to our cabin. Hummingbird feeders were everywhere, as were flowering bushes. The view was the most spectacular I had ever seen! We were at about 7000 ft and you could see Santa Marta and the Caribbean down below us. A thin peninsula stretched out to the west, leading to Baranquilla. We were compleletly blown away! The hummingbird feeders were swarming with great birds. One big surprise was White-tailed Starfrontlets. The trip reports we had read had not mentioned the feeders. Violet-crowned Woodnymphs were common. Unfortunately the Green Violetears also liked this area, so there were a few conflicts. Santa Marta Brush finches came in to some bananas on a feeder, soon joined by more Blue-naped Chlorophonias.

We unloaded our gear in the cabin, which was beautiful. One wall was all glass, with sliding doors to a balcony. The view from the balcony of Santa Marta was gorgeous during the day, and enough to make you cry at night, with the stars blazing above and the lights of Santa Marta twinkling below. In the distance we could see the glow of the city lights of Baranquilla. It is impossible to describe how enchanting this place was! The beds were really comfortable with wonderful linens. I know its a cliche, but I felt like I was in heaven. I could move into this place and stay forever. Darn, I wish I was there right now! There was one negative, the power was out. The lines that run to the lodge and to the research station farther up the mountain, are a bit tenuous. This place was so fabulous, we really didn't care. The cook gave us candles and matches. All was well!

We went back outside and worked through all the hummingbirds. The cook came out and told us to check the compost pile. Black-fronted Wood-quail were having their supper! Wood-quail are notoriously difficult to see. We quietly walked over and stood and watched the Wood-quail for about 15 minutes. I got some really crummy photos, but any photos of them are fabulous! Santa Marta Stripe-headed Brush-finch also came in. The hummingbird feeders were still very active. Band-tailed Guans flew into a tree across the road. We heard a Golden-breasted Fruit-eater calling. Finally the sun started sinking and we witnessed one of the most beautiful sunsets that I have ever seen. We went in to the main building for an excellent candle-light dinner. We met two delightful young women staying at the lodge, one Colombian, on German, who were there banding birds. After dinner we went outside to try to find a Santa Marta Screech-owl. We heard a couple calling close to the lodge, but never actually saw one. This was a small dissappointment, but it did not dim the glow of a wonderful day. I couldn't wait for morning!