The Dominican Republic, Day 1 and 2, a Trip of Firsts 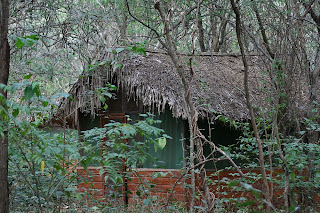 Dear all,
I returned yesterday from a week long trip to the Dominican Republic. My bird reports will be briefer than my usual ones as I only spent three days seriously birding. Despite the brief time I did extremely well, getting 21 endemics and 41 life birds, including a couple of heard only birds. I really loved the DR and enjoyed my entire trip. I will be very happy to share any and all information that I have.

I titled this a trip of firsts for several reasons. Of course there were the birds that I saw for the first time, but all of my birding trips have those, hopefully. The big firsts are that this is the first time I have done an international trip totally alone. It was also my first trip to the Caribbean. Martin and I had been talking about going to the Dominican Republic for over a year. As most of you know, I am a corporate travel agent. I was lucky enough to win a set of tickets on American Airlines good for the Caribbean in a contest at work. In December when I was able to get vacation dates we set up our flights. Then a couple of serious things happened. On January 12 Haiti suffered the catastrophic earthquake. We did some research and found that the DR was not effected. We decided that we wanted to cut back on our expenses and do a simpler trip, donating what we would save to Doctor's Without Borders. Then Martin had to back out due to work issues. My initial reaction was to completely cancel. After mulling it over and talking to one of the clients I deal with at work who is from Santo Domingo, I decided to do the trip on my own. Needless to say it was a little scary, but also exhilarating!

I did not want to drive on my own, as I knew that traffic can be brutal in Latin America and traffic laws are more suggestions that anything else. I contacted Kate Wallace, a former Peace Corps worker, now doing bird tours and arranged for her to guide me for 3 days. I modified the hotel arrangements that I had done for Barahona in the SW and Samana in the NE. I was going to stay in Santa Domingo for the other 4 days and just do tourist stuff. I packed my bags, tried to learn Spanish in a week and kept telling myself that I wasn't crazy to do this.

I arrived in Santo Domingo on February 13. I was totally blown away by the spectacular coast line when we landed. The water was the most delectible shade of turquoise blue. Kate arranged for a driver, Mike, to pick me up at the airport and take me to my hotel, the Mercure, in the Zona Colonia in Santo Domingo. On the drive to the hotel Mike entertained me with stories of life in Santo Domingo. He speaks excellent English, having lived in New York for a number of years. I was constantly scanning the sky on the drive in for gulls, terns, frigatebirds, or any other water birds. I was a bit surprised that I didn't see a single bird of any kind! The road skirts the shoreline, and despite the lack of birds, I enjoyed the beauty.

We arrived at the Mercure and Mike gave me his mobile number, in case I wanted to do a tour later that day, or anything on my days after Kate and I went birding. The Mercure sits on the corner of El Conde and Hostos, just down from Parque Colon. Its a lovely small French hotel with a restaurant and bar. I checked into my room and immediately went wandering. Hispaniolan Parakeets were roosting about a block away. Antillean Palm Swifts swooped by over head constantly, giving me my first two life birds. After checking out the park and some of the shops, I returned to the hotel for a dinner of lambi (conch) and a glass of white wine.

Kate picked me up at 7:30 AM and we headed to the Botanical Gardens. This is an excellent birding spot. If you ever do a cruise and Santo Domingo is a port of call, its a great place to pick up some local birds. Almost immediatly after walking in we saw Hispaniolan Woodpecker. I had been concerned that I would miss this bird. Boy, was I wrong! They were very common every place we went! We heard the incessant song of Black-whiskered Vireos all through the garden. I assured Kate that we didn't have to spend any time trying to see them, as I had seen them both in Florida and Texas. Hispaniolan Lizard Cuckoos were in several places and easy to see, but hard to photograph. We quickly picked up both hummingbirds found in the gardens, Antillean Mango and Vervain Hummingbird. The Vervain is not much of a looker, but charming none-the-less, being the second smallest bird in the world.

Palmchats were common. This is a very interesting bird. Its the national bird of the Dominican Republic. It is the only member of its genus and family, endemic to Hispaniola, not being found anywhere else in the world. They build an "apartment" type nest of twigs in palm trees, with each family having its own entrance. The nests are used year round, not just for breeding. The birds seem to constantly be doing improvements. It was fun to watch them carrying sticks three or four times their length to the nest site.

We were unsuccessful in finding West Indian Whistling Duck, one of our main targets, so I decided I would come back later in the week. After a stop for coffee and a pastry, we headed to Kate's camp in the south-western part of the country. The drive out there was really interesting. Kate has lived in the DR since her days in the Peace Corps. She shared her perspective on the culture along with a good dose of local history. We passed through a number of small towns and villages. Kate educated me on the agricultural going ons and gave me a good over view of what was being done in the country to educate the people on environmental issues. I enjoyed talking to her tremendously!

We arrived at her camp mid afternoon and almost immediately we found a Broad-billed Tody. I am not terribly fond of the word cute, but this bird forced me to use it! We soon heard a Narrow-billed Tody, which is even cuter, if thats possible. Her camp is one of the few places where both species can be found. I took my things to the screened shelter that would be my home for the next two nights and took a quick cold shower. The camp is primitive, but very comfortable. I would have been happy staying there for the entire week. There is a free standing bathroom with flush toilets. The showers are cold, but its hot outside, so they felt good. You can also bathe in a spring fed canal, but I didn't bring my bathing suit. I don't think skinny dipping is an option!

We walked the road by the camp and found a gorgeous Key West Quail Dove. A pond had Least Grebes with chicks and Common Moorhens. White-necked Crows made an incessant racket. Probably the biggest surprise for me was an Antillean Siskin. I was more than delighted to see several male Black-throated Blue Warblers, a rarity in Texas. Bananaquits were "trash birds". We had a nice dinner of chicken, rice and pigeon peas and salad, washed down with copious amounts of Presidente beer. Kate told me we would be leaving at 5:00 AM sharp in order to get up into the mountains for our targets in the morning. I was more than ready to hit my cot!