Dear all,
after I returned to Santo Domingo my birding was limited to a half day at the Botanical Gardens. (I know its hard to believe that I spent several days doing normal sight seeing!) I was more than happy to return to the gardens. I got Michael, the driver who picked me up at the airport, to pick me up at the hotel early. The gardens normally charge admission, and don't formally open until 9:00 AM, but they let birders and walkers in early for free. What a great concept! I asked Michael to return at noon and took off down the path. Kate and I had spent a little over two hours here and I was looking forward to staying even longer.

The gardens are really beautiful, with a great mix of natural habitat and some manicured areas. I tried to remember the trail Kate and I took, but got it wrong, big surprise there! Luckily it was still a good area. I found a Bananaquit singing loudly. This is one of the most common birds in Santo Domingo, but I still enjoyed the opportunity to see it in full song and caught a couple of ok photos. The Hispaniolan Lizard-cuckoos were very entertaining. I also was very happy to see both the Antillean Mangos and the Vervain Hummingbirds. The Vervains are so tiny, the second smallest bird in the world. Unfortunately they are also boogers to photograph!

My main target this day was West Indian Whistling Duck. This is one of the rarest ducks in the Americas. They have been badly effected by hunting, habitat loss and predation by introduced mongoose and rats. We had looked for them unsuccessfully on my first visit. I finally found the La Canada area, where Kate has showed me the stream where they are usually found. She had mentioned a park worker who always seemed to know where they were. I slowly walked the trail along the creek, searching along the banks and in the water. I saw the Least Grebe family, an adult with four downy stripey chicks. I also kept my open for a Limpkin, which is usually in the same area. I was almost to the end of the creek, with no success, when I saw a park worker sweeping the trail with a huge palm frond. I stopped and asked him in my extremely bad Spanish about the ducks. I consider it almost a miracle that he understood me, as my request involved a lot of jestures and me quacking. (seriously, I am not kidding!) After he quit laughing he took me back up the way I had come.

We stopped at a small dam, where I finally got my Limpkin. He said that the ducks nest in this area, at least I think thats what he said, as he mentioned huevos. (Or maybe he was asking me to breakfast.) Any way, I told him I would hang around that area and see if one came in. He pointed up, letting me know I needed to check the trees, as well. Whistling Ducks used to be called Tree Ducks, so they are many times perched up above. I slipped him a tip for his help and settled in to wait. He walked back down the hill to finish his sweeping. He was just out of sight when I heard him clapping. I turned around and he was coming up the hill, motioning for me to come. I ran down the hill and he pointed to a dark area, across the creek. There, almost invisible on the dark bank, sat the duck! It was a beautiful thing, so well camouflaged I had probably walked right by it. I took a few pictures, but they are a little dark. I was still extremely happy! On my way back up the bank I found a neat lizard, a Large-headed Anole.

I felt a lot more relaxed after seeing the duck. I wasn't going to get any new birds, but I was hoping to pick up some butterflies. I worked the trail back up to an area where we had seen a lot of bugs before. I did see a number of warblers: Ovenbird, Cape May Warbler, Northern Waterthrush and a beautiful male Prairie Warbler. Its always fun to see "our" spring birds in their winter habitat. I came to the Japanese Gardens, one of the more manicured areas. I wanted to check for dragonflies, so I walked down to the small lake. I found a couple of bugs, Spot-tailed Dasher and Thorn-bush Dasher, both of which I see in Texas. Calista butterflies were thick. Calistas are a group only found in the Caribbean. There are forty five species and they all look alike. I did photograph a few, but I started going crosseyed trying to figure out if they were all the same species, or different. Gray Kingbirds were twittering around the pond. A couple of really flashy butterflies flew through, but only gave teasing looks. I walked back to the entrance through an area of large old trees. A Red-legged Thrush hopped along on the ground, reminding me of an American Robin, but with a bit more flash. Michael was waiting for me when I got to the gate.

I really like these gardens! If you happen to be in Santo Domingo they are well worth a morning, even if you are not a birder. They are beautifully maintained and very relaxing. There is a little train that runs through; I saw large groups of school children on them. I recommend skipping that and just walking. If you are a birder you can pick up a number of good birds here.  I really enjoyed the Dominican Republic. I would highly recommend it. If you have any questions please feel free to email me. Now, on to Peru! (I hope) 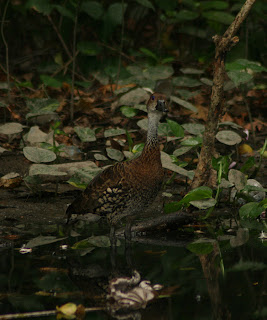