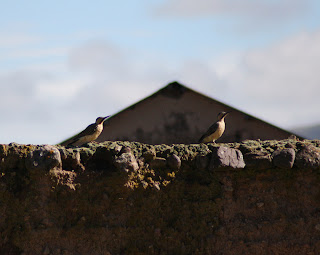 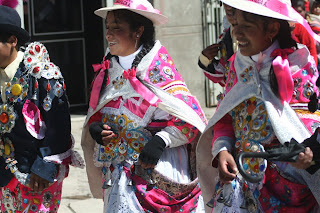 Well, here is yet another series of blogs on my birding travels. If you have no interest please forgive me for sending this to you. I am always hesitant, but people do tell me they enjoy reading them.

This was our first trip to Peru, and perhaps will be our last big trip, at least for a while. Initially we had thought we would go for about 10 days. Then it started to expand, first to two weeks, then to three and a half weeks, then back down to just under three weeks. We made our arrangements through Gunnar Engblom with Kolibri Expeditions. It was a first for me, in that we were joining a tour group for part of the trip. In the past we had either traveled by ourselves, or with one or two close friends. The group was rather "organic", in that people came and went. I really liked that Gunnar was flexible and we were able to adjust what we were doing according to the birds we wanted to see.

We arrived in Lima late in the evening on May 1. Our first driver, Henry, met us at the airport. We piled our stuff into the van and took off for Lake Junin, where we were meeting the group, which had already started their tour. Lima is at sea level and Lake Junin is at over 13,000 feet, so this would be a huge adjustment. Altitude sickness is a real risk at that level. Gunnar suggested we drive as far as San Mateo, which is about 10, 000 ft and sleep for a couple of hours in the van, and then proceed to the lake. This would help acclimate us. I was able to sleep pretty well, even while driving. I did occasionally wake, sometimes to snow capped peaks looming over us, lit by the partial moon. I know it sounds trite, but this drive had a truly dream like quality.

We arrived at Junin at about 8:00 AM. Henry was going to drop us off and go back to Lima, but the group was not there. They had some problems with their van, which were being resolved, and were going to be a little late. Finally they arrived. There were three guys from Michigan, Brian, Tom and Doug, and a couple from Utah, Kathy and Jens. They were all serious birders, but not too serious in attitude! I felt a nice sense of comfort with everyone.We also met our guide for most of the trip, Alex, who we quickly released to be an incredible birder and amazing asset.

Our main target species here was Junin Grebe. This flightless bird is only found on Lake Junin and the total population is about 200. It is classified as critically endangered. Despite this, it was easily found. We saw several birds feeding on the far side of the lake near the reeds. They had a very unusual feeding method, almost phalarope like. They would create a little "bow wave" as they swam, pushing up food in front of them. Crested Ducks and Puna Teal, both new birds for me, were also on the lake. Groups of Puna Ibis moved through. Andean Flickers were quite common, as were the cream-winged form of Bar-winged Cinclodes. Andean Negritos, a black and rust colored flycatcher, moved along the shoreline.  Even at this high altitude I saw a few butterflies.

Julio, the driver of the other van, got our breakfast for us. He was so well prepared, packing a light weight plastic table and chairs. We had granola and yogurt, along with bread, cheese, meat and fruit. He had fixed a pot of great coffee. I quickly grabbed a cup. One of the other participants said he was going to have coca tea. I knew that coca tea was widely drank in Peru, as it helps with dealing with high altitudes. In my mind I always imagined a few leaves being doled out of a rough woven bag, tossed into an even rougher pottery bowl. I was totally stunned to see Julio hand him a tea bag! Lipton cup o' coca! (Well, it wasn't Lipton, but it was a tea bag) Its completely legal, though don't try to bring some home to the US.

After breakfast Henry and Julio told us there was going to be a change in plans. Instead of going back to Lima, Henry was going to stay with us and Julio was going to take his van in to a mechanic the following day, to make sure the problem was completely resolved. Henry would  be the groups driver for that day. We packed up for our next location, a polylepis forest between the lake and our final destination for the evening. On the way, we saw a parade in the one of the small towns, with some of the most beautiful costumes. This is an area with lots of fiestas.

Polylepis forest is found just below the tree line. The trees are small and hold a very interesting community of birds. I was feeling the altitude a bit, so I decided to stay back near the van, while the group climbed up a rather muddy trail. I did see a few birds nearby, along with some butterflies. After a while they came back down, having seen Giant Conebill and a few other species. A Stripe-headed Antpitta was calling nearby, and we got great looks, which is unusual for antpittas! Alex spotted a Torrent Duck in the rushing creek.

We moved on to a different location, where we had lunch. This was a spot for one of the endemics, Rufous-backed Inca Finch. We walked up a path with Alex playing a tape, but had no luck. We did see Sparkling Violetears and White-bellied Hummingbirds. We would be returning to this area in a few days, so we weren't too discouraged. We left for Huanaco, where we were spending the night. The drive was slow, especially on the outskirts of town, where there was another fiesta going on. We checked into our hotel, went for pizza, and settled in for the night.

Here is our list for the day:
1 Crested Duck

We pride our self with proper French pressed coffee in the field and stay away from NESCAFE. You know what they say about NESCAFE......NO ES CAFE!